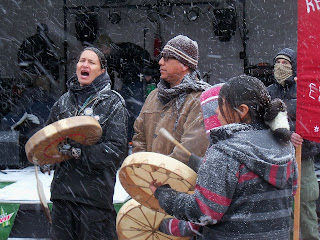 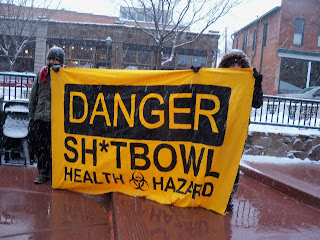 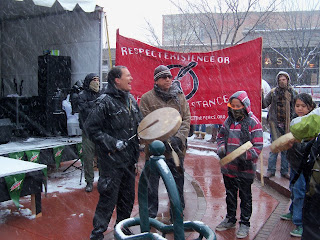 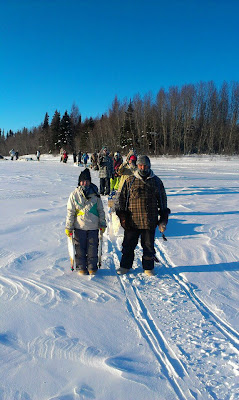 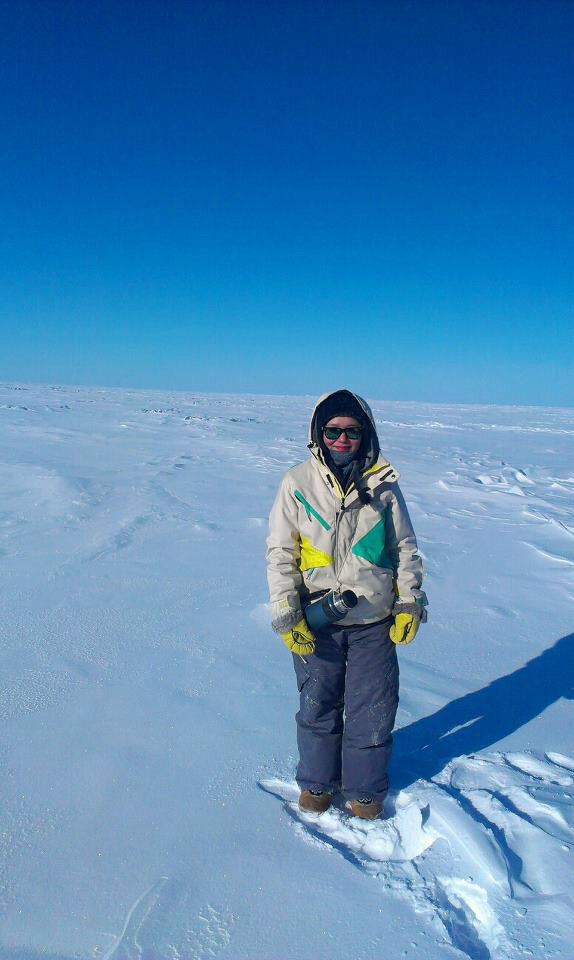 The Journey of Nishiyuu. The arrival yesterday afternoon in Wemindji.
'Ms. Tuckatuck' is the only Inuk young woman on the trek. Photos 1 and 3 by John Kawapit. Photo 2 Emily Kakabat. The youth trekkers continue on their journey to Ottawa, in solidarity with Idle No More.Saturday, Feb. 9. 2013 posted at Censored News. 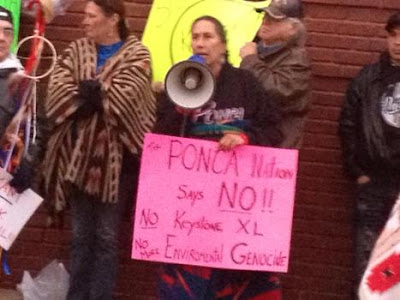 Censored News
Tonight a large group of natives from a number of tribes, as well as allies from Great Plains Tar Sands Resistance rallied and danced outside the Brady Theater in Tulsa, OK. This Idle no More event was organized to bring attention to the disproportionately high impact that industrial projects like Tar Sands extraction and the Keystone XL have on indigenous communities and communities of color throughout North America.
Casey Camp-Horinek and JoKay Dowell, speakers at the event, connected the dots between centuries of colonialism in North America and Tar Sands extraction and transportation, outlining policies as well as cultural attitudes that have made it possible to steal and the poison the land-bases of the native people of North America. They also spoke to the power of indigenous communities, drawing on centuries of resistance, to come together to stand up to these projects. The event closed with a round dance and prayer.

JoKay Dowell speaking at the Idle no More event
Casey and her family are helping us put on our training camp in March   . You should think about attending! MORE: http://gptarsandsresistance.org/2013/02/10/idle-no-more-round-dance-in-tulsa-against-the-keystone-xl/
at February 09, 2013 No comments: 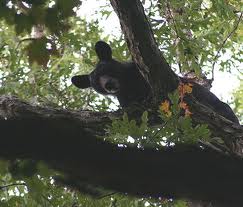 NATIVE AMERICANS WILL DANCE AT LEGISLATURE TO SUPPORT S.B. 82, WHICH WOULD PROHIBIT BEAR HUNTING IN NEVADA

On Tribal Day, Monday, February 11, 2013, at 10:00 -12:00 am, in front of the Nevada State Legislature Building at 401 S. Carson Street, Carson City, Nevada Native Americans will perform a Round Dance in support of Senate Bill 82, which would prohibit bear hunting in Nevada, and prohibit the Nevada Wildlife Commission from authorizing the hunting of black bears in Nevada.  American Indian Movement (AIM) president, Raquel Arthur said, ”We will perform a Round Dance in support of S.B. 82, and in solidarity with the Bear Nations (Nevada’s black bears).”  Anywhere from 20-50 people are expected to participate in the dance, which will include Native Americans in traditional dress, drummers and singers.

Among the reasons that the Native Americans oppose the bear hunt are:

2. The Nevada Department of Wildlife never consulted with any Nevada tribe before creating the bear hunt.

3. The bear hunt takes place where Native Americans conduct their annual pine nut harvest, principally in the Pine Nut Mountains and the Sweetwater Range, which creates serious public safety threats to their families.

Last September, members from two AIM chapters (AIM of Northern Nevada and AIM of Western Nevada) presented to Governor Sandoval Resolutions opposing the bear hunt from the Inter-Tribal Council of Nevada, which represents all 27 tribes in Nevada, and from 11 other individual Tribal Councils from all around the State.  Accompanying these Resolutions were petitions opposing the bear hunt signed by approximately 800 Nevada Native Americans from four Great Basin Tribes (Washoe, Northern and Southern Paiute, and Shoshone).

HOLLY WOOD LINCOLN
MNN. Feb. 9, 2013. Hollywood has created a new “hero”, Abraham Lincoln, for their patriotism program. President Obama swore on the same Bible as President Lincoln at both his inaugurations. In his 2009 speech he declared that “the lines of tribe shall soon dissolve”. He vowed to finish Lincoln’s Indigenous genocide program, as we are still in the path of the bankers, the governments they control and their deadly war games.
This following link is to : All Wars are Banker wars
http://www.youtube.com/watch?v=5hfEBupAeo4&list=UU2MvXVBURUwTAd30AHyN6Cg&index=1

Mr. Lincoln earned a fraudulent place in history. He signed the Homestead Act in 1862. This was a law offering huge tracts of our lands to foreign white settlement. It was put through without consultation, consent or regard for the rights and needs of our people. Eventually 1.6 million homesteads were granted on our land and 270,000,000 acres of our territories were privatized between 1862 and 1886, which is 10% of all US lands. in the conflicts that raged over this illegal action, thousands of Ongwehonwe men, women and children were killed and millions of acres of our territories remain unlawfully occupied.
Two days after Lincoln signed the “Emancipation Proclamation” in 1863, he signed an order to hang 38 Dakota in Mankato Minnesota, who were defending their people and land. There were only about 40 adult men of fighting age left out of 400 ”prisoners of war”. The US agent refused to feed the Indigenous people and was selling the rations that were meant for them. The men begged for food for their people who were starving to death. He told them to eat grass. They killed him and stuffed his mouth with grass. [www.republicoflakotah.com].

Buffalo Soldiers at Wounded Knee 1890 – helping their ‘masters’ kill & bury Lakota.
After the Civil War, Lincoln set up the “Buffalo Soldiers” 10th Cavalry regiment in 1866. The black soldiers’ job was to murder our people. They attacked us 127 times. 10 Medals of Honor were awarded to them for slaughtering our men, women and children between 1866 and 1890. They were at Wounded Knee helping their masters kill and bury our people. Lincoln set them up to protect the white invading settlers by starving and killing us. He is celebrated as a hero because of his murder of thousand of Indigenous men, women and children and the theft of millions of acres of our land.
“How do you keep a people down? You never let them know their history”.

Don’t ever forget our true history!
As Johnny Cash sang in “Apache Tears”: “The young men, the old men, the guilty and the innocent, bled red blood and chilled alike with fears. The Red Men, the White Men, no fight ever took this land. So don’t raise the dust when you pass here, they’re sleeping and in my keeping are these Apache Tears”.
http://www.youtube.com/watch?v=MCAf_Ajh_KQ
MNN Mohawk Nation News kahentinetha2@yahoo.com  For more news, books, workshops, to donate and sign up for MNN newsletters, go towww.mohawknationnews.com  More stories at MNN Archives.  Address:  Box 991, Kahnawake [Quebec, Canada] J0L 1B0
at February 09, 2013 No comments: