Hugo Chavez: How he brought heating oil to Native Americans

We lost an ally! May he rest in peace President Hugo Chavez. He supported indigenous rights by naming many indigenous people to high positions. Dr Noli Fernandez of the Wyuu Tribe as Minister of Indigenous Health. He also supported the election of the first indigenous Governor for the province of Amazonia.
I share this story:
Venezuela hosted the world gathering of youth and students in Caracas 2005.
We went  to the 1973 gathering in East Berlin with 10 others after Wounded Knee 1973. We met the Sammi people of Norway there. We spoke of the indigenous struggle and the need to protect Mother earth. I got into a fight with communist, Leninist, Maoist, and every other kind of left wings, when I stated I saw no difference between Capitalist and Communist when it came to how they treat our Mother earth.The gatherings are held every 5 years somewhere on the globe.
In 2005, Caracas hosted and I went to see if things had changed and quickly got into the same argument with Communist at a rally.  President Hugo Chavez was about to speak. Chavez security took me into their offices and asked why I was in the heated argument with the American Communist Party leaders. They had promised me a table to put out Indian struggles, a time to speak I told them and to show a powerpoint of these struggles.
After viewing my powerpoint , they stated if they had seen it 10 minutes earlier, it would have been the back drop for President Chavez speech on US imperialism. They quickly apologized for the way that I had been treated by the USA Communist and asked if I would join the special seats by President Chavez.
They asked if I was hungry, (YES I was) and brought me food. From up on the platform by Chavez I turned and saw all the communists and flipped them the bird.
President Chavez started his speech.
Later, when back home, I was contacted by the Venezuelan Embassy and asked what I thought of their country. I had seen great efforts for the poor and great respect for indigenous people, and I asked if they could share their wealth in heating oil for the tribes and poor in the USA.
President Chavez accepted this challenge and had Citgo oil company of Venezuela work with Embassy staff to implement. They called me one night in December 2005 and asked which tribes were ready to receive and I directed them to the 4 tribes of Maine as the first to receive what would eventually be part of the 40 million gallons of heating oil to tribes and poor across USA. That was the ally we had!
Robert Free
robtfree@gmail.com 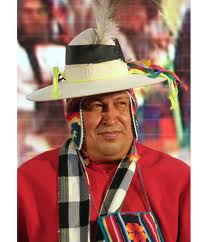