MNN. Mar. 10, 2013. It’s an art! Canada has attacked us many times, Gustafssen Lake, Ipperwash, Six Nations, Oka, Burnt Church NS, etc. We’ve studied and learned their Modus operandi. For the 1990 crisis in 3 Mohawk communities, Canada brought in Col. Musgrave, Britain’s foremost expert on psychological war tactics. He was the brain behind the failed tactics against the Irish. He failed with us too. He arrogantly announced that in 3 weeks we would break down mentally and psychologically. 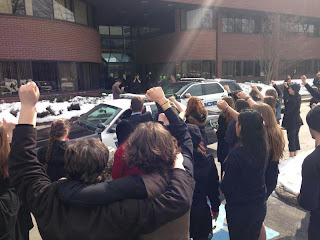 Westborough, MA – On Monday morning, over 100 students and community members marched into TransCanada’s Westborough office and held a funeral mourning the loss of their future at the hands of the Keystone XL Pipeline, which would transport the tar sands that climate scientists say will lock us into irreversible global warming. More than 25 protesters were arrested for refusing to leave the office in an act of civil disobedience.