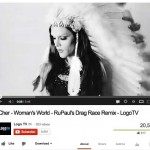 The look is an apparent homage to Cher’s 1973 video performance of “Half Breed”
where she wore a similarly styled headdress while riding a horse and singing. Watch it here: https://www.youtube.com/watch?v=Z6E98ZRaU1s
While the video may not go as far as No Doubt’s recent “Looking Hot” debacle,
it still perpetuates a trend that is best addressed at NativeAppropriations.com.
Follow the link to read, “But Why Can’t I Wear a Hipster Headdress?”
http://nativeappropriations.com/2010/04/but-why-cant-i-wear-a-hipster-headdress.html
The song “Woman’s World” is from Cher’s upcoming album “Closer to The Truth,” apparently
this video’s supporters are a bit closer to hate.
Read some of the Youtube comments below including one posted through
our youtube site that received so many negative votes it is now hidden:
Read more:
http://www.indigenousaction.org/cher-remix-video-brings-out-the-hate/

Native Youth Media: Help them get to Shiprock Fair to sell organic coffee!

By Outta Your Backpack Media
http://oybm.org/

Update: They've reached their goal, but you can keep buying their coffee! Thanks, Censored News

We are half-way through our crowdfunding campaign and it has been a wonderful experience! Thank you so much to everyone who has contributed so far. We have had tons of interest and support, culminating into 80% of our goal of $1200 reached. Not to mention we still have 1 week left, we are hopeful that we can reach this goal.
We had not been idle in the least since we started our campaign. We have had two meet ups and training sessions! With more training and practice we will be ready to warm the hearts of all those Fair go-ers (maybe even with some latte art!).

As of this point we are getting ready to restock our eco-friendly paper cups and straws, gather the rewards together for our donators, and determine how our booth set up will look. Any suggestions? We’re thinking maybe laying down some sod to keep the dust down inside the tent, then again, yeah, maybe not, someones crazy tł’ízí is going to eat it all!
We hope to see you all there. Don’t forget to donate if you haven’t yet and spread the word!!
Thank you so much again to everyone who has donated, once the campaign has ended we will start sending out the rewards if you are not in the area. We will be contacting many of you to determine how you would like to receive your reward.
Again, big thanks to all our supporters!!
Go to campaign: http://oybm.org/dibebiccino/campaigns/shiprock-2013/

MNN. Sept. 5, 2013. Corporate rulers know only war. Everything they have is stolen. The original lie is hierarchy. Constant war is needed to maintain the lies. The policy of total extermination of Indigenous people has never been rescinded. To kill us off the banker/war mongers pulled the strings of their politicians in their pretend democracy. They ordered them to vote for war.

Just give me $100 and we’ll let you be part of the Syria rebuilding team!”
The reason to attack Syria is real, imagined or staged. Syria doesn’t owe money to the World Bank. They have to be plunged into debt to the bankers by destroying their country. The US-funded rebels are corporate paid mercenaries, as were the Hessians in 1778. The Revolutionary War and Civil War were scams to create an army to annihilate us. They created and trained the “Buffalo Soldiers” of freed black slaves to murder us.
The US argues that not going to war would damage their ability to keep telling lies. The donors are telling their politicians, “This vote to bomb Syria is very important!” The politician’s district and large international bankers are going to benefit from the war.
Investors know the politicians through the checks they give them to put them in power. They collect “you owe me” points.
The bribers are called “lobbyists” who pay off the weak-minded politicians. They march into their offices, carrying a bag of money. If they don’t like what they hear, they come back. The politicians can get voted out. “It matters not who wins the election. Only who counts the vote!” [Joseph Stalin].

The US Congress and Senate protect the war economy. The US president is the master of war who makes sure it continues. He is the only one in the world who can “legally” declare war on anyone he deems necessary for the bankers.
The politicians are publicly buttonholed on the floor of the House to show us who owns everything and everyone. They have to vote “the right way”.

More war does not end war. The politicians and their corporate backers created and own the game.
Dekanawida and Jigosaseh told us that we cannot allow anyone in our territory who is engaged in war. The corporate serpent has weaved its way into every aspect of our lives. We are beginning to comb these serpents out of our own hair. Sceptics abound. ‘Cause you made so many promises and now it seems you were just yappin’/What happened to Guantanamo, what happened to the jobs/What happened to transparency, it’s still as thick as fog‘. “Blame It On Bush”. 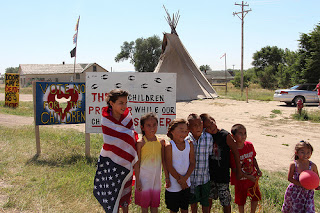 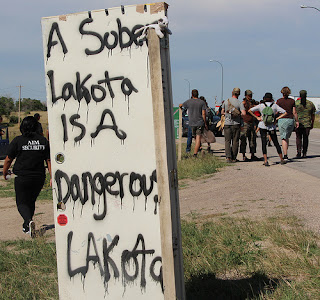 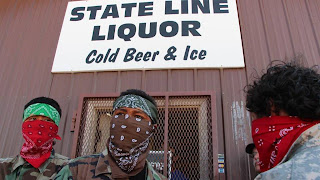 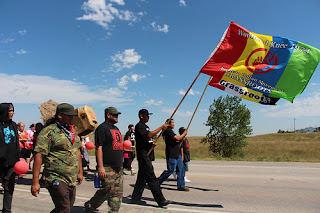 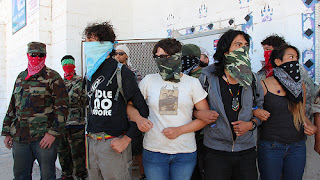 WHITE CLAY, Neb. -- On Monday morning, September 2, protesters swarmed and created a road block for cars leaving Whiteclay. Activists marched through the town and blocked entrances into the various liquor stores. Today’s action is part of an ongoing campaign to stop liquid genocide on the Pine Ridge Reservation.

The town of Whiteclay is less than 300 feet from the border of Pine Ridge, where the sale and consumption of alcohol is prohibited. While Whiteclay has a population of 14, there are 4 liquor stores in the town, selling 13,000 can of beer each day mostly to the Oglala Lakota in Pine Ridge making $34 million in revenue annually. 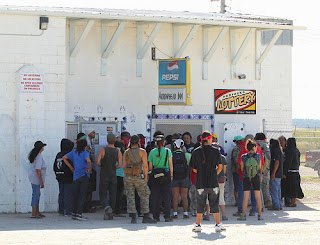 Lauren Lorenruiz came from Salt Lake City, Utah to stand in opposition to liquor sales, “The reason I am here today is because Whiteclay is poison. What we are seeing is a place of exploitation, a place of wrong-doing. These kinds of establishments are designed solely to destroy people so its profit over people and its inherently wrong. It has been tearing apart the Lakota people for over 100 years and we’re ready for it to stop.”

A protestor from Connecticut said, “As an ally to the Lakota people I think that solidarity is in sacrifice. As a non- native white person I have a form of privilege that I can bring attention to these issues.”

Two days earlier, people from all over the country marched into White Clay for the second annual Women’s March and Day of Peace to bring awareness of the harms caused by alcoholism. 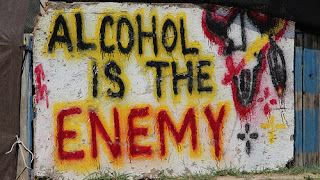 Even with the highly contentious vote to legalize alcohol in Pine Ridge Pine Ridge activists remain undeterred. Present at the Women’s Day of Peace, Oglala Lakota activist Olowan Martinez spoke to how alcohol has had a devastating impact on the people of Pine Ridge and continues to be used as a chemical weapon of genocide against the Lakota people and their culture to this day, “They use alcohol to trick us and now we trick ourselves.”