Dine' Walk against Fracking 'Our Journey for Existence!'

Censored News
Nihígaal bee Iiná
Update: Wednesday, Jan. 7, 2015: Ya'aht'eeh Abiní. I know many of you have been wondering what the route is. We covered 12 miles yesterday from Dził Náá'ooldiłi to Nageezi. Here is the plan for the rest of the week. Today we plan on covering as many miles as we can, Chaco is our next destination and its approximately 24 miles. We expect it to take 2 days. Afterwards it's back to 550 to Counselor. We are asking for your prayers as we journey into the heart of the fracking boom.

On January 6, 2015, we will start from the fireplace and doorway of Diné Bikéyah, at Dził Nahodiłii (Huerfano, NM), the homeplace place of our people, which is threatened by fracking. There are over 400 proposed drill sites and within the past couple months over 100 have been started in the region. From there we will walk to communities through the Eastern Agency, and then to Tsoodzil (Mt. Taylor, Grants, NM) which also threaten by uranium mining. This first leg of our journey will be 200 miles, and will take us approximately 3 weeks.
In the seasons to come, we will extend our walk to the other mountains and regions of Diné Bikéyah. To Doo’o’k’osliid (San Francisco Peak, Flagstaff, AZ) in the Spring, the Dibé Ntsáá (Hesperus, CO) in the Summer, and in the fall we will go all the way to Sisnajiní (Blanca Peak, Alamosa, CO). All combined, we will be walking over 1000 miles in 2015. 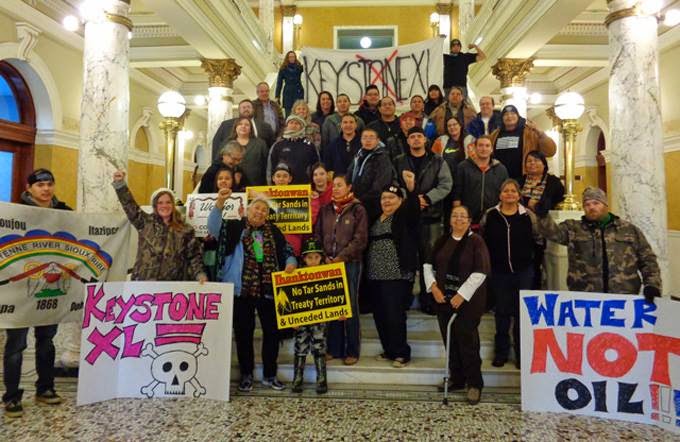 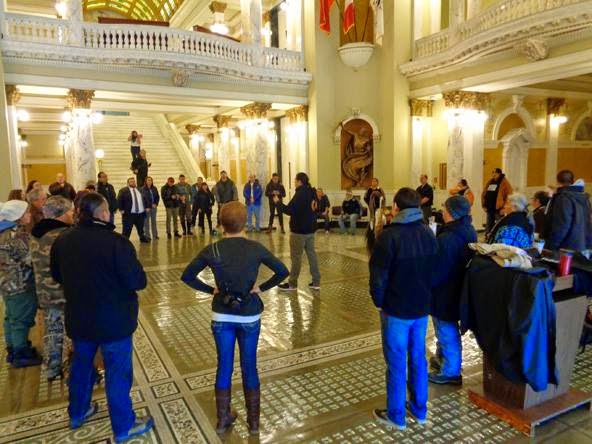 Thank you to Gary Dorr for sharing your photos with Censored News!


PIERRE, SD, - A grassroots coalition of landowners, native leaders, and allied supporters are taking action across South Dakota this week to protest the proposed Keystone XL pipeline and raise awareness of the unified opposition to the project. These actions will precede the South Dakota Public Utilities Commission meeting on and an US Congress KXL bill vote expected to take place on Friday, the coalition said in a statement.
The No KXL Dakota coalition is pushing back against renewing pipeline developer TransCanada's permit for the section of the $8 billion oil sands project that goes through the state.

The South Dakota Public Utilities Commission will meet on Tuesday to hear a motion to dismiss the permit renewal application filed by the Yankton Sioux Tribe.
“The movement to stop the Keystone pipeline is growing in South Dakota,” said Joye Braun, Cheyenne River Sioux Tribe member and activist. “We will continue in our efforts to build resistance to this project knowing that we will succeed.”
This grassroots coalition is called NO KXL DAKOTA and is comprised of South Dakota ranchers, farmers, citizens of Lakota/Dakota nations, the Indigenous Environmental Network, Dakota Rural Action, and other South Dakotans. Many of these coalition members are among the 40 parties that have filed to intervene in Transcanada’s application for a Keystone XL South Dakota permit re-approval.
“One of the great things about South Dakotans is that we pride ourselves on common sense, and resiliency,” says Vermillion resident Alice Alexandrescu. “Both of these traits are dishonored by the proposed Keystone XL pipeline. We are turning away from hydrocarbons, the oil tycoons are growing desperate and they are trying to make us feel desperate too. We're smarter than that."
TransCanada filed for certification on September 15, 2014. The PUC will hear a motion to dismiss the application outright, filed on behalf of the Yankton Sioux Tribe.