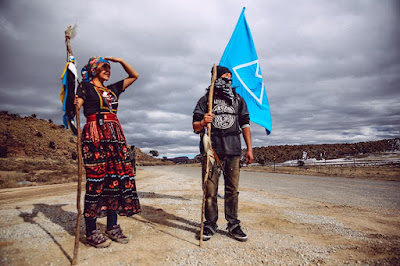 Dine' Walkers on foot to the sacred mountains on the Navajo Nation, walking for future generations

By Nihigaal bee lina
Censored News
Today we have 22 miles to walk! We started at the gas station at Bodaway/Gap this morning and are heading to Coppermine on highway 20! WE NEED A FEW ITEMS TO SUSTAIN THE WALKERS:Eggs, Potatoes, Cheese, Baking Powder, Flour, Cooking Oil, Salt, Fruit, Fresh Produce, ICE
We are calling out to our DINÉ WARRIORS to take a stand in protecting our homelands and carrying on our way of life. We are in a CRISIS. As we walk, we are seeing our beautiful homeland being turned into a toxic waste land that we will not be able to live on. What happens to the land happens to the people. In many communities our people are unable to drink the water, breath the air, and are plagued by illness. Things will only get worse if we DO NOT take action. Come walk in prayer as we journey to our sacred places and make the offerings our ancestors have always made to reaffirm our way of life. Our collective prayer is that our young people fulfill our ancestors' prayers by realizing the beauty in the land and rise to defend our home. It is up to us!
at July 02, 2015 No comments: 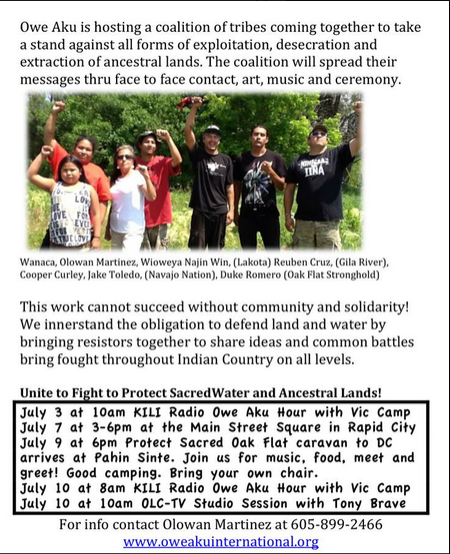 Please post & distribute. Nia:wen.
MNN. JULY 2, 2015. All those who took an oath to the CROWN are guilty of genocide of ongwe’hon:weh. All the wrongs to us and our mother have to be made completely right to the “satisfaction” of the Great Peace. These criminals and all those colonial settlers who are benefiting from the genocide must be charged, tried and punished. Politicians and their corporate handlers are jumping ship to escape standing trial, moving to new countries and hiding their stolen loot.

Drag Queenie.
Stephen Harper’s personal friend, Arthur Porter 59, was to be extradited soon to Canada from Panama. He died suddenly and alone before he could be tried for fraud and bribery related to the $1.3 billion hospital project in Montreal. He was also Harper’s appointee in 2011 as head of the security intelligence review committee to oversee CSIS. He took many secrets with him to the grave, if in fact he is dead! Just how many criminals or who are charged with criminal acts are in the Conservative government?

Before the thieves fell out.

Stephen “Revenge-of-the-Nerds” Harper thought he could destroy a world that didn’t give him the respect he wanted. The radical evangelicals make a whore of Christianity to carry out their own designs. All ongwe’hon:weh and other genocided people worldwide know this. Harper is trying to outlaw any resistance to his designs under Kangeroo Admiralty matrix to take over our land mass and resources and become a country. So far over 100 million of us were slaughtered and robbed using obscene Bulls and doctrines from the Vatican. He tried to complete the job for the bankers. The mother kept us strong and we did not allow them to finish the genocide. His masters will repurpose and reward him for services rendered.

After the rats all left the ship.
In Parliament and the backrooms, the shit is mounting to their hips. Even the dummies know that it’s time to make like the rats they are, and get out while they can. If Mulcair wins the election, he promises to get a constitution ratified, get rid of the C51 anti-terror bill, stop pollution, no pipelines, remove protection of oil companies and reinstate environmental protection laws. He is beholden to the same inhuman monsters. His backers know that if voting could change the system, it would be outlawed. The system has and is at fault. All ongwe’hon:weh know the path forward. It is the Great Peace and the tekanoronkwatsera. If the Europeans etc. are smart, they will follow us. What greater proof of the truth of our way than that it could even save those who have done such great evil.

The best slaves are those who think they’re free.
International law has pledged to back the genocide treaty. The Truth and Reconciliation Commission proved that the CROWN is guilty of genocide. Nothing will change until all the CROWN criminals in all areas of the corporate government, judicial, banking, finance and Privy Council answer for their crimes. When everything has been made right, they can start anew following the Great Peace and the clan system of governance. So be it in our minds.

Neil Young sings about the “Monsanto Years”
when the big conglomerate tried to falsely convince us that mother nature doesn’t own the seeds anymore: “When you shop for your daily bread and walk down the aisle of Safeway, Safeway, find the package to catch your eye that makes you smile, at Safeway, Safeway. Chose a picture of an old red barn in a field of green with a farmer and his wife and children to complete the scene at Safeway, at Safeway”.