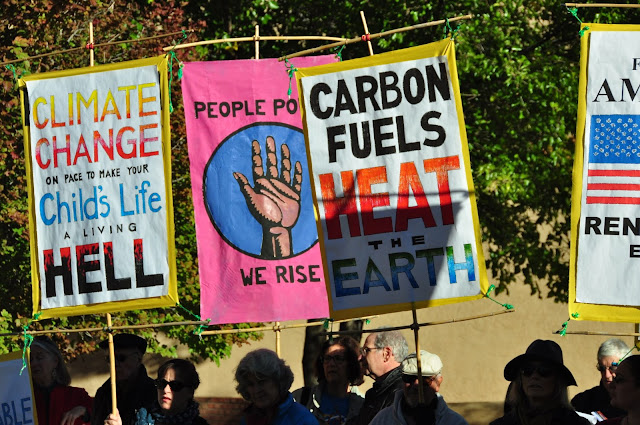 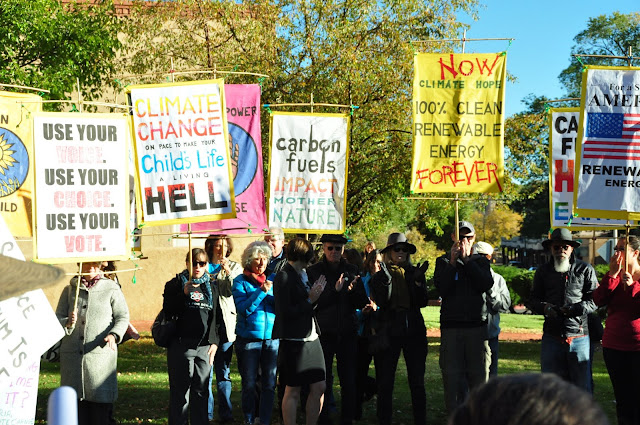 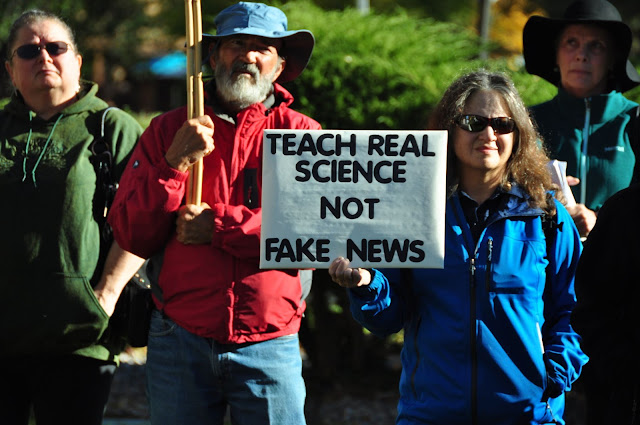 Hundreds of New Mexicans spoke Monday in opposition to the New Mexico Public Education Department's politicized edits to the Next Generation Science Standards, removing references to climate change and the age of the Earth for its proposed public-school science curriculum.


Speakers urged the state to adopt the unedited Next Generation framework, which was developed by the National Academy of Sciences, National Science Teachers Association, American Association for the Advancement of Science and Achieve. Every commenter at Monday's hearing opposed the politicized edits. Below are excerpts from today's Rally for Quality Science Education:

Ellen Loehman, New Mexico Science Teachers Association (loehman@msn.com or Deb Thrall, NMSTA past president, 505-350-0530)
"The New Mexico Science Teachers' Association and its members voted in 2013 to support adoption of the Next Generation Science Standards. They have continued to advocate on behalf of the NGSS, in full, as written. They do not accept the 'tinkered' version of standards proposed by the New Mexico Public Education Department."

Sister Joan Brown, osf, New Mexico Interfaith Power and Light (joanbrown@nm-ipl.org, 505-266-6966)
"Faith leaders from Jewish, Muslim, Bahai, Buddhist, Indigenous, Christian and other faiths agree with science that humans are in part responsible for climate change. Pope Francis and the Papal Academy of Science concur with scientists on this fact and many other scientific facts.
"We need to educate our children of all faith traditions with sound science, because they will be making ethical and moral decisions into the future. Education and decisions affect those who are suffering and most vulnerable to climate change, and this is not debatable. In general, religion and science are not in conflict. According to a recent Pew poll, 83% of those polled saw no conflict."

David Craft, meteorologist for central and northern New Mexico (505-243-0702):
"Climate change has already impacted New Mexico with 1.8 degrees Fahrenheit of warming in annual average surface temperatures over the past 100 years, and a disproportionately large number of daily record high temperatures compared to record low temperatures.
"A 2017 analysis found that 140 of the world's top scientific institutions and national academies have issued statements affirming the reality and dangers of human-caused warming. Kids need to understand the science behind this strong consensus."

State Rep. Bill McCamley, chair of House Labor and Economic Development Committee (575-496-5731):
"These changes are bad for kids, they're bad for jobs, and they're bad for our future. That was proved when the secretary of Education didn't even show up to listen to people today. If this were something that the Education Department were proud of, he would have been there."

Meredith Machen, League of Women Voters New Mexico
"The NGSS are free and are already being used in 18 states. Teachers across the nation are excited about developing and sharing curriculum with their colleagues, and much is available as open source to supplement new textbooks that will be necessary. In contrast, NM STEM Standards would require customized textbooks.
"What happened to the reasoning and the oft-stated goal of giving New Mexico's students a world-class education that will make them successful in college and careers?"  See full LWVNM statement here.

Jeremy Sment, parent and scientist
"The changes and omissions were made to sneak an opportunity into the rules for an ideological teacher to misinform New Mexico's students on evolution and climate change and leave them unprepared to go to work on the needed solutions."

Richard Ellenberg, Democratic Party of New Mexico chair (rdellenberg@gmail.com)
"We care that our children, our grandchildren and the children of New Mexico are fully educated in science. Each child needs to be assured that as he or she looks for an answer, they can follow the trail where it leads and not be stopped by government censors."

Jeremy Sment, jeremy.sment@gmail.com
Photos will be added throughout the day here