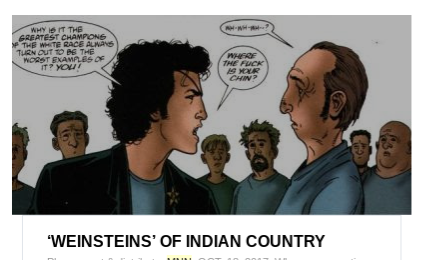 Mohawk Nation News
Please post & distribute.
MNN. OCT. 18, 2017. When young native girls go out for jobs, they are immediately targeted by sleazy predators for sexual abuse. In a lawyer’s office the 19 year old native was asked to stay after work and take some dictation. After everybody was gone, this slime tried to stroke her back and neck and to drag her onto his couch. She fled and never went back, not even for her pay. Years later she saw him at the courthouse. Shaking, she reminded him he owed her money. He smiled, “No. It’s past the statute of limitation!”