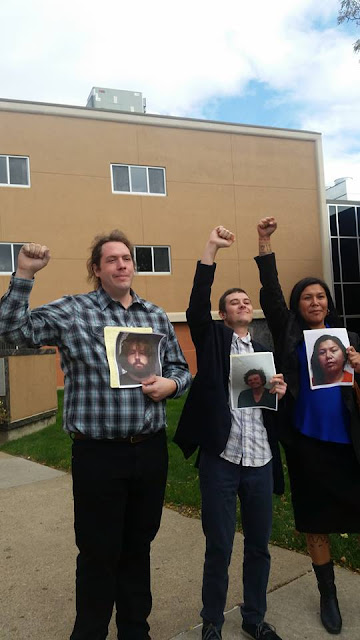 Kanahus Manuel said, "All five Standing Rock charges dropped today against myself and two others! Now we call on North Dakota to drop all charges against all Water Protectors. Free Red Fawn. Free Little Feather. Free them all!"

In the news at CBC:


All charges have been dropped against a Secwepemc activist from B.C. after she was arrested during the Standing Rock protests last year.
Kanahus Manuel was among dozens of people arrested near the construction of the North Dakota Access Pipeline Oct. 22, 2016.
She was in a courthouse in Mandan, ND Tuesday to face charges of criminal trespass, engaging in a riot, obstruction of a governmental function, disobedience of a public safety order during riot conditions and disorderly conduct.
She said Tuesday afternoon she was cleared of all charges and free to go home.
"They didn't have sufficient evidence," she said. "I'm feeling relieved."
Read more: http://www.cbc.ca/news/indigenous/kanahus-manuel-court-standing-rock-1.4318847
at October 05, 2017