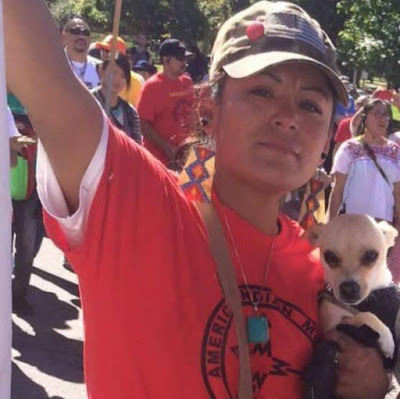 Message from the legal team of Red Fawn
On October 27, 2017 --  the anniversary date of her arrest -- Red Fawn Fallis was released from the Stutsman County Jail to a half-way house in North Dakota.
Red Fawn, a Lakota water protector originally from the Pine Ridge Reservation, is scheduled to stand trial in federal district court on January 29, 2018 on multiple charges stemming from her participation in the protests surrounding construction of the Dakota Access Pipeline. The path of the pipeline lay in close proximity to the Standing Rock Sioux Reservation and its water source and traversed lands of historic and cultural significance to the Standing Rock Sioux Tribe.
Red Fawn has plead Not Guilty to all charges. Her trial was recently moved from Bismarck to Fargo, North Dakota due to the publicity that has surrounded both the opposition to the construction of the pipeline and to Red Fawn’s arrest.
Red Fawn is well-known and respected for her role as a medic and community leader at the Oceti Sakowin camp during fall 2016.
LomaStar Cleveland
Red Dawn
Annie Chow
Arrow Banks
at October 27, 2017 3 comments: 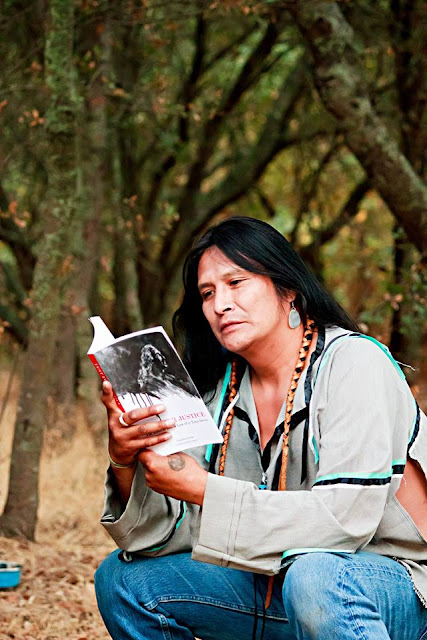 Salina, KS – Saline County Jail inmate Ni’i Ne’e, an indigenous man of Diné heritage, was assaulted in the courtroom by Saline County officers during a hearing on Tuesday, October 10th.

A letter received from Ni’i Ne’e dated October 10, 2017 detailed the assault during the hearing:

“[Saline County Attorney staff Mike] Rogers grabbed the handcuffs and my wrist, bent it back [while] the other officer (unnamed) grabbed the shackles and lifted both my legs up off the ground. [Saline County Sheriff’s Deputy Mark] Trostle had his bare hands around my throat, trying to choke me unconscious; I kept yelling at them to stop, they bent my wrist back more and Trostle was choking me harder, I could breathe only thru my nose. I was gasping for air trying to breathe…I wanted to be escorted out before I was FORCED to participate...Trostle and Rogers said they had to hold me in the courtroom until [judge Patrick Thompson] said to get me out of there...Luckily there were witnesses & camera in the court & other officers…”

Ni’i Ne’e was seen by Saline County Jail Nurse Ott and later placed in solitary confinement, where he has remained for over 2 weeks, for “(1.44) disorderly conduct, (1.38) disobeying orders, and (1.36) fail[ing] to comply with court,” according to a Saline County Notification of Rules Violation written up by Deputy Trostle.

What makes Ni’i Ne’e’s case unique lies in his resistance of the US judicial system through “asserting his sovereign rights as a native national.”

In his letter sent from solitary confinement, Ni’i Ne’e remarked, “I went into the courtroom, again [Judge] Patrick Thompson was already talking on the record, the court reporter was typing…I clearly spoke to her that the social security number that is attached to the title of the case may not be used for identification purposes.

“[Judge Thompson] started talking about [how] he has jurisdiction. I said ‘You don’t have the authority over me. I am not participating in this commerce court’...I said to [Thompson] from where I was sitting that we have a conflict of interest here, before he forces his will, that I have to put in the Mandate Order for him to Recuse himself, that I will not receive any fair hearing or trial. He continued to assume his position...I demanded that I be escorted out of the court until these matters were addressed.

“They needed me in the courtroom even if they FORCED me in there and held me and choked me, my physical body, so they can act like I went along with their hearing.”

Ni’i Ne’e carries a passport/driver’s license identification card issued through the Lakota Free and Independent Nation. He was detained on the night of July 25, 2017 for driving without a valid driver’s license and marijuana charges. He has since been held at Saline County Jail while defending himself in court.

A sovereign national of Diné Bikéyah, Ni’i Ne’e has formally renounced his forced US citizenship, including his SSN through the Social Security Administration. He has won seven court cases in four states, representing himself, that “validate [his] sovereignty in a municipal court,” most recently in the state of New Mexico.

Ni’i Ne’e has dedicated years of his life to fighting for not only his own sovereignty, but for that of his people. Much of this work has been through resisting the corruption of the US judicial system and the Social Security Administration. In his words from the 2015 video “I’m Not Your Citizen,” NI’I NE’E SPEAKS (2/2), “these District Attorneys and Attorney Generals are convicting my people, my relatives, as citizen aliens when in fact they are sovereign nationals. [The US courts] have no jurisdiction over Indigenous people of Turtle Island. The judges are committing genocide every day, across not only the Diné Bikéyah and the Lakota Sioux Nations, but from the head of Turtle Island to the tail end. We have been the subjects of genocide in a different way now, systematically, enslaving my people as citizens and aliens on our own land.

“I ask my people to take a look at these (social security) documents and try to better understand why it’s the way it is, for the next generation, for our children, our grandchildren. Give them direction. I’m not a spokesperson for anybody. I just take it upon myself with a good heart to inform the ones who will listen. I can't make you do anything, but I wouldn't tell you to do something that I haven't done myself. And now I have the documents that will show to you that I am making business, sovereign to sovereign nation, with no ‘slave surveillance number.’ I’m not your number. I’m not your citizen.”

Please post & distribute
MNN. Oct. 25, 2017. A 15 year old native women had been seriously injured in a bicycle accident. The handlebar had gone into her vagina and pulled out her cervix. The reserve doctors pushed it all back in and sewed her up, telling her, “You will never have children”.
Read article at Mohawk Nation News
http://mohawknationnews.com/blog/2017/10/25/eugenocide-ism/
at October 27, 2017 No comments: