The memos devote a lot of space to future protests and lobbying on Parliament Hill by native groups, including the activities of the Assembly of First Nations, the Algonquin Anishinabeg Nation Tribal Council and Red Power United.

The Canadian military is keeping a watch on aboriginal groups through an intelligence unit that is meant to protect the Forces and the Department of National Defence from espionage, terrorists and saboteurs. The Canadian Forces’ National Counter-Intelligence Unit assembled at least eight reports on the activities of native organizations between January, 2010, and July, 2011, according to records released under access to information law.

“Canada is required by its international obligations to arrest and prosecute former President Bush given his responsibility for crimes under international law including torture,” said Susan Lee, Americas Director at Amnesty International.

“As the US authorities have, so far, failed to bring former President Bush to justice, the international community must step in. A failure by Canada to take action during his visit would violate the UN Convention against Torture and demonstrate contempt for fundamental human rights.”

Amnesty International submitted a memorandum to the Canadian authorities on 21 September 2011 that makes a substantial case for the former president’s legal responsibility for a series of human rights violations.

The violations took place during the CIA's secret detention program between 2002 and 2009 – and include torture and other cruel, inhuman and degrading-treatment and enforced disappearances.

While President, George W. Bush authorized the use of a number of “enhanced interrogation techniques” against detainees held in the secret CIA program.

The former President later specifically admitted to authorizing the “waterboarding” of several individuals whose subjection to this torture technique has been confirmed.

Detainees were subjected to waterboarding and a range of other “enhanced interrogation techniques” – including being forced to stay for hours in painful positions and sleep deprivation – during the CIA’s secret detention program, set up under then-President Bush’s authorization.

The CIA Inspector General found that Zayn al Abidin Muhammed Husayn (known as Abu Zubaydah) and Khalid Sheikh Mohammed were subjected, between them, to at least 266 applications of waterboarding while in detention between 2002 and 2003.

Amnesty International’s submission also highlights further evidence of torture and other crimes under international law committed against detainees held under US military custody in Guantanamo, Afghanistan and Iraq.

“This is a crucial moment for Canada to demonstrate it is prepared to live up to its commitments and obligations with respect to human rights,” said Susan Lee. “Canada has been a leader in efforts to strengthen the international justice system and must now demonstrate that when it comes to accountability for human rights violations, no one and no country is above international law.” 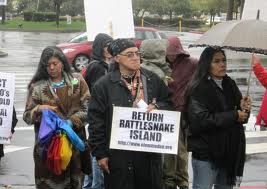 
EMERYVILLE, Calif. -- At Noon on October 10th, over 100 people gathered in Emeryville, Calif., in support of the Elem Pomo tribe’s ongoing struggle to protect and reclaim their ancestral land at Rattlesnake Island (Clear Lake, Calif.). Bay Area multi-millionaire John Nady is attempting to build a vacation home on top of the ceremonial grounds of the island, which has been the spiritual and political center of the Elem tribe for over 6,000 years.
Elem traditional leader Jim Brown participated in the demonstration, alongside other tribal members. “I want to thank all you souls and you strong spirits for being here and supporting our tribe. Today we are going to making a statement and we are going to present this to Mr. Nady. This statement declares that we are taking back our aboriginal rights, because the state of California did not legally extinguish our rights.”
The demonstration began at the infamous Bay Street (“Dead Street”) Mall, which is built directly on top of what was once the largest shellmound in the San Francisco Bay, an ancient burial ground and monument of the Ohlone people. Undeterred by the rain, the crowd stood at the busy intersection holding dozens of signs and banners carrying messages such as “Nady: Stop Desecrating Sacred Sites” and “Return Rattlesnake Island”.

Morning Star Gali of the Achumawi Pit River Nation also greeted the demonstrators. “We are here in celebration of Indigenous Peoples day to show that as native peoples we are still here, that we are alive, and that we are strong. And that our ancestors are right here with us, and they brought us here together.”
Just before the march departed from Bay Street Mall, Jim Brown asked everyone to stand for a moment in prayer. “I would like to take a moment of silence here before we go, to remember many of our ancestors that have died in the genocide of California–the holocaust that took place that the State of California is in denial of–and in the spirit of Leonard Peltier, and Troy Anthony Davis, and all the Elem members. We thank you for your strong spirits. We need to stay together.”
After Jim Brown shared a blessing song, and the crowd poured out in to the street on a 1-mile route to the headquarters of John Nady’s audio equipment company, Nady Systems. “We ask the grandmothers to bless us. Lets go.”
Marchers chanted “Protect Rattlesnake Island…Protect Sacred Sites” and Ohlone prayer songs could be heard from afar, above the din of the freeway. Many passing cars honked their horns in support, and everyone cheered when a semi-truck driver blasted his horn, fist raised in the air.

A spirited crowd reached Nady Headquarters to find that the entire property had been cordoned off with “Police Line- Do Not Cross” tape, and no less than seven Emeryville Police Officers were standing in an evenly spaced formation in front of the building, arms crossed. The police stated that Nady Systems was closed for the day and that the whole area is private property.
Though employees of Nady Systems had previously stated that they would be open on “Colombus Day”, John Nady had obviously caught wind of the protest. A demonstrator shouted out, “I’m wondering which it is, did they decide to close in recognition of Indigenous Peoples Day, or are they just afraid of us?”

After a song was shared around the drum, Elem Pomo representative Jim Brown read aloud the formal declaration of the Elem Modun people, which asserts aboriginal rights and title to their traditional lands. “Mr. John Nady, you are hereby notified to immediately cease and desist any further desecration and pillaging of our traditional cultural resources and homelands on Rattlesnake Island.”

Since the declaration could not be hand-delivered as Elem representatives had intended, Morning Star Gali spoke through a megaphone at the police officers, asking that one of them come forward to receive the declaration. Gali asked the officer to place the document in the building’s mail slot, however, the officer offered to deliver it to millionaire John Nady personally. He stated that though he may not see Nady right away, he could definitely give it to Nady “tomorrow or the next day.”
As a closing for the demonstration, the crowd circled around a drum to sing the American Indian Movement honoring song. Spirits were high as the soaking wet demonstrators turned to make their way back, inspired by the clear vision and strong determination of the Elem People.

Elem representatives asked everyone to be prepared to respond to future calls for support in what is certain to be a long-term struggle to protect and reclaim their traditional lands. Jim Brown explained that this struggle is significant in its potential for helping to bring the Pomo Nation back together.
“We need to show that we are one nation broken up and colonized by the state of California, into 17 different Pomo tribes. Our tribe encompassed five counties, from Lake County all the way to the coast. That is our traditional lands, our homelands, and we are going to reclaim those resources. We need to teach our children the true meaning of this history, the true meaning of our people, and how we can unite. Our elders tell us to close our eyes, and let our hearts see– then we will all be one nation, under this land. “
Jim Brown also explained that part of Elem’s vision is for their actions to inspire other tribes across California. “We as traditional nations need to take back our aboriginal sovereignty rights and chase these foreign governments out of our lands. That’s what we need to do, and turn it back over to the people. And I hope all other tribes as well step up, because every tribe in the state of California could use the same laws to get their lands back. We need to get Elem to set the precedent, and we need all of you supporters to understand this. “
Elem representatives will deliver their declaration to the Lake County Board of Supervisors during a scheduled meeting on Tuesday, October 18th at 1:00pm. They are requesting supporters to join them–details TBA.
A collection of photos from the action can be found here:
Photos: March to Nady Headquarters in Emeryville, Oct. 10, 2011.