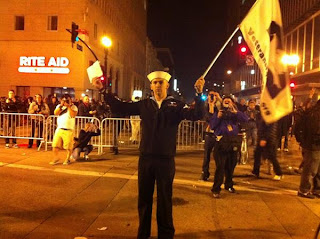 Ojibwa First Nation Chief Terrance Nelson of Roseau River will be at Occupy Minneapolis this week, to speak out against the tarsands, urge a boycott of Walmart and to expose the truth of what America is doing in the Middle East.

“With the death of Gadhafi, Bin Ladin, and Hussein, Americans are no closer to freeing themselves from being held hostage to Big Oil,” Chief Nelson said. “The situation in the United States is critical. Americans are being asked to celebrate the death of Gadhafi and are being told that the leadership in North Korea, Iran, Venezuela, etc., are next."

Chief Nelson, vice chair of the American Indian Movement, wrote Clyde Bellecourt, AIM national leader, to accept the invitation to come to Minneapolis. Chief Nelson will be in Minneapolis on Wednesday for a press conference and on Thursday at 10 a.m. and for a meeting with Occupy Minnesota. He will also be there for an evening meeting.
Chief Nelson said he would address the issue of Alberta’s tarsands, fair trade and Big Oil at Occupy Minneapolis.

Chief Nelson said, “In the last ten and half years Canada has purchased $2 trillion worth of American exports while China purchased $534 billion worth of American exports. America has an accumulated trade deficit of $527 billion with Canada in those years but the trade deficit with China is $2 trillion in that same time period. If the Occupy Minnesota people want to make international economic impact, they need to organize a one-week boycott of Walmart. I will provide the information on why that will be effective and what demands Americans should be making of China and Canada.”

“With the death of Gadhafi, Bin Ladin, and Hussein, Americans are no closer to freeing themselves from being held hostage to Big Oil. Four thousand American soldiers have died in Iraq. I was in Iraq in April 1998 at the invitation of the Hussein Government to document first-hand the effects of economic sanctions on the people of Iraq. Big Oil keeps us in wars to defend the national security interest of bringing in over 12 million barrels of foreign oil each day to the United States. Meanwhile the average American is
held hostage to paying four dollars a gallon for gasoline. America has a $14 trillion federal debt to be paid by youth.”

Chief Nelson said, “Occupy Wall Street is a movement that can have serious consequences for the American political and economic landscape and if focused they can help free Americans from the grip of Big Oil. Personally, I do not oppose pipelines but there is a way to stop Big Oil that can make America independent again. I will provide that in my address to the Occupy Minnesota people. As you know, I was called ‘an economic terrorist’ by the former Premier of Manitoba Gary Filmon who is now the Chairman of CSIS. It doesn’t surprise me that a member of the secret service in Canada was caught trying infiltrate the Occupy Wall Street in New York.”

“Trade between Canada and United States has been over $4.5 trillion in the last ten years and the security of energy exports contained in NAFTA is a matter of National Security for both nations. Ninety seven percent of all Canadian oil flows to the United States. Canada sends America two and half times more oil per day than Saudi Arabia does, that is 2.5 million barrels of oil per day. Both CSIS and the CIA know that our Anishinabe people have leverage over the Enbridge pipeline that is routed near our reservations in Manitoba, Minnesota and Wisconsin. Enbridge Depot at Gretna Manitoba by itself pumps over a million barrels of oil per day to the States and we have ability to shut that down if we needed to.”

Chief Nelson said, "Ethical Oil; is a campaign by Ezra Levant in Canada who condemns Saudi Arabia and Arab oil and promotes Canadian oil as ‘conflict free.’ Nothing can be further from the truth. Alberta’s tar sands devastate the environment and while Americans pay the price for each barrel of Canadian oil, Canadian
governments pay nothing to the original owners of the oil.

“Extreme racism is a policy promoting hatred against indigenous people in Canada. It is an orchestrated media campaign by the Canadian Taxpayer Federation, a group that is partially financed by some big oil companies and CTF has continually refused to release their financing to the public.”

“The situation in the United States is critical. Americans are being asked to celebrate the death of Gadhafi and are being told that the leadership in North Korea, Iran, Venezuela, etc are next."

“Occupy Wall Street and Occupy Minnesota are people who are questioning. They are being attacked as ‘old hippies’ lacking any real focus. It is not only a right for average Americans to question but it is more a responsibility as a citizen and human being.“
“When I was in Iraq in 1998, I saw American military policy in action. To question that policy was not a good thing in 1998, I was labeled a ‘dupe’ of Saddam. Even armed with 25 hours of video footage taken in Iraq, evidence of children dying in the hospitals without medicine, the evidence of effect of bombing Iraq with depleted uranium cased bombs causing 4 fold increases in cancer was not cared about. That United Nations found in December 1995 that 567,000 Iraq children had died in the first five years of economic sanctions was not enough to stop the economic sanctions because we told in North America, ‘it is all Saddam's fault.’”

Genocide of First Nations and the media

Chief Nelson said, “If Americans want to see what the price we as indigenous people in Canada pay to have American access to Canadian oil and resources, they need to see the comments on the Winnipeg Free Press and CBC websites. Average Canadians are being told to hate indigenous people and you can see the result of that orchestrated campaign, not just in the deliberate killing of indigenous women but in the deliberate imposition of undeclared economic sanctions against our people. If you view the comments attached to any news article on any First Nation issue, you will see for yourself the hatred being generated against indigenous people. The comments made are beyond Free speech, it is about hatred causing ‘justified’ Genocide in Canada.”
“America is dealing with nine percent unemployment nationally. The Great Depression had a high in 1932 of 25 percent unemployment. In my home community of Roseau River, we have 75 percent unemployment and we are like most First Nation reservations in Canada. Americans are paying. They are not our enemy, they pay for the Canadian exports to the United States, and the problem is that there is no property rights in Canada under the Canadian Charter of Rights and Freedoms. No Casinos like on Native American reservations and reservations that are tiny compared to Native American reservations.

“Reaching out to the American general public is not treason, it is not an act of aggression, it is simply people talking to people. We have to right to question and we have the right to protest injustice.”

First Nations are the real owners of minerals in Canada

Chief Nelson said, “I will not fight my people, I can continue to be Chief at Roseau River but it is better to move on. I want to build not destroy. I built one of the finest Heath centers on an Indian reservation, I built two gaming centers, two Gas Stations, forced through an urban reservation of 74.8 acres on the north west side of Winnipeg, negotiated an 80 million dollar settlement of the 1903 Surrender of 8000 acres of land stolen from my people 108 years ago. I leave my community with over seven million dollars more per year in revenue than they had when I became Chief. I wish them good fortune and I leave to get into business.”

“When I ran for National Chief in 2009, I said, ‘Go to the Americans.’ I said to the Chiefs, We can build a 100 billion dollar foreign investments pool. Now, it is time to prove what I said in 2009. I leave to Germany within two months to begin that process. Foreign nations and businesses who want to do business with indigenous people in Canada must understand, we are the real owners of the 60 different metals and minerals that are mined in Canada. We will find allies amongst Americans who are also tired and want to build fair trade not buy into a system that indebts their children, grandchildren and generations to come.”

NO! to Tarsands! Lakotas welcome Tom Weis and Daryl Hannah

PINE RIDGE, S.D. -- On Wednesday, October 26, 2011, the Oglala Lakota Nation will reinforce their opposition to the proposed Keystone XL Pipeline by welcoming and honoring environmental activist Tom Weis to the Homeland.

Weis, President of Climate Control Solutions, is trekking through six states on a solar-powered “Rocket Trike” to raise awareness of alternative energy solutions available other than the dirty tar sands oil.

Foreign-based Trans Canada Corporation is in negotiations with the U.S. to get approval to funnel the dirty oil through a 36” pipe across America’s heartland, over the expansive Ogallala Aquifer, the water source for the Oglala Lakota Nation and millions of Americans.

Chief Oliver Red Cloud, Traditional and Tribal Leaders and Youth are expected to participate in this rally to Stop The Tar Sands Pipeline.

Reception will be held at Pine Ridge Village C.A.P. Building from 2:00-5:00 (MST). Guest speakers will be on hand to discuss the environmental impact this proposed pipeline will have on our Nation.

Estimated time of Weis’s arrival is 2:00-3:00 p.m.(MST), depending on weather conditions.
On Thursday, October 27, 2011 at approximately 7:00 a.m.(MST) actress and activist Daryl Hannah will arrive to support the Oglala Lakota in their efforts to Stop The Tar Sands Pipeline from entering Treaty Territory. Hannah is expected to participate in a horseback escort for Weis as he makes his way towards the Sicangu Lakota Nation (Rosebud Indian Reservation). Hannah, an ardent opponent of the Keystone XL Pipeline, was recently arrested in front of the White House during an anti-Pipeline rally in Washington, D.C.