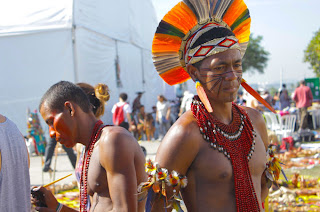 .Rio de Janeiro, Brazil - "The development - the drilling, mining and damming - is affecting everyone, our communities and the Earth, our home and the only planet we have."
The piercing voice of 11-year-old T'Kaiya is enough to grab the attention of delegates passing by. With the aptitude of a seasoned speaker, this young delegate from Canada comfortably commanded the following of environmental activists staging a sit-in at the Rio+20 conference.
T'Kaiya is in Rio to represent the Indigenous Environmental Network and to speak out against the controversial tar sands project being planned by an energy transport company, Enbridge, that involves a pipeline from the Alberta tar sands to the Pacific northwest coast of Canada.
"This pipeline puts in jeopardy, thousands of streams, 45 different indigenous cultures that have been practiced by my ancestors and their ancestors. I am shocked that people would jeopardise such pristine beauty and put a price tag on it," T'Kaiya told Al Jazeera.
READ MORE:
http://www.aljazeera.com/indepth/features/2012/06/2012622175745190650.html?utm_content=tweets&utm_campaign=Trial3&utm_source=SocialFlow&utm_term=twitter&utm_medium=ExperimentMasterAccount

http://www.democracynow.org/2012/6/22/headlines
Protests continue at the Rio+20 U.N. Conference on Sustainable Development in Brazil. On Thursday, civil society delegates staged a walkout of the talks to call for bold action against global warming. Meanwhile, hundreds of indigenous activists marched through the streets of Rio de Janeiro to deliver a petition demanding fairer treatment over land and other rights.