Listen to Kandi Mossett, Mandan, Hidatsa and Arikara, describe how hundreds of Indigenous were halted by the military today, while a small group did deliver the Kari-Oca Declaration to the UN Conference on Sustainability.
Five hundred Indigenous were halted by the military from entering the area where the UN Rio+20 is underway. The Declaration was delivered to the officials of the UN and Brazil.
"We can not commodify the sacred and expect a good outcome," says Mossett, from North Dakota, where oil and gas drilling has devastated her homeland. She is a member of the Indigenous Environmental Network.
Mossett describes how Mother Earth has been assualted in the age of capitalism. The Kari Oca Declaration confirms that Indigenous have the answers to climate change and how to halt the devastation, Mossett said.
As the world leaders seek to profiteer from nature at the summit, Indigenous, barred by the military from attending, are holding their own encampment at the Kari Oca II and produced the Kari-Oca Declaration for the protection of Mother Earth, and the halting of false carbon credit schemes which allow the world's worst polluters to continue polluting.
LISTEN TO KANDI:
Kandi Mosset.CommentsonKariOca declaration

Kari-Oca Declaration and photos from today: http://bsnorrell.blogspot.com/2012/06/indigenous-delivered-kari-oca.html
,﻿﻿
Listen to more at: http://soundcloud.com/globaljusticeecology/ 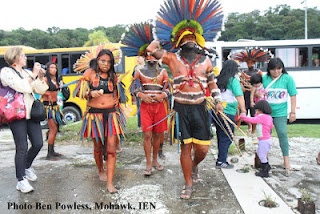