Terry Lee 'Confluence or Treachery on the Navajo Nation?'

Confluence or Treachery on the Navajo Nation?
"In reality what the tribal council and the president need to do is resign, pack up, and leave." 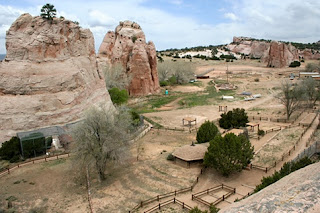 
At this 144 anniversary of the treaty it seems that the people are becoming aware of the truth behind the treaty and resulting subsequent policies (Dawes act, Indian reorganization act, Bennett Freeze, etc).
In the end people like Stanley Pollack and the corporation in Window Rock have all been arranged by the snakes in Washington and corporate USA to get one thing MONEY with your resources (freely taken).  All the while barring the Navajo from using his mind, education, and thinking to use those resources for themselves; is this not oppression?  Is it not oppression to live in towns like Shiprock, Kayenta, and Chinle in homes that are not truly a family’s, without work, without the ability to use land?
Why is it 144 years since the treaty and there is no real Navajo economy? How much red tape has to be cut before a Navajo can operate an independent business on the homeland?  Why can’t a working Navajo man mortgage his land and home to send a child to school?
Why does the single Navajo mom have to drive 100 miles round trip to work at a Wal-Mart with the aim to feed her children; but only work enough for gasoline?  The answers are not complex, there are many but they are kept as a delusion from the people. This is truly oppression.
There may not be physical prison walls, but the walls and men with guns are there if you look hard enough. In truth for years the corporate elite have been using men like Stanely Pollack to whisper into the ears of the tribal leaders and promise a little cash to get their way, many stories have been published by such acts and yet the people tolerate it.
Your coal, your water, your natural gas, your uranium have been used to create vast wealth for many an elite in America. Large industry, beautiful buildings, homes, millions of jobs, and lavish lifestyles has been amassed by the looters of the Navajo resources, using the backs of Navajo labor; where is our cut?
Why are our children still struggling in inhumane schools, why are the youth giving up college prospects, why is there no work on the reservation, why are there starving Dine' on the reservation without running water infrastructure in the richest nation in the world?  Why are the people still existing as a subclass depicted on TV as a destitute people for comedy relief?
True answers of these questions are never given in detail by the dominant culture around the homeland. Instead you hear propaganda, religious excuses, false history lessons, racist remarks, self centered analysis from lawyers and de facto educators who tell us a downplayed lesson of supposed citizenship in this supposed great nation called USA.  A nation that never included the Navajo fully to this day, who yet treat the Navajo as a subclassed burden used today as endangered land squatters to vast subterranean wealth that is already mortgaged.
Isn’t apartheid education one apparent symptom to vast problems? Isn’t the fleecing of our water in SB2109 another? In retrospect it has been nearly a quarter of a decade since the Peter McDonald problem. Yet there is still no water in areas of the reservation. The people who live in those areas without running water who are supporting SB2109 are truly concerned. Is it any wonder?
Why hasn’t 25 years worth of funding been used to create that water infrastructure now? Instead the leaders participate in slush fund financing, purchases of lavishness while sporting tribal SUVs, stays in Scottsdale, trips to Washington galas, visits to bars, and now operating casinos yet the peoples’ infrastructure yet remains desolate with the excuse that there is no money.
But the leaders continue to emulate a politico/economic culture that is not Navajo. It’s been 25 years Mr. Shelly and your government and its aristocratic thinking predecessors and friends have done NOTHING, absolutely NOTHING for the people.

If our people had true sovereignty as Mr. Shelly and Pollack says we can trash SB2109 and other documents that have historically told the Navajo how to live and what they think.  We can trash the old treaties establish our cultural laws, and mobilize our equipment today, hire our own people to build the infrastructures needed today.  Our nation can shut down the looting corporations today, and operate those resources and trade them at the market prices right now.  But instead our leaders are only participating in policy solicitation and mediation for an obese American hand that has trained the Navajo mind to yearn for commoditized notions.

In reality what the tribal council and the president need to do is resign, pack up, and leave.  Live in Albuquerque or Scottsdale where treachery and indoctrination can thrive for you where selfishness can be exercised unhinged.

Stanley Pollack is not a Navajo nor will he ever be one, what is he here for? He is only here for the Anglo Saxon mindset of get rich quick.  Men like him leave their Window Rock offices protected by publicly funded privatized security and drive over Navajo children and spit on the Navajo jobless men on their way.  Mr. Pollack take off the turquoise, take your flag, and leave; go back to Washington D.C. and tell your president and corporate dictators that you have been a liar and a criminal of two governments for decades.

Our people will make due in a struggle that is not new.  People ask all the time where are the real Dine' leaders, the visionaries, the intellectuals, the educated, the workers, the brave, the warriors of the people, and the heroes of the people where did they go? Maybe they have been kept away on purpose? Come home, be here, talk with your people, use the language, and participate with the will of the people despite opposition and hate.

The work is here in the homeland.


In the case for SB2109, it is an insult and a savage slap in the face by a fat hand in Capitalist America to only settle water rights for a lump sum of three hundred or so millions of dollars. A supposed settlement? The biligannas seriously have a problem if they still think we are still stupid. When you give a capitalist a commodity for a price, they will come back wanting it cheaper, wanting more. If you don’t give it, they come back with threats and competition. Then later they will come back with policy and guns. This is the nature of those people.
Think how much money will corporate America make on the same water amount? It is not unreasonable to say twelve times the worth of the settlement in just a year? With the water they want to steal they will power their economy, provide electricity elsewhere, sell it three times over and try to resell it back to us at inflated prices, finance it with bonds, variable interest, and stocks, provide jobs for their people, provide great education for their kids, create their infrastructure, and buy some more of our people.
Today we the Dine people need this water. Americans forget themselves; they need to know now that the Dine' Nation belongs to the Dine'.  We will need Navajo water and other Navajo resources to feed our people, feed our livestock, house our families, create our government, create our nation, and create our economy for our children yet to be.

People don’t sell that out. The biligannas can buy water from Lake Havasu or move elsewhere. We are Americans second; Dine' first and our rights, our claims, our concerns in our language and being for our people in our own land should come first.
Posted by Censored News, publisher Brenda Norrell at June 20, 2012