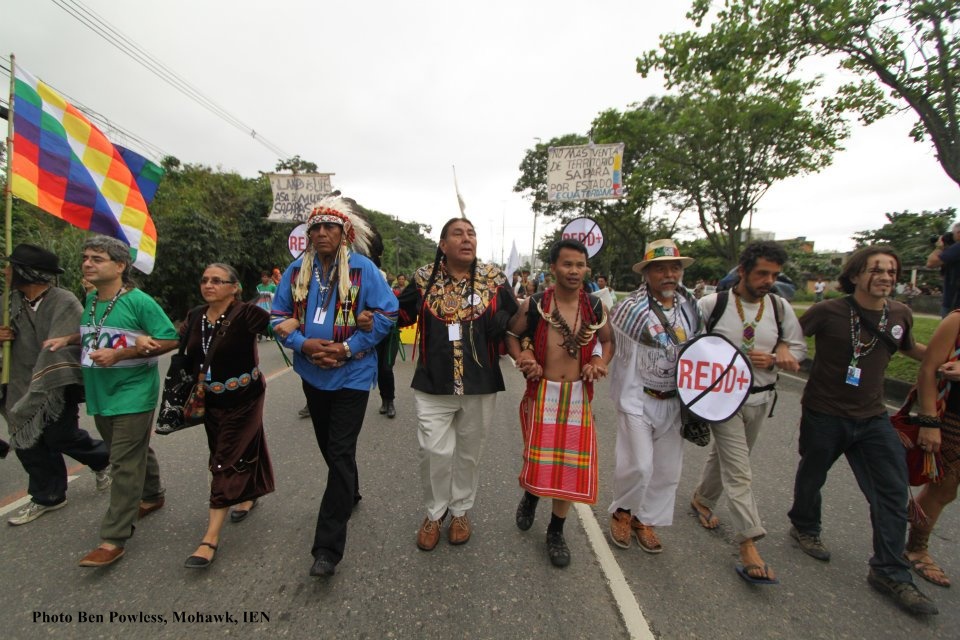 RIO DE JANEIRO -- Indigenous Peoples delivered the Kari-Oca II Declaration for the protection of Mother Earth to leaders at Rio+20, the UN Conference on Sustainability, after the military halted hundreds of Indigenous Peoples from entering the area.
﻿﻿The Indigenous delegation delivering the Declaration today included members of the Indigenous Environmental Network and Lakota Chief Arvol Looking Horse, 19th generation Keeper of the Sacred White Buffalo Calf Pipe.
The Kari-Oca II Declaration was presented to Director of the Division for Sustainable Development Nikhil Seth, and Gilberto Carvalho, the Chief Minister to the Presidency of Brazil.
As world leaders seek to profiteer from nature at the summit, Indigenous Peoples, barred by the military from attending, are holding their own encampment at the Kari Oca II and produced the Kari-Oca II Declaration for the protection of Mother Earth. Indigenous are demanding a halt to the false carbon market schemes which allow the world's worst polluters to continue polluting and profiteering from nature. 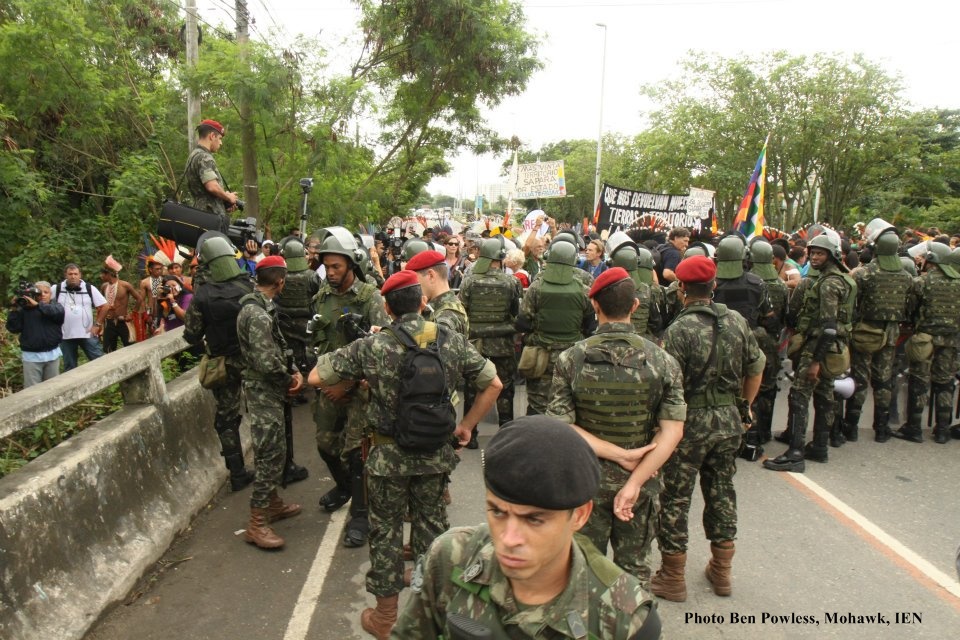 Kandi Mossett, Mandan, Hidatsa and Arikara from North Dakota, was in the delegation of the Indigenous Environmental Network. Mossett said only a small group of Indigenous were allowed past the military to deliver the Declaration.
﻿﻿Mossett said 500 Indigenous were halted by the military from entering the area. "We can not commodify the sacred and expect a good outcome," said Mossett, whose homeland in North Dakota has been devastated by oil and gas drilling. Mossett said during this age of capitalism, Mother Earth has been assaulted. She said the Kari Oca Declaration confirms that Indigenous have the answers to climate change and how to halt the devastation.
﻿﻿The Declaration of Kari-Oca II states, “We, Indigenous Peoples from all regions of the world have defended our Mother Earth from the aggression of unsustainable development and the over exploitation of our natural resources by mining, logging, mega-dams, exploration and extraction of petroleum. Our forests suffer from the production of agro-fuels, bio-mass, plantations and other impositions of false solutions to climate change and unsustainable, damaging development.”
﻿ “The Green Economy is nothing more than capitalism of nature; a perverse attempt by corporations, extractive industries and governments to cash in on Creation by privatizing, commodifying, and selling off the Sacred and all forms of life and the sky, including the air we breathe, the water we drink and all the genes, plants, traditional seeds, trees, animals, fish, biological and cultural diversity, ecosystems and traditional knowledge that make life on Earth possible and enjoyable.”
Listen to Kandi Mossett describe today’s events. Interview by Jeff Conant of the Global Justice Ecology Project. http://bsnorrell.blogspot.com/2012/06/listen-indigenous-deliver-kari-oca.html
Also see today’s action: Canadian youths Occupy UN summit:
http://bsnorrell.blogspot.com/2012/06/canadian-youths-occupy-rio20-brazil.html
Author Brenda Norrell brendanorrell@gmail.com
More photos from today at http://www.bsnorrell.blogspot.com 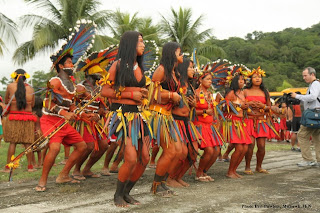 .
The Future We Want
In the absence of a true implementation of sustainable development, the world is now in a multiple ecological, economic and climatic crisis; including biodiversity loss, desertification, deglaciation, food, water, energy shortage, a worsening global economic recession, social instability and crisis of values. In this sense, we recognize that much remains to be done by international agreements to respond adequately to the rights and needs of Indigenous Peoples. The actual contributions and potentials of our peoples must be recognized by a true sustainable development for our communities that allows each one of us to Live Well.
As peoples, we reaffirm our rights to self-determination and to own, control and manage our traditional lands and territories, waters and other resources. Our lands and territories are at the core of our existence – we are the land and the land is us; we have a distinct spiritual and material relationship with our lands and territories and they are inextricably linked to our survival and to the preservation and further development of our knowledge systems and cultures, conservation and sustainable use of biodiversity and ecosystem management.
We will exercise the right to determine and establish priorities and strategies for our self-development and for the use of our lands, territories and other resources. We demand that free, prior and informed consent must be the determinant and legally binding principle of approving or rejecting any plan, project or activity affecting our lands, territories and other resources. Without the right of Free Prior and Informed Consent, the colonialist model of the domination of the Earth and its resources will continue with the same impunity.
We will continue to unite as Indigenous Peoples and build a strong solidarity and partnership among ourselves, local communities and non-indigenous genuine advocates of our issues. This solidarity will advance the global campaign for Indigenous Peoples rights to land, life and resources and in the achievement of our self-determination and liberation. We will continue to challenge and resist colonialist and capitalist development models that promote the domination of nature, incessant economic growth, limitless profit-seeking resource extraction, unsustainable consumption and production and the unregulated commodities and financial markets. Humans are an integral part of the natural world and all human rights, including Indigenous Peoples’ rights, which must be respected and observed by development.
We invite all of civil society to protect and promote our rights and worldviews and respect natural law, our spiritualities and cultures and our values of reciprocity, harmony with nature, solidarity, and collectivity. Caring and sharing, among other values, are crucial in bringing about a more just, equitable and sustainable world. In this context, we call for the inclusion of cultureas the fourth pillar of sustainable development.
The legal recognition and protection of the rights of Indigenous Peoples to land, territories, resources and traditional knowledge should be a prerequisite for development and planning for any and all types of adaptation and mitigation to climate change, environmental conservation (including the creation of “protected areas”), the sustainable use of biodiversity and measures to combat desertification. In all instances there must be free, prior and informed consent of Indigenous Peoples.
We continue to pursue the commitments made at Earth Summit as reflected in this political declaration. We call on the UN to begin their implementation, and to ensure the full, formal and effective participation of Indigenous Peoples in all processes and activities of the Rio+20 Conference and beyond, in accordance with the United Nations Declaration on the rights of Indigenous Peoples (UNDRIP) and the principle of Free, Prior and Informed Consent (FPIC).
We continue to inhabit and maintain the last remaining sustainable ecosystems and biodiversity hotspots in the world. We can contribute substantially to sustainable development but we believe that a holistic ecosystem framework for sustainable development should be promoted. This includes the integration of the human-rights based approach, ecosystem approach and culturally sensitive and knowledge-based approaches.
We declare our solidarity and support for the demands and aspirations of the Indigenous Peoples of Brazil found in the Annex to this Declaration.
We Walk in the Footsteps of our Ancestors.
Accepted by Acclamation, Kari-Oka Village, at Sacred Kari-Oka Púku, Rio de Janeiro, Brazil, 17 June 2012.
Click here to Download the KARI-OCA 2 DECLARATION (PDF-ENG)
Haga clic aquí para descargar el STATEMENT OF KARI-OCA 2 “WORLD CONFERENCE ON THE INDIGENOUS PEOPLES OF RIO 20 AND MOTHER EARTH” (PDF-ESP)
Clique aqui para fazer o Download da KARI-OCA 2 DECLARAÇÃO “POVOS INDÍGENAS CONFERÊNCIA GLOBAL SOBRE RIO+20 E MÃE TERRA” (PDF-PORTUGUESE)
Posted by Censored News, publisher Brenda Norrell at June 21, 2012