Indigenous say 'NO!' to the False Green Economy at Rio 20 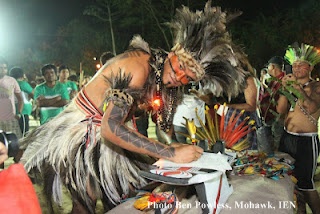 The global 1% is converging in Rio de Janeiro, Brazil this June at the Rio+20 United Nations Conference on Sustainable Development to unveil their “Green Economy” strategy—but we know that just calling something “green” doesn’t mean it’s good for people or for the planet. The "Rio+20" Conference is a key moment when world government have an opportunity to either act to protect our future, or continue on the same failed strategies that are threatening our future.
The 99% are also mobilizing to Brazil this June. Grassroots Global Justice and other grassroots groups in the Climate Justice Alignment will join thousands of people from social movements around the world converging in Rio to demand an end to profit-driven dirty energy industries like oil drilling and pipelines, market-based strategies like carbon-trading and forest exploitation, and extreme energy like fossil fuels and incinerators.

﻿﻿ When you sign, an email will be sent directly to US Rio+20 Lead Negotiator John Matuszak, and to the US State Department's Office of Correspondence and Records who tracks and documents comments for US Secretary of State Hillary Clinton:To US Secretary of State Hillary Clinton and US Rio+20 Lead Negotiator John Matuszak,
At the Rio+20 United Nations Conference on Sustainable Development, I urge you to reject the false solutions of the "Green Economy" and instead invest in solutions to the root causes of the ecological and economic crises that put our communities to work, cool the planet, and transition environmental control back to local economies.
In particular, I urge you to:
http://ggjalliance.org/RioPetition2012

Also see:
The Guardian: Environmental activists being killed every week:
http://www.guardian.co.uk/environment/2012/jun/19/environment-activist-deaths
at June 19, 2012