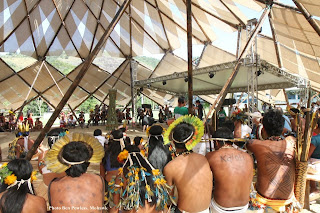 RIO DE JANEIRO – Indigenous Peoples of the world participating in Rio+20 denounce that the Green Economy and REDD+ privatize nature, sell the air we breathe and destroy the future.
Indigenous Peoples´ powerful message to the United Nations summit is eloquently conveyed in the No REDD+! in Rio+20 Declaration launched this morning by of the Global Alliance of Indigenous Peoples and Local Communities on Climate Change against REDD and for Life. The Alliance warns that REDD+ constitutes a worldwide land grab and gigantesque carbon offset scam.
REDD+ is an UN-promoted false solution to climate change and the pillar of the Green Economy. Officially, REDD+ stands for Reducing Emissions from Deforestation and forest Degradation. However, Tom Goldtooth (Dakota/Dine´), Director of Indigenous Environmental Network, insists that “REDD+ really means Reaping profits from Evictions, land grabs, Deforestation and Destruction of biodiversity.”
Just as Chief Seattle over a hundred years ago asked, “How can you sell the air?,” Marlon Santi of the Ecuadorian Amazon, condemns carbon trading and REDD+ and asks “How can you sell Mother Earth And Father Sky?” But apparently someone is trying, as the recently inaugurated Bolsa Verde do Rio de Janeiro (BVRio), a Brazilian stockmarket for forest carbon credits, shows.
“Not only does REDD+ corrupt the Sacred and fuel financial speculation, it also serves as greenwash for extractive industries like Shell and Rio Tinto,” according to Berenice Sanchez of the Nahua People of Mexico.
The Alliance argues that REDD+ is a “new wave of colonialism.” From Peru to Papua New Guinea, carbon cowboys are running amok trying to rip off native communities and grab the forests of the world, 80% of which are found in Indigenous Peoples´ lands and territories.
“The REDD+ race to take over our land is on. Without our land, we are nothing. The Green Economy and REDD+ could make money with genocide,” alerts Mr. Santi.
“The environmental crisis is getting worse because of capitalists´ false solutions such as REDD+. The real solution to the climate crisis affecting the people of the world, especially Indigenous Peoples, is to protect Mother Earth, uphold social justice and respect the Indigenous Peoples’ decisions and right to say no,” said Marife Macalanda of the Asia Pacific Indigenous Youth Network.
Rio+20 Alternative Peoples’ Summit Opens Today

People of the World vs. The Green Economy Goliath and the Global Foreclosure

Today is the opening day of the Cupola dos Povos–the alternative Peoples’ Summit for Environmental and Social Justice in Rio de Janeiro, Brazil.
It was pulled together by Brazilian groups and is being attended by social movements, Indigenous Peoples, activists and organizations from all over the world who are coming together to identify real solutions to the multiple and rising crises we face as humans on planet Earth. The summit was organized in direct opposition to the official UN circus known as the Rio+20 Conference for Sustainable Development. More aptly it would be called the Rio+20 Conference for the greenwashing of Business as Usual.
As I flew to Rio on 12 June, I read an article in the Financial Times titled “Showdown Looms at OPEC After Saudi Arabia Urges Higher Output.” The article explained how Saudi Arabia is urging OPEC to increase their output of oil in order to ensure that the global price of oil does not exceed US$100/barrel in order to “mitigate the risks that high oil prices pose to the global economy.”
The insane logic of expanding oil production in the face of mounting climate chaos in order to help rescue the global economy accurately reflects the mindset behind the negotiations around the UN’s Rio+20 Earth Summit, set to start next week here in Rio.
At the Rio+20 summit, industrialized countries and their corporate puppet masters, accompanied by insidious institutions like the IMF and World Bank, are leading the push for development of a so-called “Green Economy.” The sinister and oxymoronic concept is to use the very ecological devastation caused by the global economy to create new markets in environmental services, in order to help prop up the global economy and enable business as usual and the ongoing destruction of ecosystems and communities–all under a green facade.
Those promoting the so-called Green Economy seek to stimulate new trade and investment by creating markets in “ecosystem services.” These services are provided by intact natural ecosystems, and include such things as the storage of carbon, the purification of air and water, and the maintenance of biodiversity. The illogical and absurd theory is that by putting these services in the capitalist market, and giving them a monetary value, we can protect them.
The obvious fallout of this (and the hope of investors) is that if these “environmental services” are given an economic value, then as the ecosystems that provide them become more scarce, demand for them will increase and their price will go up. And since the capitalist economy is based on transformation of natural resources into capital (i.e. turning forests into paper), the increasing scarcity is assured. And necessarily, this scheme will work best when the ecosystems providing these services are privately owned.
In this way, the Green Economy sets the groundwork for massive privatization of the last intact ecosystems on the planet–forests, wetlands, grasslands, etc, thereby disenfranchising the very communities that rely on and have traditionally protected these lands. Like the foreclosure crisis caused by speculative and predatory investments in housing markets, this Green Economy will result in a Global Foreclosure–a mass displacement of communities and Peoples–the victims of the privatization and speculative trade in nature.
We see this twisted scenario playing out already in the areas of so-called “bioenergy” and REDD (the Reducing Emissions from Deforestation and Forest Degradation scheme of the UN and World Bank). The skyrocketing demand for bioenergy (liquid biofuels derived from plant material or electricity produced by burning trees) is already causing a global foreclosure–unprecedented landgrabs that are displacing entire communities of Indigenous or other rural peoples because their land is needed to grow feedstocks for energy.
But so-called “civil society” is striking back. The steady erosion of the ability of non-corporate entities to participate in UN processes has led to mass protests at the UN Conventions on Climate Change and Biological Diversity, which in turn has led to the total militarization of these events as the UN begins to look more and more like the WTO (World Trade Organization).
The alternative Peoples’ Assembly kicks off today, and one of the first events is a press conference by the Indigenous Environmental Network and a global alliance of indigenous groups who have united to oppose REDD.
Global Justice Ecology Project (GJEP) will be reporting from both the inside and outside events here in Rio, exposing the nefarious intentions of the corporados and the struggles by people to stop the false solutions while searching for real, just and truly ecological solutions. There will be marches, protests, workshops and assemblies starting today through the 23rd of June. GJEP will be there.
----------------------------------------------------------------------------------------------------------------------