Indigenous in Rio: 'No!' to Carbon Cowboys

Indigenous in Rio: ‘NO!’ to False Green Economy and Carbon Cowboys

Indigenous Peoples are gathered at the Kari-Oca II Earth Summit in Rio de Janeiro, as the governments and corporate profiteers attempt to place a price on nature as a commodity at the United Nations Conference on Sustainability Rio+20.
Indigenous Peoples will march to the United Nations Rio+20 Summit Thursday, June 21, 2012, to deliver the Kari-Oca II Declaration to the Rio+20 Secretary-General, Sha Zukang. It will be at the Rio Center, Flagpole area between Pavilion 3 and 5, at 11:30 am.
Ratified by over five hundred Indigenous Peoples from Brazil and throughout the world, the Kari-Oca II declaration demands respect for Indigenous Peoples’ rights and the dignity of Mother Earth and condemns the Green Economy as the privatization of Life.
“We see the goals of UNCSD Rio+20, the 'Green Economy,' and its premise that the world can only ‘save’ nature by commodifying its life-giving and life-sustaining capacities as a continuation of the colonialism that Indigenous Peoples and our Mother Earth have faced and resisted for 520 years”, the declaration states.
Calling it a new wave of colonialism, Indigenous Peoples from around the world are fighting to protect their rivers and forests, their air and land from green scams and false climate solutions. They are also remembering the Indigenous environmental activists from around the world who have been murdered protecting their homelands from mining and drilling. 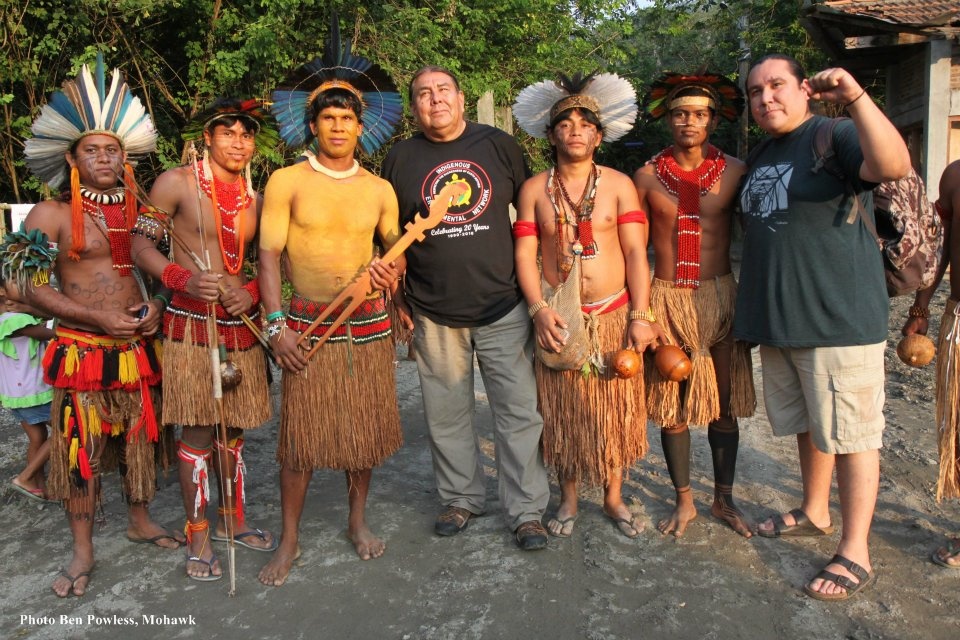 Indigenous Peoples from the United States and Canada are focused on halting the environmental nightmare of Alberta’s dirty tarsands, which has already destroyed Cree homelands in Canada, and the Keystone pipelines, which could pollute even more waterways and lands in the US.
The Indigenous Environmental Network is battling “carbon cowboys,” and exposing the false climate solutions and scam carbon credits of the carbon market, which allows the world’s worst polluters to continue polluting.
Photo IEN's Tom Goldtooth, Dakota Dine', and Clayton Thomas Muller, Cree, at Kari-Oca II in Rio. Photo Ben Powless, Mohawk.
Dirty coal more desperate on Navajo Nation
The worst polluters in the United States include the coal fired power plants on the Navajo Nation, the latest target in a public relations scheme using the carbon credit scam, with so-called green credits, as part of the coal industry's desperate scheme to keep the Navajo Generating Station operating and polluting near the Grand Canyon.
Operated by the Salt River Project in Arizona, the Navajo Generating Station is one of the dirtiest coal fired power plants in the United States, and one of three coal fired power plants on the Navajo Nation. The Navajo Nation is also targeted by water rights theft schemes of Arizona senators and polluted by widespread oil and gas drilling and radioactive tailings from Cold War uranium mines. The Navajo Nation in New Mexico, and Lakota homelands in Nebraska and South Dakota, are both now targeted with new uranium mining that could further contaminate aquifers.
Rights of Nature
At the gatherings underway in Rio, Indigenous Peoples who gathered in Cochabamba, Bolivia, in 2010, are carrying forward the Rights of Nature, mandated by the World’s Peoples Conference on Climate Change and the Rights of Mother Earth.
The Declaration of the Rights of Nature states: “The so-called ‘developed; countries must reduce their levels of over-consumption and overexploitation of resources of the world in order to reestablish harmony among human beings and with nature, allowing for the sustainable development of all developing countries." It also demands a world climate court, redistribution of wealth, and the halt to carbon credits and false climate solutions.
Carbon cowbows, the REDD hoax
Meanwhile, at the Kari-Oca II in Rio, Indigenous demand a halt to the corporate destruction of their forests and rivers, land and air.
Indigenous Peoples denounced the Green Economy and REDD privatization of nature, which is aimed at selling the air and destroying the future.
Indigenous Peoples warn of the REDD scam, which constitutes a worldwide land grab and gigantesque carbon offset scam.
REDD+ is an UN-promoted false solution to climate change and the pillar of the Green Economy. Officially, REDD+ stands for Reducing Emissions from Deforestation and forest Degradation.
Tom Goldtooth (Dakota/Dine´), Director of Indigenous Environmental Network, said that “REDD+ really means Reaping profits from Evictions, land grabs, Deforestation and Destruction of biodiversity.”
Just as Chief Seattle over a hundred years ago asked, “How can you sell the air?,” Marlon Santi of the Ecuadorian Amazon, condemns carbon trading and REDD+ and asks, “How can you sell Mother Earth and Father Sky?”
But apparently someone is trying, as the recently inaugurated Bolsa Verde do Rio de Janeiro (BVRio), a Brazilian stockmarket for forest carbon credits, shows.
Berenice Sanchez of the Nahua People of Mexico said, “Not only does REDD+ corrupt the Sacred and fuel financial speculation, it also serves as greenwash for extractive industries like Shell and Rio Tinto."
Indigenous Peoples said that REDD+ is a “new wave of colonialism.”
From Peru to Papua New Guinea, carbon cowboys are running amok trying to rip off native communities and grab the forests of the world, 80 percent of which are found in Indigenous Peoples´ lands and territories.
Marife Macalanda of the Asia Pacific Indigenous Youth Network said, “The environmental crisis is getting worse because of capitalists´ false solutions such as REDD+. The real solution to the climate crisis affecting the people of the world, especially Indigenous Peoples, is to protect Mother Earth, uphold social justice and respect the Indigenous Peoples’ decisions and right to say no.”
P 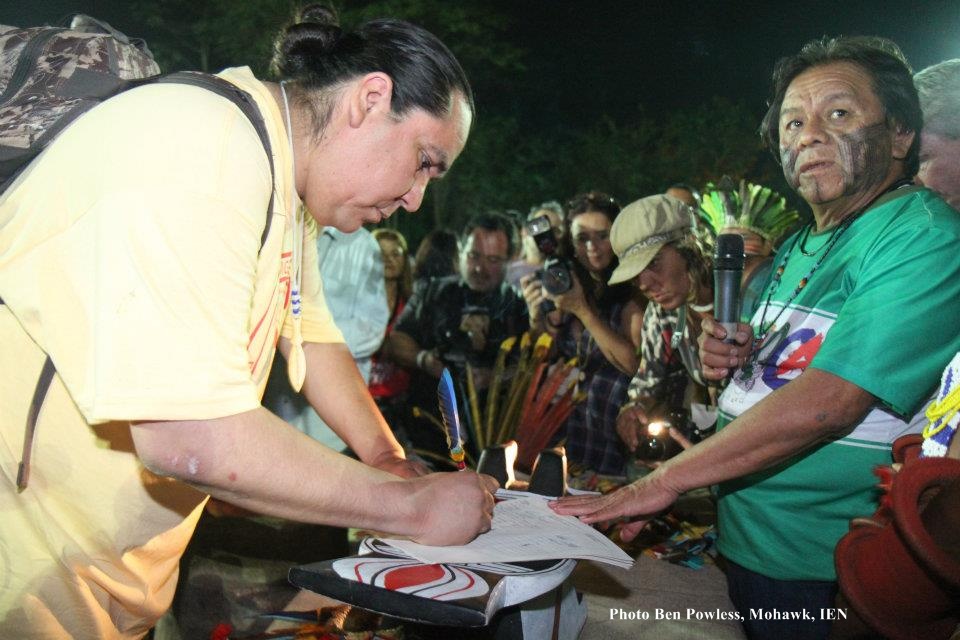 etition to US Hillary Clinton
The Grassroots Global Justice Alliance said, “The global 1% is converging in Rio de Janeiro, Brazil this June at the Rio+20 United Nations Conference on Sustainable Development to unveil their “Green Economy” strategy—but we know that just calling something 'green' doesn’t mean it’s good for people or for the planet. The Rio+20 Conference is a key moment when world government have an opportunity to either act to protect our future, or continue on the same failed strategies that are threatening our future.”
Photo: Clayton Thomas Muller, Cree, signs Declaration at Kari-Oca II. Photo Ben Powless.
“The 99% are also mobilizing to Brazil this June. Grassroots Global Justice and other grassroots groups in the Climate Justice Alignment will join thousands of people from social movements around the world converging in Rio to demand an end to profit-driven dirty energy industries like oil drilling and pipelines, market-based strategies like carbon-trading and forest exploitation, and extreme energy like fossil fuels and incinerators.”
The alliance is gathering signatures to be sent to US Rio+20 Lead Negotiator John Matuszak, and to the US State Department's Office of Correspondence and Records who tracks and documents comments for US Secretary of State Hillary Clinton:
To US Secretary of State Hillary Clinton and US Rio+20 Lead Negotiator John Matuszak,
At the Rio+20 United Nations Conference on Sustainable Development, I urge you to reject the false solutions of the "Green Economy" and instead invest in solutions to the root causes of the ecological and economic crises that put our communities to work, cool the planet, and transition environmental control back to local economies.
In particular, I urge you to: Stop destructive climate projects and unsustainable energy developments including the Canadian Tar Sands, the proposed TransCanada Keystone XL pipeline, and proposed oil drilling in the off-shore Outer Continental Shelf areas of the Beaufort and Chukchi Seas of Alaska.
Reject REDD+ (Reducing Emissions from Deforestation and Forest Degradation) and other carbon offset models as the pillar of the Green Economy that furthers the privatization of Nature and displaces indigenous communities.
End the Era of Extreme Energy: Create just transition pathways out of resource and carbon-intensive industries such as fossil fuels, waste incineration, biomass energy, nuclear power, and industrial agriculture. 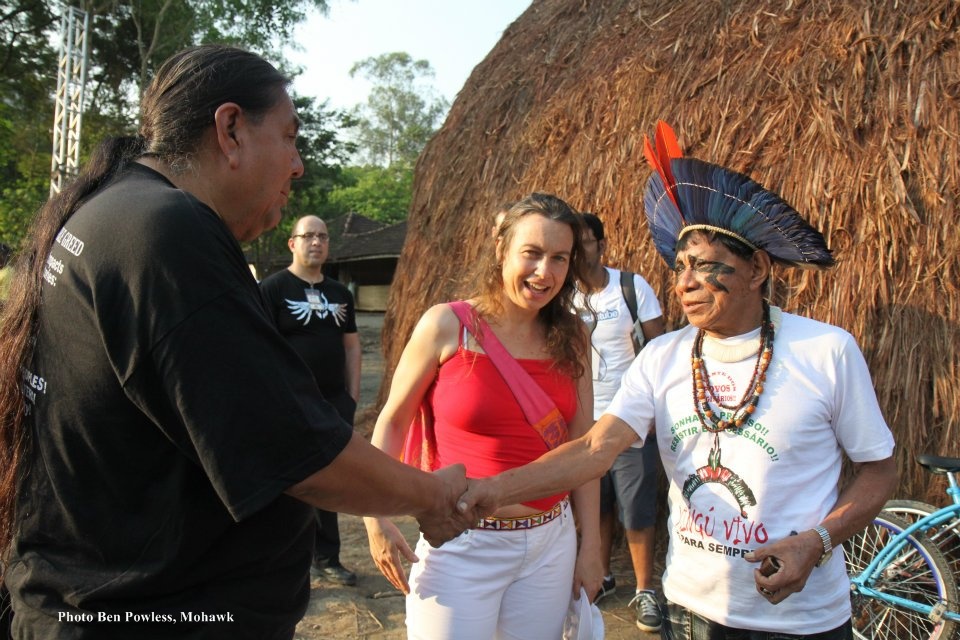