Today's Censored News: From Texas blockade to the Arizona border


OCT. 1, 2012
The top story today is the Texas lockdown and the tree sitters attempting to halt the TransCanada Keystone pipeline that is now seizing family farms near Houston.
This is the same southern Keystone pipeline for carrying dirty tarsands oil from Alberta, Canada, that President Obama came to Oklahoma to promote.
It is Day 8 for the tree sitters, who have survived rainy weather and threats by sheriffs, while blockaders held off bulldozers in Winnsboro, Texas. http://tarsandsblockade.org/


In South Dakota, the Owe Aku International Justice Project held a Protecting Sacred Water Teach In, as Lakotas struggle to protect their water from uranium mining and the threat of the Keystone XL pipeline which could poison the massive Ogallala Aquifer. Lakotas Debra White Plume and Richard Iron Cloud were among those who spoke at the teach in, watch videos at www.bsnorrell.blogspot.com


The corporate apartheid at the Arizona border and in Palestine is now more apparent, as the New Statesman reveals how the security company G4S is responsible for aiding Israel to illegally imprison Palestinians in violation of the Geneva Conventions.

http://www.newstatesman.com/blogs/politics/2012/09/how-g4s-helps-israel-break-geneva-convention
G4S also has the contract to transport detained migrants at the Arizona border. Earlier Wackenhut, in an apparent effort to profiteer from misery, split into two companies, GEO private prisons and Wackenhut Transportation, which is owned by G4S and has the Arizona contract.
The Israeli defense contractor Elbit Systems was also contracted by Boeing on the Arizona border for security systems in the billion dollar boondoggle involving spy towers and the border wall. Israel's Elbit also supplied drones earlier for the US/Mexico border to Homeland Security.


Meanwhile on Tohono O’odham land, the US Border Patrol plans a massive complex to house 32 agents, horses, dogs and helicopters. The plan was kept secret from the O’odham people until the draft Environmental Impact Statement was issued in Sept. O’odham say that their tribal government has been co-opted by the US government and will not protect them from the abuse of Border Patrol agents. This comes as the US is installing new spy towers on Tohono O'odham land, with another US spy tower now at 'The Gate' on Tohono O'odham land in southern Arizona.


Hundreds of Border Patrol agents have already been arrested for conspiracy and drug running, according to testimony before Congress. Other Border Patrol agents have been charged with assaults, rapes and murders in the deaths of migrants. This comes as the ATF’s Project Gunrunner has been supplying assault weapons to the cartels, since it began in 2005 in Laredo, Texas, according to a Department of Justice report. Project Gunrunner then expanded to the Arizona border. Earlier, US soldiers, high school military recruiters in Tucson, police and prison guards in southern Arizona  were so anxious to smuggle cocaine from Nogales, to Phoenix, that Operation Green Light was halted after nearly 100 arrests. 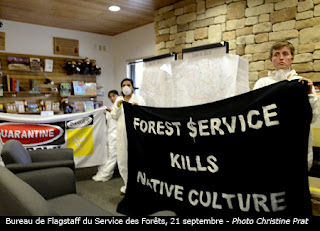 The struggle to protect San Francisco Peaks continues. French writer and photographer Christine Prat shares her work from her September stay in Arizona. Navajos, Havasupai, Hualapai and Hopi are among 13 area Native American Nations struggling to prevent the Arizona Snowbowl from using sewage water to make snow for tourist on the sacred mountain. Native medicine men perform ceremonies, and gather healing herbs, on the Peaks. Already the pipeline path has destroyed old growth pines.
(French language)
http://www.chrisp.lautre.net/wpblog/
First Nation Delegation to Iran
In other news, First Nation Terrance Nelson alleges vote buying in Canada, as a First Nation delegation prepares to leave for Iran in October. Canada closed its Iranian Embassy shortly after Nelson made the announcement of the Native delegation, which said it will share photos of the Massacre of Wounded Knee. Nelson said the delegation will also ask for their lives to be spared of three Canadians imprisoned in Iran. More at www.bsnorrell.blogspot.com
at October 01, 2012 No comments:


Richard Iron Cloud, Lakota, remembers Hopi Thomas Banyacya and shares Hopi instructions regarding the gift of the earth and the stewardship of the earth, and more.
Published on Sep 26, 2012 by NativeImpact
Richard Iron Cloud, Takoja of Bad Wound leader of the True Oglala's aka Tasnaheca Utapi Ground Squirl Eaters. Also Grandson of Knife Chief leader of the Wajaje Band, Grandson of Chief Iron Cloud who fought in the battle of the Greasy Grass. Grandson of American Horse on his mothers side. and Thunder Buffalo Bull who was the son of Chief Bull Bear. Also Grandson of Joseph Bissonette interpreter of the 1868 Treaty at Fort Laramie.
at October 01, 2012 No comments:

Owe Aku - "Bring Back the Way" is hosting a series of "Sacred Water Protection Teach Ins" across Lakota Territory in South Dakota, the first was held at the renowned Billy Mills Hall in Pine Ridge Village on The Oglala Lakota Nation September 26, 2012.

The precious drinking water supply of the Oglala Lakota people will be overlapped more than a few times if TransCanada gets its way and the US State Department approves its second attempt to get a permit to build the Keystone XL Pipeline. The pipeline will enter this big land in Montana, come south and skirt the Cheyenne River Sioux Tribe, Pine Ridge/Oglala Lakota Nation, Lower Brule Sioux Tribe, to trespass historical held jurisdictions of the Rosebud Sioux Tribe/Sicangu Nation before it enters the north western sand hills region of the State of Nebraska after leaving South Dakota.

Recently, TransCanada revealed its "new" route through the sand hills of Nebraska, keeping their budget in mind, they diverted a total of 20 miles. There is sand hills land on the Pine Ridge in the LaCreek District. The KXL pipeline will be buried into the Ogallala Aquifer, in numerous places when one digs a few feet down, water rises.
﻿
The Lakota Nation, South Dakota's Ag community and citizens all over South Dakota, depend on the Rural Water Pipeline, or Lyman Jones as it is called off-reservation. It crosses the Lyman Jones in 43 places. It crosses our water pipeline to the Pine Ridge Indian Reservation at least twice.

﻿﻿﻿﻿The KXL will carry toxic, crude tar sands oil bitumen from the State of Florida sized tar sand mines near the Ft McMurray area of Alberta, Canada. Much of the pristine Boreas Forest has been totally decimated, strip mined to bare dirt, to get at the tar sands oil deep in Mother Earth. The oil miners use 3 to 4 barrels of drinking water to produce one barrel of oil, and stores billions of gallons of waste water in huge waste water ponds. It is a secret what chemicals they use to dilute the heavy crude! However, a Vietnam Veteran attending previous meetings knew that some of the chemicals are the same as what was used in Agent Orange as revealed in meetings with the United States State Department. The teach-ins offer guest speakers, informative handouts to share, FACTS on the tar sands oil mine, the KXL oil pipeline, safety records of the pipeline industry and information of historical and cultural Lakota land sites that TransCanada plans to cross. Tribal Nation officials will speak on these significant land sites, several allied organizations will also speak about drinking water and Mother Earth protection and will have sideshows to share images from the tar sands oil mine and other water destruction mining and mining-related activities.

Information provided on Tribal Government plans to protect their Homelands, and we want to generate community discussion on how we can all work together to protect our sacred water, Mother Earth, and coming generations for all South Dakotans and all generations who want clean, non-toxic drinking water today and into the future.

www.bringbacktheway.com or contact Native.Impact@gmail.com
for more information and scheduling location and times
at October 01, 2012 No comments: