On losing a compass, Russell Means 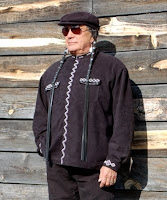 Russell Means perceptions and wit were a compass, and his words were rich fuel

Looking back through Russell Means statements, I've found a favorite. Means describes the dogs, ponies and smokescreen of the US 'Listening Conferences' on human rights, which terminated in the usual, watered-down babble of the US to the UN. (Read here.)

Reading back through the e-mails, I was happy to see that when Bolivian President Evo Morales took the lead in global climate talks, the defense of Mother Earth, and the Rights of Nature, Russell said, "This is what the tribal councils should be doing."

Unfortunately, this week, the elected leaders at National Congress of American Indians are doing the exact opposite in Sacramento, Calif, as they push for more drilling, mining and destruction of the natural world, and the promotion of US colonization and US militarization, according to their agenda www.ncai.org

During 30 years of interviewing Russell, he became a friend. It is a sad loss to all of us who knew him, and to the global community who depended on his compass, his profound perceptions, and his courage to say what others were too fearful to say.

In closing, here are words of Russell Means, speaking on some of the most censored issues in Indian country.

While I was a staff reporter for Indian Country Today, after its purchase in the late 1990s, the censored issues included the American Indian Movement, Russell Means, and uranium mining on Pine Ridge. This censorship led to the publication of the current Censored News.

Means said, "In 1975, with his control of the Pine Ridge Reservation in South Dakota secured by force, Tribal President Wilson set about ceding uranium-rich areas of the sacred Black Hills to the federal government. AIM assisted in protecting Pine Ridge’s traditional families from the constant
onslaught of violence, which culminated in the AIM occupation and government siege of Wounded Knee in the Spring of 1973."
"From 1973 to 1976, the people of Pine Ridge lived under the 'Reign of Terror'—more than 76 Natives, mainly traditional Lakotah and AIM members, were murdered, primarily by Wilson’s goons, a term coined by the elderly women who protested against them. Later, in a perverse play on words, the goons called themselves, 'Guardians of the Oglala Nation' (GOONs)."

Read more at Censored News www.bsnorrell.blogspot.com
at October 23, 2012 No comments: 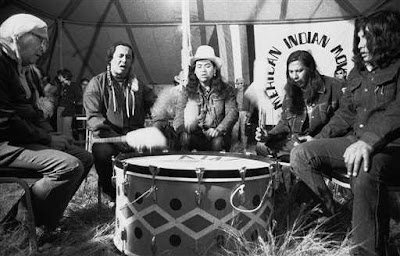 "Every policy now the Palestinians are enduring was practiced on the American Indian."
Russell Means
By Brenda Norrell
Censored News
http://www.bsnorrell.blogspot.com/2012/10/russell-means-solidarity-with.html

The tribal flag at the Oglala Lakota Nation office is flying at half mast today, Tuesday, in honor of Russell Means, whose lifetime of resistance has inspired a generation of Indigenous rights warriors.

The life of Russell Means, a warrior for the people, will be celebrated on Wednesday, Oct. 24, in Kyle, South Dakota. Means' piercing words and clarity of style on American Indian rights, placed him at the forefront of the struggle of the American Indian Movement that spans four decades.

Means passed to the Spirit World on Monday with the Morning Star at 4:44 am, at home in Porcupine, South Dakota, on Pine Ridge, surrounded by his wife Pearl, family and friends.

From tackling the BIA superintendent on the Navajo Nation during a citizen’s arrest, to leading the Columbus Day protests in Denver, to demanding that the Lewis and Clark Expedition leave South Dakota, to the formation of the Lakotah Republic in his homeland, Means was a symbol of the bold fearlessness of the American Indian Movement.

Whether he was facing off with BIA officials in Washington, or confronting them on the Stronghold in the Badlands where Lakotas fled after the Massacre of Wounded Knee, Means symbolized the AIM stance of never backing down.

Means fight for human rights extended beyond the Occupation of Wounded Knee and the US borders, to solidarity with Palestine. Although Means was hospitalized with cancer and unable to speak at the recent Russell Tribunal on Palestine in New York, his stance was clear. Means said what is happening now to Palestinians is what happened to American Indians. "Every policy now the Palestinians are enduring was practiced on the American Indian," Means said in an interview.

When Bolivian President Evo Morales took the lead in global climate talks, the defense of Mother Earth, and upholding the Rights of Nature, Means said, "This is what tribal councils should be doing."

During his lifetime of fighting for justice, Means demanded that the US honor treaties and return stolen lands. He said the only people who get ahead are those who sell out to the colonial system. He said the United States does not want to be reminded of the smallpox blankets, theft, colonialism and mistreatment of the American Indian. Further, he said most Americans do not realize that the financial collapse of this country is only beginning. Americans cannot continue the lifestyles of consumers when there is no money.

Means said Indian lands have become open air concentration camps. "If you chose to stay on the reservation, you are guaranteed to be poor, unless you are part of the colonial apparatus set up by the Bureau of Indian Affairs, set up the United States," he said.

"Our grandmother the Mother Earth is tired of the human race."

I wish I was there to talk with you in person and share with you the sorrow that I feel with the passing of Russell Means, my brother, my friend, and inspiration on many levels. Russell Means will always be an icon whenever the American Indian Movement is spoken of and whenever people talk about the changes that took place, the changes that are taking place now for Indian people.

One thing about Russell I always remembered, and I think someone else once said it, you may have loved him, or you may have disliked him, but you couldn't ignore him. I'll always remember when an elder said one time, I was at a ceremony and I asked what this half shaped moon circle on the ground meant, and he said it was a symbol of the circle of life, the never ending of the circle of life, and I said there is only half a circle, and he said the other half was unseen, it is the spirit world. For Indian people it never ends, we don't have a linear existence, so I know I will see Russell again, and I take comfort in that thought. For men like Russell Means don't come along in a lifetime very often. He was truly an inspiration for all of us younger guys at the time. He had good words to say, he was eloquent when he spoke them, and he spoke English as clearly and precisely and as articulate as any one I have ever heard speak. And he knew what he was talking about. And I know all of you out there, as well as myself, will always remember our friend, our brother and fellow activist, and how he stood with us to recapture the freedoms we've lost, and protect the ones that we still have, and bring about a better future for our people, and all people of this Mother Earth, who's nature is in peril.

In the spirit of Crazy Horse, and Russell Means.

The family of Russell Means invited others to celebrate his life:

The family of Russell Means invites you to join us in “Honoring the Life of Russell Means." The honoring will highlight his life, leadership and the eternal fire that he re-ignited throughout Indian Country.
October 24, 2012, begins at 10:00 a.m. to 10:00 p.m. MST, at Little Wound High School Gymnasium in Kyle, South Dakota USA, on the Pine Ridge Indian Reservation.
Russell Means, a self-described “Oglala Lakota Patriot and Freedom Fighter," began his journey to the spirit world at 4:44 am, with the Morning Star, at his home and ranch in Porcupine.
This Honoring will be the first of four opportunities for the people to honor his life. The next three Honorings are tentatively scheduled as follows: 2nd Honoring at Wounded Knee’73 Occupation Memorial (Feb 2013); 3rd Honoring at Wind Cave State Park, SD (June 2013); 4th Honoring on Russell’s birthday (Nov 10, 2013) at location to be determined.
There will be a designated media area at the Honoring on Wednesday at Little Wound School. Press credentials required.

Contributions of star quilts, blankets and food to feed the people will be appreciated, and may be brought on Wednesday, October 22, directly to Little Wound High School, Kyle, South Dakota.
Financial contributions to advance the visionary work of Russell Means can be sent to:
TREATY Total Immersion Educational Endowment Fund
Administrative Office
P.O. Box 110
San José, NM 87565
Paypal contributions can be made at: www.treatyschool.org

Russell Means at his best, writing about the dogs, ponies and smokescreen of the US 'listening conferences'