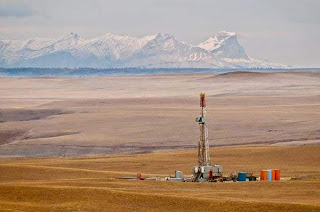 Save Our Last Sacred Chief Gathering Will Continue Saturday, Aug. 17, 2013, to Protest Fracking on the Blackfeet Reservation


Photo: A drilling platform rises on the Blackfeet Reservation with Chief Mountain and Glacier Park in the background. TONYBYNUM.COM

The Save Our Last Sacred Chief gathering will continue as planned on Saturday despite  a press release put out by the Blackfeet Tribal Business Council on Wednesday. Organizers feel their concerns were not addressed and the gathering is an important show of solidarity against future hydraulic fracking on the reservation.


Browning, Montana – The organizers of Save Our Last Sacred Chief have decided to continue with the event, which was originally planned as a protest against proposed hydraulic fracking near Chief Mountain. The mountain on the border between Alberta and Montana is considered extremely sacred by the people of the Blackfoot Confederacy.


The proposed fracking has been canceled, but a news release put out by the Blackfeet Tribal Council did little to assuage opinions that the council behaved unethically and contrary to traditional Blackfeet values. One sentence in the council's news release read, “the Blackfeet Tribal Business Council has the absolute right to develop its own resources on its own land,” (italics added to emphasize key words). This sentiment illustrates what many Blackfeet feel is the council's tendency to make potentially detrimental decisions about hydraulic fracking on the reservation without weighing input from tribal members.


Save Our Last Sacred Chief organizers also feel that their original concerns were not addressed in the Tribal Councils press release. The proposed “fracking” was canceled only due to a failure by Nations Energy, L.L.C. to pay the lease in full by the proposed deadline. This sort of cancellation does not negate the initial motivations for the gathering as it leaves open the possibility of drilling on land that many Blackfeet citizens believe is disrespectfully close to such a sacred site.


Save Our Last Sacred Chief is organized by Pauline Matt of Browning and Kimberley Weasel Fat and Lori Brave Rock of Alberta, Canada. The goal of the event is to “gather peacefully for ceremony, prayers and blessings for our sacred Chief Mountain.” Those who attend are urged to bring their own food, water, offerings, and other supplies. The event will begin as scheduled, at 11:00 in the morning on Saturday, August 17th. Everyone is Welcome.