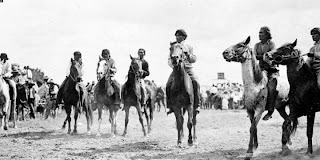 "The horse is our medicine," states the resolution of the Nahooka Dine', traditional Navajo medicine people opposing the slaughter of the horse. The resolution was passed by traditional Dine' practitioners gathered at lower Black Mesa.

Nahooka Dine' said the UN Declaration on the Rights of Indigenous Peoples requires both the Nation Nation and United States governments to consult with Indigenous Peoples who are guaranteed the right to free, prior and informed consent.

The Navajo Nation government's support of horse slaughter represents recklessness and continues the assimilation of boarding schools when Navajo children's hair was cut and they were forbidden to speak their Dine' language. The Navajo Nation is demonstrating recklessness to Navajo children, a behavior that leads to domestic violence and drug abuse. The tribal government is demonstrating the same behavior that led to the slaughter of the bison.

"We see this mass execution of our relatives, the horses, as the rotten fruit of a bad seed that was planted in the minds of our children in the earlier days," the resolution states.

"Our children must be taught to value life, otherwise they will treat their own lives recklessly and be drawn toward substance abuse, domestic violence, suicide and other behaviors that are not in accordance with Our Way of Life."

﻿﻿﻿﻿﻿﻿﻿﻿Leland Grass, Dine', told Censored News, "The resolution was passed by the Elders and Medicine people, most of them don't know how to read and write, or speak english.

"The chapter house is in a modern way set up and the language used there is english. There are no translations when documents are read and voted on.

"This resolution is made from them, at the traditional fire of their homes and ceremony grounds, and gathered by clanship Ke', and looking forward for a better life for their children.

"The Navajo Nation legislation is working backwards, not all Chapter Houses submitted a round up resolution, still the Navajo Nation Legislation voted for a round up. The Navajo Nation Agriculture Department and Ben Shelly do not return our calls. We asked the Agriculture Department Manager Leo Watchman for the July Summer session legislation (when the resolution was passed) for the round up of Dine' Peoples land horses. He said he will as soon as he gets off the phone, but he never did. Numerous calls in a four day period following up, and still to date none.

"The Ben Shelly Administration spokesperson Erny Zah stated on a nationwide TV broadcast that, 'The reason why the Navajo Nation government is not rounding up the horses in the pass is due to the Dine' Peoples' ceremony and cultural ties with the horses in songs and prayer. This is the reason why we have so many horses and the only way is to go against the songs and prayer, in order to have the horse removed off the reservations." http://live.huffingtonpost.com/r/segment/wild-horses-robert-redford/520862a702a760482600058b

"To me, this is not how we (elders of Dine') live. It is the way the US Congress treated us long ago and now it is the way how our own Navajo Nation government is treating us. Our ceremony needs to be acknowledged on a daily bases. It is the Creator's doings to have our people live the way they are. The Law of the Creator never changed, it stays the same, and Navajo Nation government is trying to change that. That's a hell of a lot to pay for, for people saying or doing those things and it will have a domino effect on our newborn, unborn and ones in schools, our children.

"The disrespect of this way of life will be learned, courtesy of the Navajo Nation Government and its president Ben Shelly. They show no remorse of our ceremonies and the way of life, put us in a square box where we can't breathe, as in prison like base modern element. The Reservation already has many boxes in one unit, from big to small staked in same box. There is no agriculture provision from our Department of Interior, BIA and Navajo Nation. They mismanage our money at the end. The $1.3 million approved for round up of our horses and slaughter is somewhat doing the same thing, running it to dry, mismanaging and stealing our horses. Ben Shelly stole $9,000 from Navajo Nation government when he was vice president. What he got was a slap on the wrist and stayed as new elected president for the Navajo Nation. I can see where this stealing is coming from," said Leland Grass. 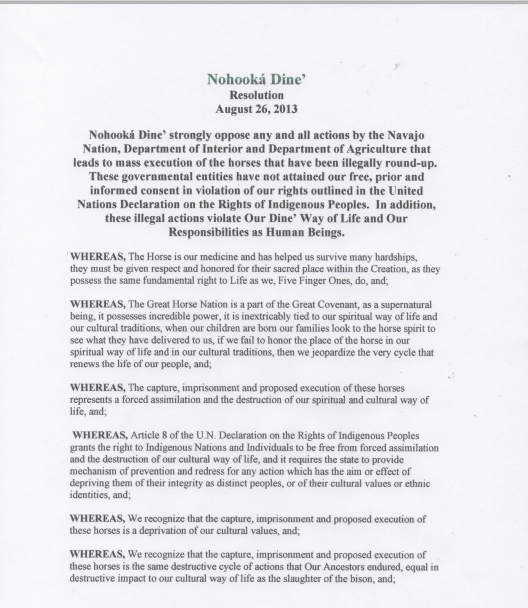 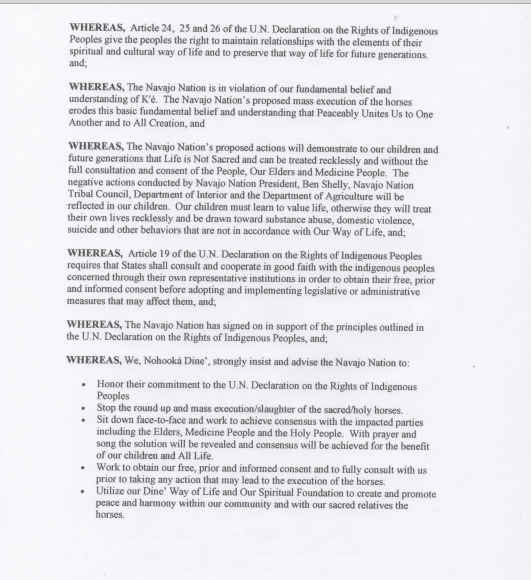 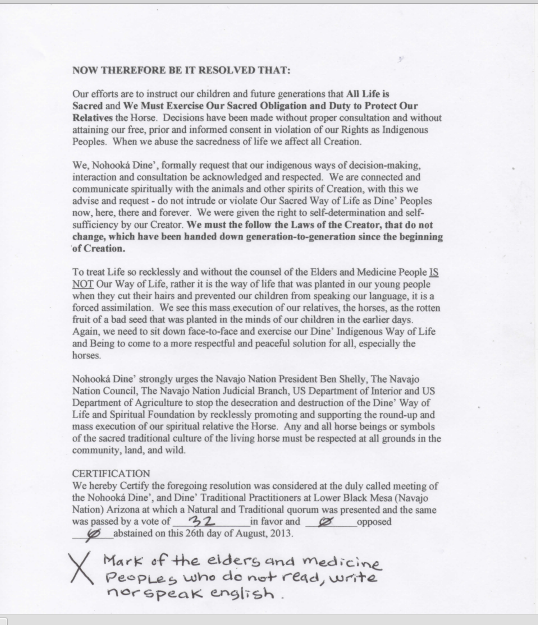 This is just about the most outrageous thing I've ever read - even including all the other lies and falsehoods the BLM and Department of Interior have told in order to dupe the American public into agreeing to the decimation and slaughter of our Native horses just as they did with our Native Peoples.

I will share and spread this as far and as wide as I can. I am totally against the slaughter of ANY of our horses - domestic OR wild. I have seen horse slaughter, and it is cruel beyond belief. My own horse was almost stolen right out of his stall in the middle of Dallas when the slaughter plants were operating in Texas.

This must not be permitted to happen again. Anywhere on American soil.

"Financial Strategy... where the rubber meets the road, when the first horse is slaughtered... think, putting the (slaughter) facilities in Indian Reservations... taking "everybody' and the Legislature out of the equation."

Boyd Spratling, Veterinarian on BLM Advisory Board, from Minutes of October 13, 2011

Ben Shelley is falling for the plan.

Please, tell us what we can do. I called the 2 phone numbers given on the FB post, but got now answer.
Heather in Oregon