Attacks on journalists: The lies that make it possible

August 21, 2013
Attacks on journalists are made possible by PR spin, a sleeping public and the collapsed media in their easy chairs 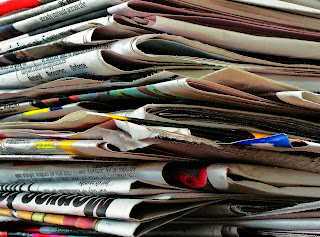 Today Censored News takes a look at what others are writing and the fresh attacks on journalism, journalists and truth.

First of all, a big welcome to our news readers. Most of our readers today, outside of the US and Canada, are in Russia, Germany, France. China, UK, India, Indonesia and Romania. It is good to know that there are so many readers in China, Russia, Ukraine, Poland, Germany and elsewhere where there is a history of censorship and oppression. They continue to be the largest group of global readers at Censored News each month.


Of course in the United States, there is another type of censorship and oppression. It is disguised with PR spin campaigns by politicians; furthered by lies disguised as history in classrooms; and then placed in the peoples faces daily with the media's selective, fraudulent and bogus selection of the news.

Really, how else could Obama continue to kill innocent women and children with drones during targeted assassinations with a kill list? How could Guantanamo continue? How could whistlebowers like Bradley Manning be sentenced to prison for decades?

Today, an assault on journalism is being carried out in the United Kingdom, by the UK and its partners, with the US as ringleader, and its complicit partner the United Nations.

Today, Democracy Now reports that the Obama administration knew British officials were going to detain David Miranda, the partner of Guardian journalist Glenn Greenwald, who has revealed the National Security Agency’s massive spy practices. The Guardian has revealed the British government threatened legal action against the newspaper unless it either destroyed Snowden’s classified documents or handed them to British authorities.

RT reports: "UK authorities reportedly raided the Guardian’s office in London to destroy hard drives in an effort to stop future publications of leaks from former NSA contractor Edward Snowden. The action is unlikely to prevent new materials coming out."

Felice Cohen-Joppa, nuclear resister and human rights activists in Tucson, said, "Bradley Manning got the same number of years in prison that Sr. Megan Rice, Michael Walli and Greg Boertje-Obed are facing at their Sept. 30 sentencing for their act of disarmament at the Y-12 nuclear weapons complex.

"Shame on a nation that imprisons it's peacemakers and whistleblowers."

Politicians and spin masters never seem to learn that attempts to silence the media only magnify the voice, and wake up a sleeping lethargic public. The polished campaigns and perfect words of politicians and corporate thieves all become tarnished with the passage of time.

The best journalists look ahead, and based on their experience and instinct, write and reveal forward thinking news.

Meanwhile, a takedown notice over a film about the Alberta tarsands is sure to increase interest in the production. The Electronic Frontier Foundation reports on the move by the Alberta tourism bureau to silence the truth about the tarsands by using a copyright violation notice. As of today, the film has been removed from YouTube, but "Welcome to Fort McMoney," is still available on the fundraising project website.
https://www.eff.org/deeplinks/2013/08/using-copyright-silence-oil-company-satire-how-crude

In Phoenix, Sheriff Joe Arpaio -- known for his racism and yet still promoted as a folk hero by an irresponsible national media -- is now in a face-off with the white supremacist Minutemen. Migrants and all people of color in southern Arizona have long been prey for both Sheriff Arpaio and the Minutemen.

In his column, Matthew Hendley at Phoenix New Times, provides a clear perspective.

"Before this week, it's hard to imagine why Sheriff Joe Arpaio would ever talk down the Minutemen, seeing as he always seems to be the one to back some sort of controversial fringe movement. However, he's now talking about how lucky a Minuteman is to not get shot 30-or-so times. Of course, that's after 49-year-old Minuteman Ronald Malley allegedly pointed a rifle at a sheriff's deputy, because he confused him for a drug smuggler.
http://blogs.phoenixnewtimes.com/valleyfever/2013/08/is_it_surprising_to_hear_joe_a.php

In Indian country, the collapse of journalism spreads like a fungus.

Newspapers like Indian Country Today rely on plagiarism and rewriting others hard work.

Plagiarism is not a victimless crime. These days, unpaid reporters spend their last dollars to be present and cover the news. Then, profiteers like those at Indian Country Today come along, who never leave their homes. They plagiarize or rewrite the work of the good hearts from the Internet, using the sacrifices of those present for their own paychecks. The newspaper said recently its editors came from Martha Stewart Living and Playboy, hardly background in American Indian news.

In Arizona, the Salt River Project, the operator of the dirty coal fired power plant Navajo Generating Station, continues to throw its money around in Indian country, and the media keeps quiet about it. The fact that Salt River Project pours its ill-gotten gains into projects and advertising, keeps most of the media as quiet as concubines.

It means Peabody Coal and the dirty coal industry continues, and the cities of Phoenix and Tucson can continue to waste pristine water on their golf courses and swimming pools while Navajos on Black Mesa haul their water and breathe the air of dirty coal. The Salt River Project even throws its dollars into claiming to be green, as evidenced in a recent copy of an Arizona green magazine. The first advertisement is a full page spread from SRP.

How many news reporters spend any time out at Black Mesa? How many reporters show up at the tarsands resistance campaigns? Some reporters don't even leave their homes to walk down the street. They wait instead to plagiarize others work from the Internet.

The media in Indian country is just as much to blame as the mainstream media for not showing up, and for failing to report the truth about Navajo relocation, Peabody Coal and the Navajo Generating Station.

The work of a reporter is not to be popular, it is to be present, to be out there covering the news.

Expect them to show up.

Congratulations to the few, from Wikileaks to The Guardian, who take the risks and suffer the consequences.

Brenda Norrell has been a news reporter in Indian country for 31 years. She was first a reporter for Navajo Times, then a stringer for AP and USA Today, during the 18 years that she lived on the Navajo Nation. After serving as a longtime staff reporter for Indian Country Today, she was censored repeatedly, then terminated. As a result, Norrell created Censored News.
Now nearing its 8th birthday with 2.4 million views, Censored News is published without advertising or sponsors.