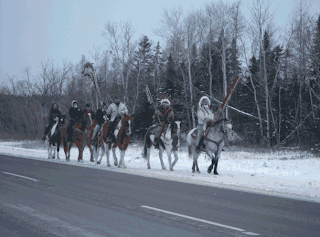 I spoke to Gus Higheagle this morning and the Dakota Unity Riders are in Woodstock where their ten horses are being well taken care of. Gus tells me that there are 23 Dakota in their group. Their trucks have broken down but have just been repaired. Gus said that he was contacted by someone from the Seventh Calvary. I asked him who but he had to go back and check his notes for the name. The man said the Seventh Calvary still exists and that they have the Seventh Calvary flag. Gus told him, "you should surrender that flag." The man got angry and left.
I attach some pictures from the Dakota Unity Riders on TransCanada Highway when the Vancouver Olympics organizations were travelling by. The murdered and missing women was the issue. Vancouver was where 49 women were killed by serial killer Robert Picton. The Canadian Olympic Organizers refused to stop and ignored the demonstration. The Dakota continue to reach out to the world with not only what happened to their people but with a spiritual message. The world faces extreme danger. The Dakota have lifted the pipe. Their message needs to be listened to. Global warming is not something in the future, it is here now.
As a political people, Dennis Pashe who is a former Dakota Chief and I traveled to Iran last fall. We met with the Iranians and were especially well treated. What was important to us was talking to Iranian youth in the universities. Seventy percent of the students in universities are women, not at all how the western media presents Iran. Whether American media ignores the Dakota or not, the Dakota message will be taken worldwide. It will be heard. The terrorism and genocide visited upon the Dakota is something that must be told. See attached file Museum Concept.
Canada refuses to allow the Human Rights Museum in Winnipeg to use the word Genocide to describe what happened to indigenous people in Canada. The United States does not have a Museum that shows the real terrorism and Genocide that occurred against the Dakota.The United States and Canada have now signed the United Nations Declaration on the Rights of Indigenous Peoples but continues to ignore the rights of the Dakota. Dakota lands in the United States are continued to be denied to Dakota in Canada despite the Treaties.
I ask the Iranian people to promote the rights of the Dakota. Iran as the lead of the 120 Non Aligned Countries can help the Dakota to achieve justice by bringing the Human Rights of the Dakota to the world. The Dakota are asking for OPEC help to deal with oil in the Bakken Formation which is also in Manitoba and Saskatchewan. Dakota receive no royalty or payment from the oil in Manitoba and Saskatchewan. Is it possible for the Dakota Chiefs to make a presentation to OPEC in Vienna in December 2013?

First Nations people in Canada can help by depositing donations at CIBC. Gus Higheagle chequing account at CIBC Transit # 00047 Bank #010 Account # 7177933. Others can contact Gus Higheagle directly on his cell phone.
I will posting pictures and information on the progress of the Dakota Unity Riders as they send me the information. I will contacting Mohegan Sun and Foxwoods Casinos to see if they can help financially and the Mohawks are currently helping the Dakota. The Dakota have sold Mohawk cigarettes in Manitoba and Chief Frank Brown will likely be sent to jail in September after the court hearing on the cigarette case.

Its too bad the seventh calvary acted badly. On a better note, the riders are due in Danbury and Newtown, CT where they will be hosted by the Governor's Second Horse Guard with close historic ties to the calvary. Both the riders and the horse guard have said they are deeply moved to come together in a spirit of peace and healing, and to honor those who perished in historic wars. With the blogger's permission, I will post photos of the two groups
coming together to remember Albert Afraid of Hawks journey home last year, and in the spirit of healing for the children who died in Newtown.