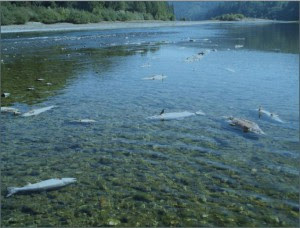 "A die-off of Trinity River salmon, if it were to occur again this year, would be very harmful to the many Hoopa tribal members who rely upon these fish." -- Hoopa Valley Chair Danielle Vigil-Masten

The Westlands Water District and San Luis Delta Mendota Water Authority filed a lawsuit in federal court in Fresno on Wednesday, August 7 in an attempt to stop increased flows on the Trinity River set to begin on August 13.

The lawsuit alleges that the Bureau of Reclamation's planned releases from Trinity Reservoir to protect salmon in the lower Klamath River would be unlawful and would further cut water available for the growers, causing them "significant and irreparable harm."

"Plaintiffs will be irreparably harmed by the lost water supply from the proposed releases, up to approximately 109,000 acre-feet," the lawsuit stated. "Instead of releasing that water to the Trinity River, Defendants could export it to the Sacramento watershed to support deliveries to members of the Authority, including Westlands. By doing so, Reclamation could restore the 5% allocation to south-of-Delta contractors that was cut on March 22, 2013."

"In addition, increasing exports from the TRD to the Sacramento River watershed would increase hydropower generation in 2013," the document claimed.

The lawsuit documents are available at: http://mavensnotebook.com/wp-content/uploads/2013/08/Trinity-Complaint-as-filed.pdf

The Hoopa Valley Tribe responded by intervening in the lawsuit in support of increased releases down the Trinity. You can read the Tribe's intervention here: http://www.c-win.org/webfm_send/339

"Our fisheries scientists are very concerned about developing fish disease conditions in the Lower Klamath River, conditions that will affect the salmon runs returning to the Trinity River," said Danielle Vigil-Masten, Chair of the Hoopa Valley Tribe. "Accordingly, the Hoopa Valley Tribe has strongly supported the decision of the Bureau of Reclamation to release additional Trinity River water to ameliorate conditions in the Lower Klamath River. A die -off of Trinity River salmon, if it were to occur again this year, would be very harmful to the many Hoopa tribal members who rely upon these fish."

The Yurok Tribe and Pacific Coast Federation of Fishermen's Associations (PCFFA) will also intervene in the lawsuit in support of the Trinity River releases, according to Zeke Grader, PCFFA Executive Director.

The release will supplement flows in the Lower Klamath River to help protect an expected large returning run of adult Chinook salmon from a disease outbreak and mortality, according to Pete Lucero, Bureau of Reclamation spokesman.

The third largest run of fall Chinook salmon on record is expected to ascend the river and its tributaries this year - and representatives of Indian Tribes, fishing groups and environmental organizations are trying to prevent a fish kill like the one of September 2002 from taking place this season.

"It's deja vu all over again," responded Tom Stokely, Water Policy Analyst for the California Water Impact Network (C-WIN). "Back in 2002, these same water agencies blocked downstream releases of Trinity River water, which could have prevented the deaths of tens of thousands of adult salmon. Now they want to do it again. If they are successful, a major fish kill is likely."

"The bottom line is that the Bureau of Reclamation has promised to deliver much more water than is available in the system. These conflicts will only worsen until water contracts and water rights conform with hydrologic reality," he concluded.

In a press release on Wednesday, the Hoopa Valley Tribe warned that the Bureau of Reclamation (BOR) plan to supplement Klamath River flows to avoid a fish kill may not be sufficient. “We need more water and we need it sooner,” said Hoopa Fisheries Director Michael Orcutt.

"The Klamath River is expecting a large fall run of salmon, yet the river is extremely low and warm. These conditions are similar to those in 2002 when an epidemic killed over 60,000 adult salmon in the Klamath River," according to Orcutt.

The target date for augmented flows in the Lower Klamath River is August 15. "Because of the two day travel time between Lewiston Dam and the Lower Klamath, the releases from Lewiston Dam will begin in the early morning hours of August 13 and end in the last week of September," Lucero explained.

An Environmental Assessment and Finding of No Significant Impact were prepared in accordance with the National Environmental Policy Act, and are available online at http://www.usbr.gov/mp/nepa/nepa_projdetails.cfm?Project_ID=14366.

The Trinity River, the Klamath River's largest tributary, provides the only out of basin water for the federal Central Valley Project. The Brown administration is currently fast-tracking the Bay Delta Conservation Plan to build the peripheral tunnels under the California Delta to export massive quantities of Sacramento and Trinity River water to corporate agribusiness and oil companies.

The construction of the tunnels would lead not only hasten the extinction of Central Valley salmon and steelhead, Delta smelt, longfin smelt, green sturgeon and other species, but would devastate the salmon and steelhead populations of the Trinity and Klamath rivers.

The Environmental Protection Information Center is urging people to take action by calling on the Department of the Interior to release more Trinity water and prevent another disastrous fish kill: http://www.wildcalifornia.org/blog/klamath/
at August 13, 2013