ST LOUIS -- Native Americans walking across America on the five-month Longest Walk 4 Return to Alcatraz arrived in St Louis late today and received a surprise message from longtime imprisoned Native American activist Leonard Peltier.
Peltier told the walkers, "In our stories among my people, we say that at times like this, an eagle or a hawk will visit, to see what you are doing. We as Native people know that not only are they visiting to see what you are doing, but they have been sent to collect the thoughts and prayers of the people, to carry them back to the Creator."
The long walkers include two Native American young adults walking across America for the third time. Lisa Peake, Anishinabe/Pomo, and Carl 'Bad Bear' Sampson, Western Shoshone, walked across America on the Longest Walks 2 and 3.
Michael Lane, who walked across America in the original walk in 1978, is among the group of walkers who left Washington DC on July 15. Lane is walking with his wife Sharon Heta, Maori from New Zealand. The couple and their daughters walked across America on Long Walk 2 in 2008.
Lisa Zahner Reinhold, of the Oglala Commemoration, shared Peltier's message with the walkers in their St Louis area campground tonight.

Peltier's message
Peltier told the walkers, "I want to take some time to thank each and every one of you for committing to do this walk and to carry prayers for me. I also want to acknowledge and thank your families for supporting you and being understanding of the time you are taking to complete this walk. I know it can be a hardship so please know that I appreciate you remembering  and doing this for me. I only ask that you keep clear minds and good thoughts as you continue this journey.
"In our stories among my people, we say that at times like this, an eagle or a hawk will visit, to see what you are doing. We as Native people know that not only are they visiting to see what you are doing, but they have been sent to collect the thoughts and prayers of the people, to carry them back to the Creator.
"At one time, we as humans, were able to communicate directly with all living things, especially the animals. Although we have lost that ability to a degree, the animal life still carries on with their responsibility, and therefore, are messengers for the Creator. Please, for me, let the message they take back to the Creator be a positive reflection, of who we are as relatives to one another. I
will send my good thoughts with you at this time.
"In my mind, I am walking with you.  Please, be safe. Doksha!"
Peltier signed the message, "In the Spirit of Crazy Horse Leonard Peltier."
Leonard Peltier International Tribunal on Abuse of Indigenous Human Rights, in Wisconsin in October
The Leonard Peltier International Tribunal on the Abuse of Indigenous Human Rights will be announced on Sept. 4 at the National AIM Interpretative Center, 1113 East Franklin Avenue, Suite 3210A in Minneapolis.

The speakers are Dennis Banks, Bill Means, and Clyde Bellecourt of the American Indian Movement Grand Governing Council; and Dorothy Ninham, former Oneida Nation Judge and Director of event sponsor Wind Chases The Sun, Inc., a nonprofit organization dedicated to Indigenous issues.
"We have an oral tradition In this way, the stories about our 500 years of oppression have been passed down through the generations. Now, we have the means to record that history and share it with the world. The Leonard Peltier International Tribunal on the Abuse of Indigenous Human Rights will tell our stories with a focus on the last 40 years, " said Dorothy Ninham, founder and director of Wind Chases the Sun.
Details regarding the Leonard Peltier International Tribunal on the Abuse of Indigenous Human Rights -- scheduled for 2-4 October on the Oneida Nation Reservation in Oneida, Wisconsin -- will be presented during the press conference to be held on September 4, 2013, in Minneapolis.
The purpose of the historic, public tribunal is to digitally document first-hand witness accounts of 40 years of malfeasance in Indian Country, and the continuing struggles of Indigenous Peoples.  Issues will include but are not limited to fishing rights, the sterilization of Indigenous women, extreme poverty, theft of tribes' natural resources, environmental issues and their impact on Indian reservations, the horrific rate of suicides among Native children, and the wrongful conviction of Leonard Peltier (specifically the events that led up to the June 26, 1975, incident at the Pine Ridge Indian Reservation in South Dakota and the effects on survivors of this period). All Indigenous Peoples are invited to attend. Tribes are encouraged to send a delegation of tribal elders to participate.
Purpose of Longest Walk 4
The Longest Walk 4 is carrying the message of Indigenous sovereignty across America and urging freedom for Leonard Peltier.
The walk stated as its purpose, "The Longest Walk 4: Return to Alcatraz is being initiated by those on the original, The Longest Walk in 1978. It will begin on July 15th, 2013 in Washington D.C. and travel to Alcatraz on December 22, 2013. The purpose of this Walk will be to reaffirm the heart of Traditional Tribal Sovereignty rooted in Ceremony and land based spiritual relationships. We call on all Indigenous Peoples to come and support this Walk.
"We have gone to Washington D.C. many times to seek justice, the protection of treaty rights, and the continuing existence of our Peoples and Ways of Life. They have had their opportunity. The time has come to reclaim for ourselves the prayers that have gone east and bring them back full circle to Alcatraz, the symbol of the modern assertion of what has been called the Red Power Movement. We Walk to educate our own Peoples on what Tribal Sovereignty means from an Indigenous Peoples way of life. We Walk to affirm to the world that we still continue as free and sovereign Peoples as we define it. We Walk to remind those of our Peoples engaged in dealing with the nation-states that tribal sovereignty is not defined by non-Indigenous laws, rules and regulations; nor by economic development, good governance, and corporate structures. These elements may be pragmatic, but they do not define us. We Walk with the spirits of our ancestors for the present and for the future generations so that we as Peoples do not forget what makes us Indigenous.
"We also Walk to remind all peoples that Leonard Peltier and his continuing incarceration is symbolic of the continuing incarceration of all Indigenous Peoples in the policies and political structures of the colonial nation-states. The time has come for the release of Leonard Peltier based on principles of reconciliation. It seems strange and one sided that nation-states seek forgiveness for horrendous crimes against our Peoples such as massacres, land confiscations, the theft of our children to abusive boarding schools and such, yet can’t find a way to release a person who has served over 30 years in prison, for what happened during a time of conflict. Leonard Peltier should be freed on this principle of reconciliation regardless of what one may think in terms of justice, innocence or guilt.
"As this Walk is about the spiritual foundations of our sovereignty as talked about in The Longest Walk Manifesto of 1978, we also ask for elders and spiritual leaders to come and lend support and advice where possible. To this end we are also going to have a Spiritual Gathering at Cahokia Mounds in September, 2013."
The route is available at www.returntoalcatraz.com
Updates at http://www.bsnorrell.blogspot.com
brendanorrell@gmail.com


Fri - Aug 30 - Black Bear Bakery Presentation- 4ish- 2639 Cherokee St. St. Louis
Followed by a Sunset Ceremony at Monk's Mound
Sat. Aug 31 - Rest Day -
Sun. Sept 1 - Walkers will be in a private ceremony.
Mon Sept 2 - The Walk begins at Cahokia Mound Entrance Sign at 9 am, we will start the walk from there, cross the river and stop at the arch, then onward thru St.Louis.
This walk is open to all who would like to join.

The Walkers have moved to Babler State Park on the Missouri side off Hwy 109. They plan on being there until Wed. As I mentioned before the heat is deadly out here, so they are on a much needed rest. Horseshoe Lake camp site was an open field with no shade and the pavilion was loaded with wasp nest, with no showers.. So they moved over to Missouri, (because Mo. parks rock)

On behalf of the Oglala Commemoration and Leonard Peltier, a statement from Leonard was read and the walkers were presented with a Free Peltier Flag to carry on their journey.

LONG WALK 4 WEBSITE Route info and Paypal for donations:http://www.returntoalcatraz.comIf you can host the walkers, or arrange for meals or camping, please contact: Logistics Coordinator: Wabus44@gmail.com Ph: 202-436-6576

Thank you Christine Prat for the French translation! 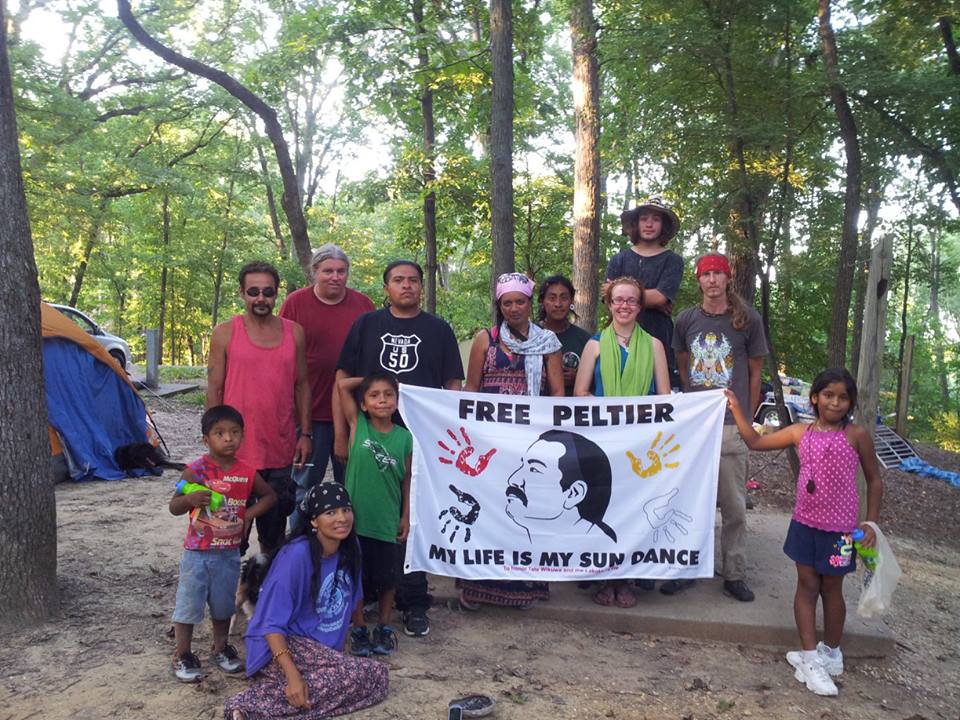 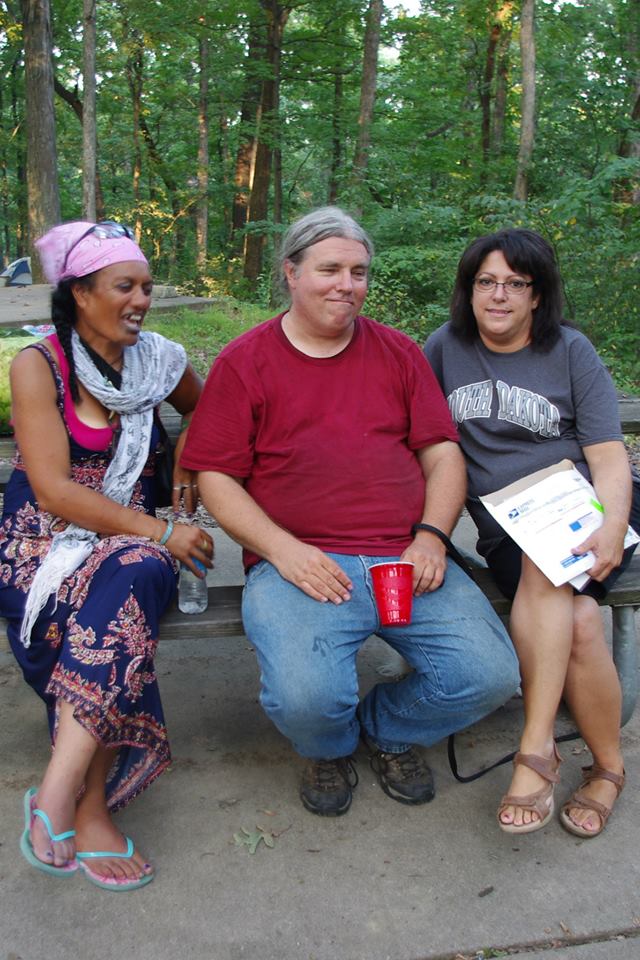 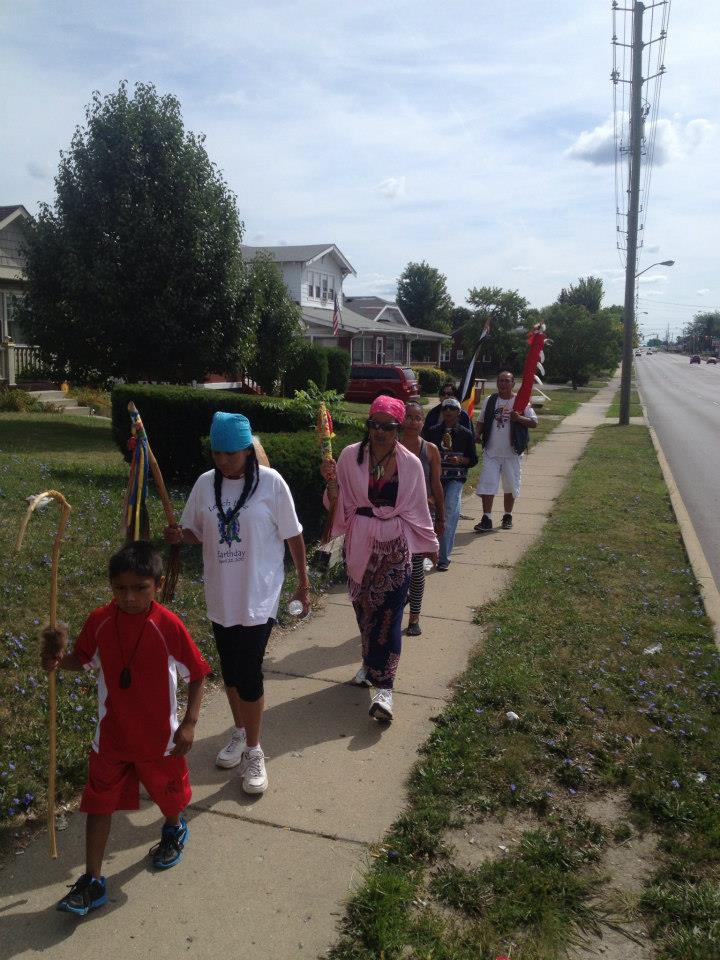 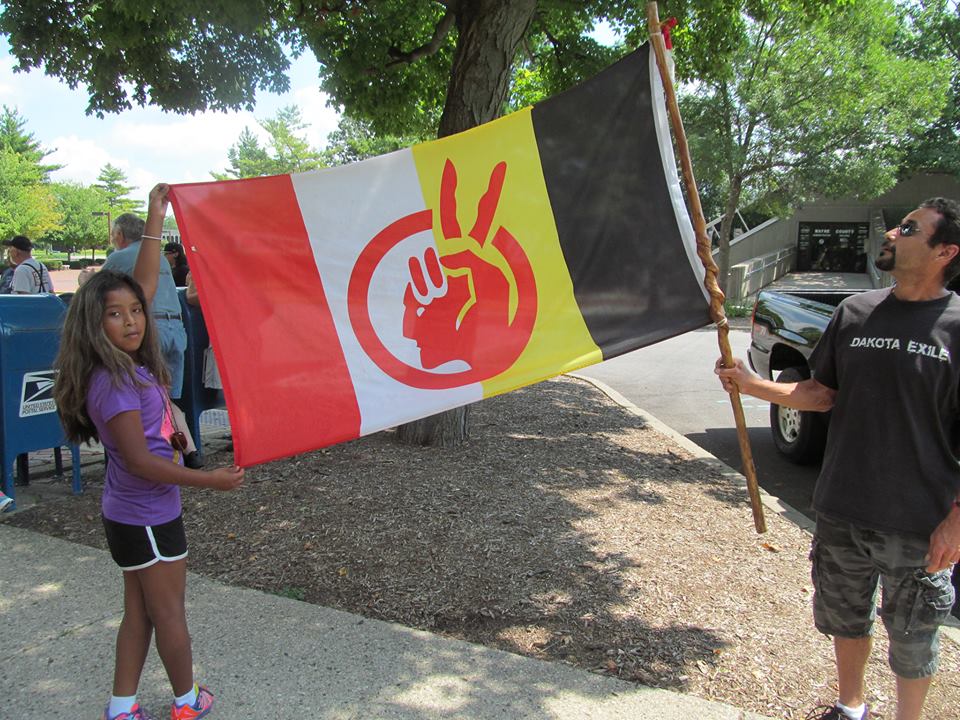