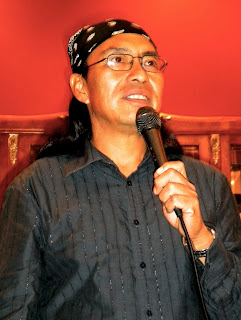 Our history as Chahta's and as Native people needs to be remembered in the context as our ancestors lived it. When we know our history, we can better prepare for the future.
The host, Eaglemanz, is Ben Carnes of the Chahta Nation from Indian Territory who has his own life experinces to share from standing up for Native rights in and out of prison. He has the rare distinction of being a recipient of the 1987 Oklahoma Human Rights Award while still incarcerated.
Currently, he lives in Broken Bow of the Chahta Nation with his family. He would ask everyone to join in to listen to his first show. Yakoke!
Posted by Censored News, publisher Brenda Norrell at August 01, 2013