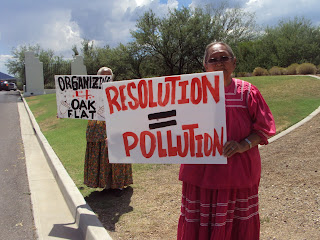 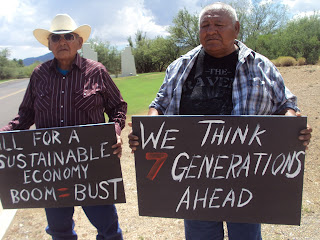 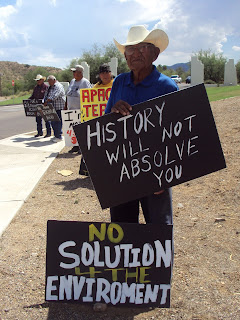 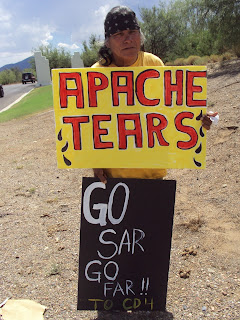 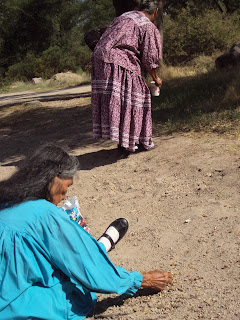 Tribal Elders protest passing of H.R. 687 in Globe and Superior

Claims of cultural and NEPA violations made to Congresswoman Ann Kirkpatrick

Article and photos by Sandra Rambler

On Aug. 21, San Carlos Apache Tribal elders joined with various citizens of Superior, Navajo Nation elders, and several organizations and conservation coalitions that oppose HR 687. The bill is the Southeast Arizona Land Exchange bill proposed by Arizona Congressional Delegates, Ann Kirkpatrick (D-CD 1) and Paul Gosar (R-CD 4).  The tribal elders posted signs and verbally confronted Congresswoman Kirkpatrick for disregard for cultural and NEPA violations and expressed concern for the depleting water in Arizona and demanded that the groundwater from the San Carlos Apache Indian Reservation is not tampered with through the Resolution Copper Mine proposed near Chi'Chil'Ba'Goteel at the Oak Flat campgrounds. It is protected by administrative orders by the President Eisenhower and reaffirmed by President Richard B. Nixon.
On Aug. 21, tribal elders gathered acorn at Chi'Chil'Ba'Goteel (Oak Flat) after a prayer ceremony asking the Creator to bless the tribal leaders, all indigenous people and to stop the passage of HR 687, Southeast Arizona Land Exchange bill proposed by AZ Congressional delegates, Ann Kirkpatrick and Paul Gosar.

Miss Kirkpartick,
We are stonger than you think. WE are smarter than you think. We were here before you came so dont be acting like you have the right to act like you saw the land first.
Think twice before you do something like this because we all know that this isnt going to turn out the way you want it to.
Sincerely(Not Yours),
The New Generation of the San Carlos Apache Tribe. :)