March 28, 2013
By Diné Citizens Against Ruining our Environment
Censored News

Obvious liabilities of Navajo Mine should prevent waste of $2.3 million more for needless “investigation” by outside firms; Deal with BHP Billiton should be dropped

Farmington, NM – As the Navajo Nation Council prepares to vote this week on approving $2.3 million to continue paying a law firm and other consultants to look into the risks of buying BHP Billiton Navajo Mine, Navajo community members with Diné C.A.R.E called the expenditure “needless and wasteful” given the well-known risks and liabilities associated with the mine.

"Buying the mine from BHP Billiton means responsibility for millions of tons of coal ash waste with toxic metals leaching into our aquifer and the San Juan River,” said Donna House of Diné C.A.R.E. “Navajo people do not want that dirty legacy on our hands, nor the massive costs of cleaning it up. We don’t need to pay millions more to high-priced consultants to know this coal deal is a bad deal.”

Three quarters of a million dollars was already approved last fall by the Council to pay consulting companies to study the matter, with little revealed to date about how the funds were spent or what results were obtained.

In January, the president of BHP Billiton New Mexico Coal told the Farmington Daily Times that demand for coal from the mine will drop 30 percent with the upcoming closure of three of five coal boilers at the Four Corners Power Plant, part of an increasing trend away from coal as a power source given its increase expense as a fuel source.
In addition to declining demand for coal, huge future risks loom in dealing with a mine with 50 years of built-up liabilities, including miles of land filled with millions of tons of coal ash waste laden with heavy metal toxins that could be contaminating groundwater. The quantity and quality of the coal in the mine are also in serious question and BHP Billiton plans to cut about 100 employees from mine operations before Navajo Nation agrees to the purchase.

“BHP Billiton appears to want out of a declining industry here and to leave us on the hook for their mess --which includes economic, health, and toxic waste impacts,” said Colleen Cooley of Diné C.A.R.E. “Instead of wasting millions of dollars more on a last gasp to cling to a dying coal industry, let’s put resources into our future, into building clean energy on Navajo land to benefit Navajo communities.” 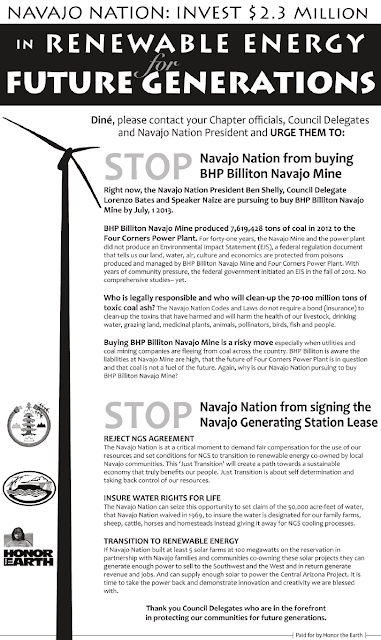 MNN. Mar. 28, 2013. On March 26, 2013, the MNN editor was invited to be the opening speaker at Champlain College in Sherbrooke Quebec. The topic was, “A Native Perspective on Canada’s Exploitation of Resources”. Two Mohawks, as is our custom, accompanied the speaker. They sat at a table facing the crowd.

Happy Champlain College students!
She did a traditional opening; explained the Seigneury of Sault Louis land,dispute which is returning vast areas to the Mohawk Nation; that Canada is not a state according to the Montevideo Convention of 1933; the genocide committed by the Jesuits, the storm troopers of the Catholic Church; the Great Peace of Montreal 1701 that created the official two row wampum relationship between the Indigenous and the visitors to Great Turtle Island; and Section 109 of the BNA Act 1867 that established the ever growing $50.3 trillion Indian Trust Fund. The presentation was legalistic and cautious.
Cartoons were inserted in the power point presentation to help them understand the basics. They were carefully taken step by step through the legal maze of their settlement history here on our land and their legal position today.

Champlain College debater.
The speaker received an ovation. Then the questions and comments began. Some in tears, said, “What happens to us?” “I came here because I love the Indians. After listening to you, now I hate them and I hate you!”  “I didn’t do anything. My ancestors did.” “Why? Why are you telling us this?” “You have no feelings for us!” I instructed them to study the Great Law of Peace to help them understand our position.
The speaker, a 73-year old elder of the Mohawk Nation, tried to make light of the provocative jibes to calm them down. This made them madder. The discussion became more and more heated. Some students stomped out. Others heckled and smirked. The air became static with anger and threats. The speaker remarked, “The truth hurts”. Almost the entire student body jeered in astonishment. The three Mohawks could feel intense anger and were ready to deal with it. And they did.

Julian Assange: “Happens to me all the time”.
For a moment the crowd calmed down. Then the insults started again. The speaker was accused of “having no feelings”. The speaker answered, “Yes, the we have strong feelings about the genocide of 100 million people and the murder of half our children placed in your church run residential schools. No one has been charged or punished for this.” More angry words flew. None addressed the legitimate issues. The sound arguments backed them into a corner. It was like they were standing on their hind legs and were ready to jump the Mohawks.
Suddenly a teacher rose up. She reminded them that, “We wanted to hear the Indigenous side. You have to listen even if she turns it inside out”.  The confrontation ended. They formed groups and began talking, some giving the Mohawks dirty looks.

“I don’t agree with your point of view”.
A native speaker should take at least three people security when they go into a potential hostile situation. Because of the rampant spread of the Owistah disease throughout the settler population, an adverse side affect is, when they don’t like the message, they might kill the messenger. As the Guess Who sang:Guns Guns Guns “You be the Red King and I’ll be the Yellow Pawn. Guns, guns, guns! Eagle all gone and no more caribou. God speed mother nature. Never really wanted to say good-bye”.
MNN Mohawk Nation News kahentinetha2@yahoo.com  For more news, books, workshops, to donate and sign up for MNN newsletters, go to www.mohawknationnews.com  More stories at MNN Archives.  Address:  Box 991, Kahnawake [Quebec, Canada] J0L 1B0
at March 28, 2013 1 comment: 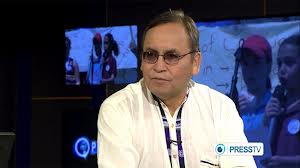 Roseau River Anishinabe
Censored News
http://www.bsnorrell.blogspot.com
Brenda Norrell
My last email to you which you posted contained some of the following
Your posting of the Native leaders from US and Canada joining forces in opposing the Transcanada pipeline is good but Native Americans and First Nations people must understand how deceptive and manipulating the oil companies and Governments are.
An article out of the UK contains the following paragraphs
BP (British Petroleum) was concerned that if Washington allowed TotalFinaElf's existing contact with Saddam Hussein to stand after the invasion it would make the French conglomerate the world's leading oil company. BP told the Government it was willing to take "big risks" to get a share of the Iraqi reserves, the second largest in the world.

Over 1,000 documents were obtained under Freedom of Information over five years by the oil campaigner Greg Muttitt. They reveal that at least five meetings were held between civil servants, ministers and BP and Shell in late 2002.

The 20-year contracts signed in the wake of the invasion were the largest in the history of the oil industry. They covered half of Iraq's reserves – 60 billion barrels of oil, bought up by companies such as BP and CNPC (China National Petroleum Company), whose joint consortium alone stands to make £403m ($658m) profit per year from the Rumaila field in southern Iraq.

When President Obama was in Israel last week talking about bombing Iran, Israel's Benjamin Netanyahu was spouting the same lies as when the second war against Iraq was being pushed, "weapons of mass destruction".
Economic Sanctions are used to soften up the country for war.
Thank you Brenda for posting the email I sent you. Now I am sending you an article written by Dahr Jamail, who is in Iraq.