MNN. Apr 17, 2013. “False flag” is a covert military operation designed to impose extreme fear amongst the population so it appears they are being attacked by other entities, groups or nations. In naval warfare a flag was put upon the ship, hence the name false flag operation. In the recent past all major wars have been started with false flags [eg. WWI, WWII, Vietnam, Iraq, etc.]

Americans: “Mohawks always know what to do!”
The first modern false flag was the American Revolution. Coincidentally, it started in 1775 in Boston Habor when the Free Masons dressed up like Mohawks, boarded a British ship and emptied all of the tea into the harbor. They stated they would rather throw the tea away than pay the king’s tax. They pretended to be Mohawks so as not to pay the taxes. Nothing changes!

Both George Washington and the British commander Cornwallis met and planned the subsequent skirmishes in the Masonic Lodges throughout the colonies. In 1775 from that incident at Boston Harbor known as the “Boston Tea Party” George Washington and his ragtag army began the first major skirmish called the “Battle of Bunker Hill” on the north side of Boston Harbor. 2,400 British troops drove out 1,500 Americans.
There were skirmishes between 1776 and 1778. In 1779 the true reason for the American Revolution was revealed. Maj. Gen. John Sullivan marched through Seneca and Cayuga country to the capital of the Iroquois Confederacy at Onondaga with 12,800 heavily armed men. They chopped down the Tree of Peace and tried to put out the fire that symbolized the peace. The real reason was to turn the law of the land, our constitution of peace, into the “law of war’ US Constitution.

Washington:” Cornwallis, the Iroquois know we are workng together”.
The British parked their ships at Quebec City while the Americans did their dirty deed for them.
The law of peace tied all the Indigenous nations across Great Turtle Island together. Soon the Mohawk, with all the other Indigenous nation on Onowaregeh, will fulfill our destiny by standing up the tree of peace and eliminate the war problem. As Bruce Springsteen penned on how a population is deceived “blinded by the light, cut loose like a deuce, another runner in the night. Blinded by the Light”.
MNN kahentinetha2@yahoo.com   thahoketoteh@hotmail.com For more news, books, workshops, to donate and sign up for MNN newsletters, go to www.mohawknationnews.com  More stories at MNN Archives.  Address:  Box 991, Kahnawake [Quebec, Canada] J0L 1B0

Tree of Peace will be stood up soon by us, for all people of Great Turtle Island. 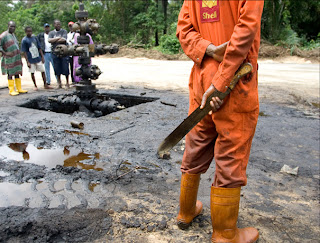 The suit against Shell was brought by Nigerian citizens who allege the corporation aided and abetted the military dictatorship in the torture, rape, and extrajudicial killing of unarmed protesters in the 1990s.
By Earth Rights International and
Center for Justice and Accountability
Censored News
April 17, 2013, Washington, D.C. — The U.S. Supreme Court today issued a disappointing decision in Kiobel v. Royal Dutch Petroleum (Shell), holding that the Alien Tort Statute (ATS) does not provide an avenue for justice for Nigerian human rights victims who were harmed when Shell Oil assisted the Nigerian government in attacking them and their family members.  Despite this, the splintered opinions by Justices Kennedy, Alito, and Thomas leave open the possibility that companies and individuals may still be liable for their abuses in cases with a stronger connection to the United States.

WHO: Representatives of the Indigenous Lakota Sioux Nation from Pine Ridge Reservation, members of the Lakota Truth Tour, and DC supporters.

WHAT: Press conference detailing Official Genocide Complaint against the U.S. Government and next steps of history making, international movement to end ongoing genocidal policies and practices. An action will also be taken relating to the Cobell lawsuit settlement.

WHERE: White House at Lafayette Park

MORE: The Indigenous Lakota Oyate (Nation) is a sovereign Indigenous First Nation of the Northern Great Plains that is on the verge of extinction because of ongoing policies of the United States Government and state governments. Less than 6000-8000 language speakers and culture holders remain – most as freedom fighters for their people. On April 1st, a Lakota delegation began the Truth Tour to raise awareness and build support for ending this genocide within the International Community.

Following two days of Truth Tour activities in Washington DC, on Wednesday April 17th, an Official Complaint of Genocide was delivered to the United States Department of Justice with a promise to also notify the State Department. While the Lakota await an official response from the U.S. Government, they are pursuing all avenues to get accountability within the International Community.

The Rapid City Journal, and bordertown newspapers across the US, continue to agitate hate crimes 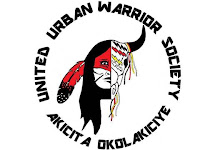 The Warrior Society's  resolution points out what is happening in many newspapers across the country, especially with bordertown newspapers, where the media has become a tool in the ongoing genocide and white supremacy in the United States, fueling hate crimes and injustice.

Racists and white supremacists are using the comment section on articles about Native Americans to attack Native Americans with hatred, agitate crisis, provide misinformation, and in some cases even provide personal information to target and endanger the lives of specific Native Americans.The comments at many newspapers are not monitored.

The comment section, however, is not the only problem at bordertown newspapers like the Rapid City Journal in South Dakota and Arizona Daily Sun in Flagstaff, Arizona. An examination of the content and history of these newspapers will show an anti-Indian focus, including presenting Native Americans as criminals, giving priority to non-Indians in conflict situations, and reporters failing to show up and be present, on the most important stories.

In many cases, the editorial stance of the media is one of white supremacy over Native American rights.

The Arizona Daily Sun deserves a place in the Hall of Shame for failing to adequately cover the lock-downs and marches to protect sacred San Francisco Peaks. Instead, the newspaper gave priority to the out-of-town, non-Indian business owner, of Arizona Snowbowl.

Rapid City Journal has a history of quoting the police first. In this way, the newspaper allows police to instantly become the judge and jury. As an example of how newspapers in bordertowns perpetuate the beatings, murders and hate crimes targeting Native Americans, the Farmington Daily Times changed the facts in this reporter's article when Navajos were beaten by white teenagers with baseball bats in the early 1990s. The newspaper was sold after a complaint was made to the US Civil Rights Commission.

Now in Arizona, the media, including Arizona Daily Star and AP, gives priority to the coal-fired power industry and non-Indian water rights, over the rights of Native people. This includes the Navajo Generating Station, Salt River Project and the theft of water in the so-called "Indian water rights settlements." At the same time, the Arizona media focuses on American Indians as criminals, or relies on frivolous and distracting articles.

In North Dakota, the media largely ignores the genocidal oil and gas industry on Indian lands. Nationwide, the oil, gas and fracking industry is given priority over the voices of those struggling to save their land and communities. Throughout the country, the media promotes the concept of toxic dumping and nuclear waste storage on Indian lands, and promotes the "not in my backyard" approach for non-Indians, while ignoring life-threatening dumping on Indian lands.

The articles are easy to analyze. Simply examine who is quoted first and given the priority in the article. Also, examine how much space, and how far up in the article, are the quotes of Native Americans. Then, there is a determination of the facts, fairness and accuracy. An anti-Indian perspective is easy to spot as well.

There is always the question of whether the reporter was present to determine the facts, or is relying on rumor, plagiarism, or a quick phone calls. If the reporter was not present, then there is no guarantee of the facts in the article. In most cases, Indian Country Today does not have a reporter present and uses plagiarism, rewrites of others hard work, or brief phone calls.

Armchair journalists, plagiarizers, and copy-and-paste journalists promote injustice when they fail to uphold the ethics of journalism due to laziness, and then cover it up with deception to receive a paycheck.

The Warrior Society said, "If we are going to move forward as a community and heal the historical wounds, caused by animosities and hate, we will need this paper to step up and lead us out of this circle of hate and stop tearing this ugly scab off our community for the sake of just news and selling a paper."


"A Mother's Letter to TransCanada & Big Oil" from Phyllis Cole-Dai on Vimeo.

Fast for the Earth co-founder Phyllis Cole-Dai http://www.phylliscoledai.com/  has just released "A Mother's Letter to TransCanada & Big Oil" <https://vimeo.com/64122215 a video inspired by a conversation with her 10-year-old son about the  Keystone XL pipeline and tar sands mining. 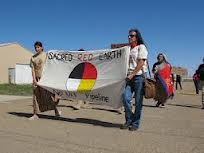 Cole-Dai is selling the video's sound track  (her solo-piano single, "Circling") through a variety of digital  musical outlets. Every penny earned will be donated to Keystone XL  pipeline and tar sands resistance, with a special focus on native efforts such as Protect the Sacred and Owe Aku (“Bring Back the Way”).

Buy "Circling" for 99₵ at CD Baby http://www.cdbaby.com/cd/phylliscoledai2/Circling and you'll donate 90₵ to the resistance. Visit the link, scroll down to track  #10 on the album playlist, then click to buy.

Please check out the video, then consider buying this single-piano tune to support Mother Earth. Every dollar helps!
at April 17, 2013 No comments:

The Editorial Staff of Red Ink Magazine, the oldest Native run student publication in the nation, devised to celebrate and amplify Native voices and Indigenous issues is proud to announce the release of the latest volume.
Red Ink Vol 16.2/ 17.1 (Double Issue) will be hot off the presses in the coming week. Established in 1989 at the University of Arizona,Red Ink has published the creative writing, scholarly research, art and photography of well-known and up-and-coming individuals throughout the Americas. The work of noted writers like Vine Deloria Jr., RigobertaMenchu, Lora Tohe, Sherwin Bitsui, Simon Ortiz and a host of others has graced the historical pages of the magazine.
“It is an energizing time.  The magazine is definitely on an exciting new path,” says Joe Quintana, the current editor in chief of Red Ink. “We are not only back on track, we’re ready to soar into a new era.”
In recent months the publication has faced numerous challenges including a major move, but with the dedication of a relentless staff it proves to be a twenty-two year old winner that refuses to succumb to the challenges of tough social and financial challenges.
“We are proud of the end product for this issue which is packed with some of the best literary and visual artistry in Indian country,” comments Sheila Rocha, Red Ink Publicist.  Some of those names include award winning cover artist Donel Keeler, Santee and national acclaimed painter Gerald Cournoyer, Oglala Lakota.  The literary work of Joy Harjo,Muskogee and environmental essay writing of Debra White Plume, Oglala Lakota “magnify the fervor of the creative spirit that refuses to be silenced,” says Rocha.
A release party to celebrate the new edition is in the planning stages in Tucson, Arizona.
In addition, the latest issue of Red Ink is available on-line at Lulu http://www.lulu.com/shop/red-ink/red-ink-vol-162171/ebook/product-20956749.html;jsessionid=3850FAFEBA6F40C6CD1B9C0AE5C87771