Indigenous Liberation and The Grounds of Decolonization: A Symposium to Honor the life and work of scholar and activist JOHN REDHOUSE. The speakers are Nichole Horseherder, Roxanne Dunbar-Ortiz, Kay Matthews, Klee Benally, and Laura Harjo.

John was born and raised in Farmington, New Mexico and is a graduate of the University of New Mexico, where he was a student leader and active member of the Kiva Club. He is a longtime Indian rights activist, who co-founded Indians Against Exploitation in Gallup, N.M. from 1972-73 and the Coalition for Navajo Liberation in Farmington, N.M. in 1974. He served as the Associate Director of the National Indian Youth Council in Albuquerque, N.M. from 1974 to 1978 and the New Mexico State Advisory Committee to the United States Civil Rights Commission in 1978-79. He has been also a prolific writer and scholar and his remarkable personal archives are now held at the UNM Center for Southwest Research.--From La Jicarita

Thanks to Occupy New Mexico for sharing these videos on YouTube!
at May 14, 2013 No comments: 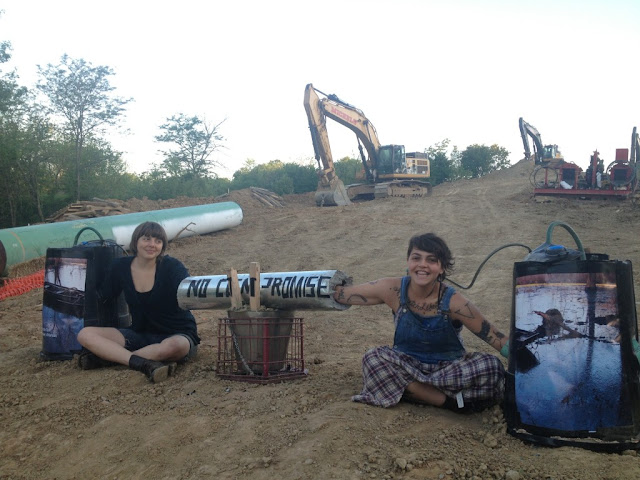 Hughes County, OK, May 14th, 2013
Early this morning Bailey and Holly, both of whom are local Oklahomans and with Cross Timbers Earth First!, walked onto a Keystone XL active construction site in Hughes County, Oklahoma and locked themselves to concrete filled barrels obstructing the use of heavy machinery used in the construction of the pipeline.
Bailey and Holly are part of Cross Timbers Earth First! , a regional chapter of the Earth First! movement, which has been carrying out ecological direct actions for over 30 years.  According to its members, Cross Timbers Earth First! also endorses Great Plains Tar Sands Resistance, a growing coalition of groups and individuals dedicated to stopping the expansion of tar sands infrastructure throughout the Great Plains. Read breaking news coverage:
http://gptarsandsresistance.org/
at May 14, 2013 No comments: