Red Nations shut down US 'consultation' on tarsands in South Dakota 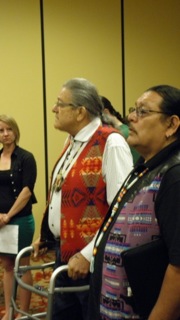 RAPID CITY -- This morning at 9:00 a.m. the United States Department of State attempted to hold what they call a consultation with tribal representatives of the Great Plains Red Nations regarding the effects of the Keystone XL Pipeline on sacred sites.  However, tribal, traditional and community members from the Lakota, Dakota, Nakota, Nez Perce, Ponca, and Pawnee demonstrated unprecedented unity and declared that our people would not participate in what was designed to appear to be a negotiation with Red Nations . 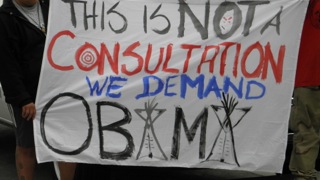 Oglala Sioux Tribal President Bryan Brewer made a statement dismissing the gathering as a sham because no leadership of the United States was present.  Instead Obama’s administration sent low level clerks to meet with our tribal and treaty leaders.
This disrespect to the provisions of the 1868 Ft. Laramie Treaty between the Lakota, Arapahoe, Cheyenne and the United States, as well as violations to international law and the Declaration on the Rights of Indigenous Peoples, will not be tolerated.
We will not negotiate about our sacred sites or any assault on Unci Maca (Mother Earth) or Mni Wicozani (Through Water There is Life).  As tribal officials left the room the grassroots people of Owe Aku’s Moccasins on the Ground began to chant “Sacred Sites, Worth the Fight, Territory by Treaty Right” until the U.S. functionaries were forced to shut down the meeting. 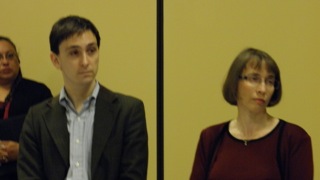 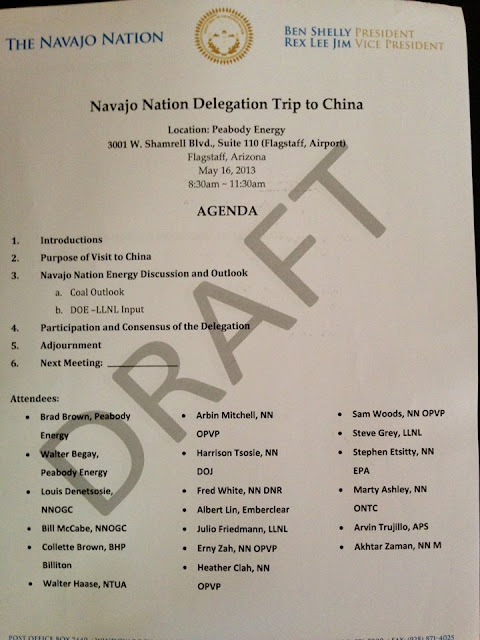 Peabody Energy and the Navajo Nation are planning a trip to China to sell Navajo coal! The meeting is today in Flagstaff.

News reporter Kathy Helms, Gallup Independent, exposes the Navajo Nation's secret agenda with Peabody Coal and China, and rebooting the dirty coal Desert Rock plan on Navajoland in New Mexico. The article also exposes the real agenda of Lawrence Livermore Labs, which has been hanging around Navajoland for decades pretending to do good, when its real agenda was obvious. There's no such thing as clean coal energy, and there's no way to trust anything from Peabody Coal. The dirty energy companies plan to keep raping and destroying Mother Earth by sticking the word 'Green' on their crimes, and corrupt tribal politicians are always up for the freebies and backdoor deals. -- Censored News
Read the article in the print edition of Gallup Independent, May 16, 2013
Excerpt:
Navajo President Ben "Shelly and Livermore’s Ronald Cochran signed a memorandum of understanding Feb. 1, 2012, 'initiating a gateway for future development of Navajo energy,' with the lab helping Navajo complete a comprehensive energy assessment of its resources.
Return of Desert Rock
"When the air permit for the coal-fired Desert Rock Power Plant near Burnham was remanded and the project was axed, the plan was to take another look at natural gas or other clean coal technologies, Woods said, one of those being carbon sequestration and storage.
"So they planned a trip to China to look at the GreenGen facility 'because Peabody is actually a stakeholder in that project ... and also talk to their engineers and their scientists and their researchers. President Shelly has been saying that we want to start Desert Rock, and that was the whole reason for this trip back in 2011,' Woods said. But with much of their time consumed by Navajo Generating Station lease discussions and BHP Billiton Navajo Mine negotiations, the Desert Rock/sequestration joint-venture projects by the Navajo Nation and Sithe Global fell by the wayside. With some of those activities winding down, Woods said they are resuming talks ..."
at May 16, 2013 1 comment:


MNN. May 16, 2013. A Washington DC Think Tank advisor on programs and policies from Harvard’s Kennedy School of Government found that Hispanics, meaning Indigenous People, have a low IQ. He doubts we will ever reach IQ parity with whites. This is a “trial balloon” to get a reaction. He resigned. The government will find some other way to promote this lie. We all know this is not true. This is meant to stream us into vocational, low level menial jobs and low expectations so as to fit us in with the new world order programming.