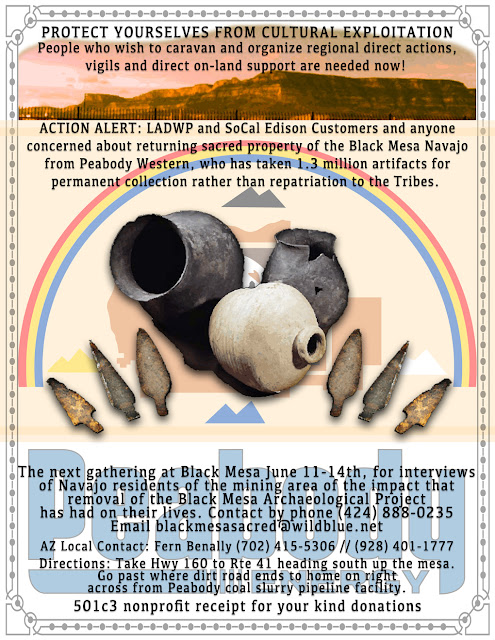 MNN. May 28, 2013. More trouble brewing for the thugs of the Corporation of Canada. What happens when the CEO, officers and accomplices become openly evil? Ghost Busters can’t help? These fearful dictators are flanked by bodyguards. Despotism is called “democracy”. They donate Indigenous land and possessions to fellow foreigners in exchange for paper immortality and off-shore bank accounts. Laws are made to protect them.

Bankers: “Harper, you idiot! We’ve been exposed!”
These pall-bearer politicians tell their followers to wave flags to celebrate their loss of freedom. Questioners are threatened with arrest and torture. They are treated like idiots and criminals. Who voted these politicians in? The dearly departed? Many say they never voted for them.
“Out to Lunch” signs go up to evade public discussions. They talk out of two sides of their mouths while their eyes roam elsewhere.
The public is being treated like Indians! The politicians’ salaries double or triple while education, health and welfare benefits are cut. That’s how our ever-growing $120 trillion Indian Trust Fund got stolen. Remember, these invaders and their followers all came to Great Turtle Island with nothing! They have nothing they can take when they leave!

While these weakened dons and their henchmen sharpen their knives, honest civil servants join the unemployment lines.
Deranged power operates on a gut level. To protect ourselves: As an anti-terrorist, carry an eagle feather, tobacco and sweet grass to stop assaults. Wear Indigenous clothing whenever possible. Never sign anything that compromises our heritage. Give thanks to Mother Earth daily. Put a leaning stick inside our doors to bring peace and harmony to our households. Only the traditionally condoled are “chiefs”. The tribal and band council ones are corporate garbage Injuns. These punks think treason turns them into hunks. They are ruptured rodents who will answer to the law of the land.

Porter: “Hey, Stevie, do you really want me back?”
Another corpulent crony of Prime Minister Harper has been caught in Panama. Dr. Arthur Porter diagnosed himself with inoperable cancer, was treating himself and could not return to Canada. Now he is returning in handcuffs. He allegedly stole over $22.5 million of Canadian taxpayers’ money from the SNC Lavalin construction of Montreal’s mega hospital. Harper had previously appointed him as his oversight head of corruption at CSIS, Canada Security and Intelligence Services.
Always follow the money. Remind colonial legal systems we are a sovereign Indigenous nation. Do not fear these noisy infestants. Clean water wards off money-hungry, greedy political idolaters. They can be fought with real history and the law of Great Turtle Island, Kaia’nereh:kowa. Remind them of their weaknesses and greed. Watch out! They might get so mad they may release their pagan gods, their law enforcement goons.

The medicines and our minds will oust them and set us free. Nothing less! Wish them the worst. May we never hear the words from their tongues again. May all their bank accounts go from “mega-bucks” to “nega-bucks”. As Michael Jackson sings in “Thriller“: “Cause this is thriller, Thriller at night. And no one’s gonna save you, From the beast about to strike.” 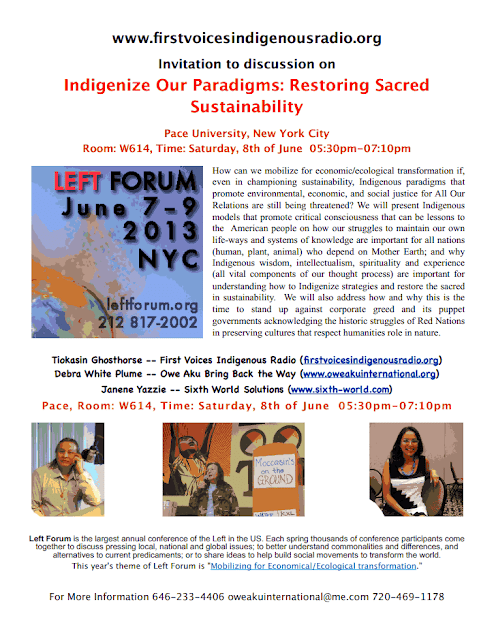 Debra White Plume of Owe Aku (Bring Back the Way) will be speaking at the Left Forum in New York City along with Tiokasin Ghosthorse and Janene Yazzie on SATURDAY JUNE 8TH from 5:30 pm to 7:00 p.m. at PACE UNIVERSITY - RM2614.

See our announcement in this email or at
http://www.oweakuinternational.org/owe-aku-moccasins-on-the.html

Online registration is at http://www.leftforum.org/civicrm/event/register?id=677&reset=1

Fee is $20 for a one day pass for low income folk but just so you know none of the collected money from the Left Forum goes to the organizations hosting this event.  If you would like to contribute to Owe Aku's work please visit www.oweakuinternational.org and feel free to donate whatever amount you are comfortable with.  Our on-the-ground work to support an Indigenous paradigm through the protection of Mni Wakan (Sacred Water) and Ina Maka (Mother Earth) currently involves, amongst other things, blockade training to stop the Keystone XL Pipeline.