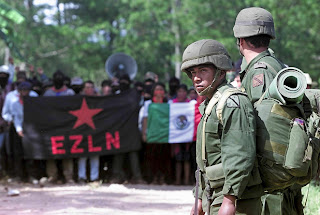 By Jimmy Johnson and Linda Quiquivix • May 31, 2013
Shared from Intercontinental Cry Magazine


Excerpt:
Trained by Israel
According to declassified Defense Intelligence Agency documents [PDF] obtained via a freedom of information request, Israeli personnel were discreetly sent into Chiapas in response to the 1994 Zapatista uprising for the purpose of “providing training to Mexican military and police forces.”
The Mexican government also made use of the Arava aircraft to deploy its Airborne Special Forces Group (Grupo Aeromóvil de Fuerzas Especiales, or GAFE). GAFE commandos were themselves trained by Israel and the US. Several would later desert the GAFE and go on to create “Los Zetas,” currently Mexico’s most powerful and violent drug cartel (“Los Zetas and Mexico’s Transnational Drug War,” World Politics Review, 25 December 2009).
Mexico was surprised by the Zapatistas, who rose up the day the North American Free Trade Agreement went into effect. The Mexican government found itself needing to respond to the dictates of foreign investors, as a famously-leaked Chase-Manhattan Bank memo revealed: “While Chiapas, in our opinion, does not pose a fundamental threat to Mexican political stability, it is perceived to be so by many in the investment community. The government will need to eliminate the Zapatistas to demonstrate their effective control of the national territory and of security policy.”
READ ARTICLE:
http://intercontinentalcry.org/israel-mexico-military-cooperation-to-crush-zapatistas-liberation-movement-19560/
Linda Quiquivix is a critical geographer. She can be reached at www.quiqui.org.
Jimmy Johnson is an organizer in Detroit. He can be reached at johnson [dot] jimmy [at] gmail [dot] com.
at May 31, 2013 No comments:

By Liz Hill
Posted at Censored News
(WASHINGTON, D.C., May 30, 2013) – Radio host John Kane of “Let’s Talk Native...with John Kane” will be a featured speaker on a panel discussion about Native radio at the Left Forum 2013 “Mobilizing for Ecological/Economic Transformation” Conference on June 7-9 at Pace University (1 Pace Plaza) in New York City. The panel, titled “Native/Indigenous Radio in Turtle Island (North America),” will take place Saturday, June 8, from 3:40 to 5:20 p.m.

“Indigenous media is less about forums for ‘crying foul’ over perceived injustices and more about offering a clear and intelligent perspective that challenges the conventional views that enable injustices,” says Kane. “Our job is not to be the the first or the last word on any subject.”

The panel, which will be moderated by Tiokasin Ghosthorse, host and executive producer of “First Voices Indigenous Radio” at WBAI-FM in New York City, will include K. Kehaulani Kauanui, host and producer of “Indigenous Politics: From Native New England and Beyond,” WESU-FM, Middletown, Conn.

“It's on us to make sure the conversations are happening and to turn up the volume on them,” says Kane. “Native people are not served by the mainstream media and we are certainly not served by stoic or reverent silence.”

A unique phenomenon in the U.S. and the world, Left Forum convenes the largest annual conference of a broad spectrum of left and progressive intellectuals, activists, academics, organizations and the interested public. Conference participants come together to engage a wide range of critical perspectives on the world, to discuss differences, commonalities, and alternatives to current predicaments, and to share ideas for understanding and transforming the world. The conference is held each year in New York City. This year’s featured speakers include political theorist, activist and MIT professor of linguistics Noam Chomsky and Academy Award-winning filmmaker Oliver Stone. 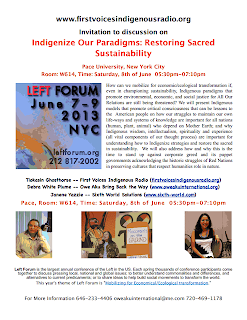 For more conference information and to register, visit www.leftforum.org.

# # # #
About John Kane
John Karhiio Kane is a Mohawk from Kahnawake. He lives on the Cattaraugus Territory of the Seneca Nation and has a direct connection to the people and territories of the Six Nations. Kane has been involved for most of his adult life in Native issues and, specifically, defending Native sovereignty. He was part of the First Nations Dialogue Team in the late 90s and worked extensively with the League of First Nations in battles with New York State over taxation.

Kane is a frequent guest and guest host of First Voices Indigenous Radio, which broadcasts from WBAI-FM (Pacifica) in New York City and has been a guest on The Nightwolf Show on WPFW-FM (Pacifica) in Washington, D.C., “The Martha Fast Horse Show” on KQRS-FM, KXXR-FM and WGVX-FM in Minneapolis, Minnesota, and “First Person Radio” with Laura Waterman Wittstock, on KFAI-FM in Minneapolis and St. Paul, Minnesota.

For three years, he has been host of "Let's Talk Native...with John Kane," which airs on WWKB-AM 1520 in Buffalo, New York and WQRS-FM 98.3 in Salamanca, New York. Kane’s strong voice on Native issues has earned him numerous invitations to appear on “The Capitol Pressroom with Susan Arbetter,” an influential public radio program that broadcasts from the New York State Capitol in Albany and airs in 20 markets throughout the state. Arbetter has also featured John on her television news segments (“The Capitol Report”) that air during local news throughout the state. Kane is a frequent guest on WGRZ Buffalo Channel 2's (NBC) “2 Sides with Kristy Mazurek”; he is called upon as an expert commentator on Native issues.

Kane and "Let's Talk Native..." have been featured in Buffalo Spree Magazine and the ARTVOICE and have earned mention in The New York Times, The Washington Post and The Wall Street Journal. He participated in the UN's International Day of the World's Indigenous Peoples program on August 9, 2012, in a program titled, "Indigenous Media: Empowering Indigenous Voices.” Kane's words to the assembly earned three rounds of applause and an unplanned reception line at the close of the program.

Kane takes pride in tackling the tough issues that face Native people and refuses to participate in the "buffalo speeches" that continue to dumb down Native culture and beliefs. He also writes the Native Pride blog, which can be found at www.letstalknativepride.blogspot.com. His radio shows and appearances are posted on the blog with articles, quotes and links. Kane also has a page on the WWKB website at www.kb1520.com and a "Let's Talk Native...with John Kane" group page on Facebook. Kane is not afraid to be labeled a warrior but prefers to be considered a conversationalist and a teacher.

MNN. May 30, 2013. Corporation of Canada Member, Rob Clarke, is trying to pass a corporate by-law to change the Indian Act. With the stroke of a pen Indians will be no more.

Rob Clarke: “Gonna wipe out dem Injuns with one swipe”.
The foreign corporation called “Canada” was created by the Law of the Seas. This company has been illegally placed on Great Turtle Island. It made a by-law called the “Indian Act” to rob and kill off the Indians and make it appear legal. Now Her Majesty’s subject from Saskatchewan, Rob Clarke, is changing this by-law to try to kill the survivors of the genocide. The desperate bankers need our ever growing $130 trillion Indian Trust Fund for war!

Clarke said he consulted all 633 of their corporate injuns that control the Indigenous control grid. He asked, “Can we keep on raping your people and your land? We promise to make you rich. It’s better than nothing!” They said, “Sure!”
While everybody is being distracted by the corruption scandals in Ottawa and Toronto, Prime Minister Harper is getting his henchman to push through this WMD by-law. Harper said, “Clarke, get this through. I don’t care who you bribe. It’s all from the Indian Trust Fund anyway.”
Clarke says, “The original by-law is working against the corporation. It lets a few big mouths complain and make life complicated for us. This one will shut them up as we will take everything from them, their identity, lands and resources. Hee-haw! We finally get away with the genocide.”

The Senate: “Ya-hoo! They’ll be bribing for our votes!”
“We just have to read it one more time and okay it. Then, bingo, the senate rubberstamps it. Then the Indigenous people are no more. It’s all ours. As simple as that. Hee-haw!”
Clarke says he’s worried about our Indigenous economy. Then they should leave our tobacco business alone. Our economy will greatly improve if you liars and crooks went back to where you came from. Otherwise you are all going to that big jail near Attawapiskat for the rest of your lives. You’ll have to do your own laundry, try to grow food on poison ground and eat the garbage your fed to your victims in the Residential School Death Camps.

The world is onto Canada’s horribly bad act, and will be dealing directly with the true sovereigns soon. As Robbie Robertson sings; “In circles we gather Moonlight fires are kindled, Sending it back We just make it go back. Beating hearts, beating hearts
Come as one, come as one. This is Indian country, This is Indian country” Stomp Dance
WestCoastNativeNews
MNN Mohawk Nation News kahentinetha2@yahoo.com Thahoketoteh@hotmail.com For more news, books, workshops, to donate and sign up for MNN newsletters, go to www.mohawknationnews.com More stories at MNN Archives. Address: Box 991, Kahnawake [Quebec, Canada] J0L 1B0
at May 31, 2013 No comments: