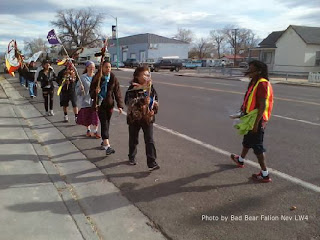 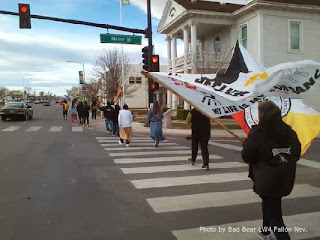 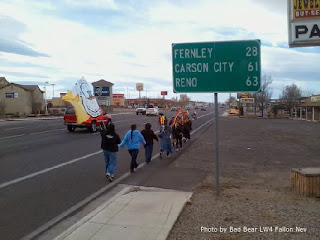 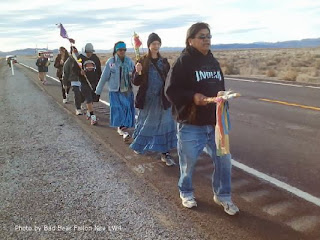 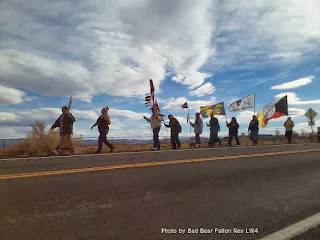 
Umatilla Tribal Elder at Speaks at Megaloads Protest, Umatilla, OR from Trip Jennings on Vimeo. 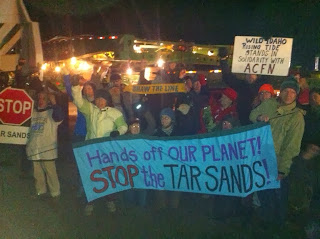 The equipment, a 901,000 lb. water purifier 22 feet wide, 18 feet tall and 376 feet in length. It had planned to leave the Port of Umatilla, head south on 395, then east on 26 on Sunday night. This route would pass through Umatilla Warm Springs Tribal Lands, and Tribal Members and Elders had a strong presence at the demonstration. 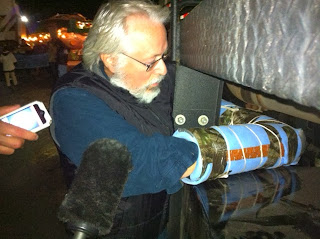 This week’s protest was larger than a similar protest last week as news of the shipment has spread throughout the region. An estimated 70 people greeted the megaload with signs and lockdown devices. Before it could depart, two participants locked themselves to the trucks. This was the first time this type of shipment have been blockaded in this way. This is the first of three megaloads the Hillsboro, OR based shipping company Omega Morgan has scheduled to move through the region in December and January. Similar loads sparked major protests moving through Idaho and Montana including a blockade by the Nez Pierce tribe in August.

Groups organizing the protest, including chapters of Rising Tide and 350.org, oppose the shipments due to the end use of the equipment in the expansion of the Alberta tar sands. This expansion would supply oil for the controversial Keystone XL and other pipelines. Many have called the tar sands most destructive industrial project on earth. Umatilla Tribal Member Shana Radford said, “We have responsibility for what happens on our lands, but there are no boundaries for air, the carbon dioxide this equipment would create affects us all. The Nez Pierce tribe said no to megaloads, and so should we.”
The Confederated Tribes of the Umatilla Indian Reservation (CTUIR) oppose the shipments due to the lack of consultation about the project headed through their ceded territory as required by law. 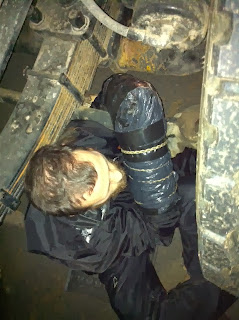 Warm Springs tribal member Kayla Godowa said, “It’s our duty to protect the native salmon runs in this area. They want to make this a permanent heavy haul route without even consulting our tribes. Loads like this are unprecedented here. What if a bridge collapses? And what about the impact to native communities being destroyed by the tar sands where this equipment will end up? We can’t just look the other way while native lands and the climate are being destroyed. We have to stand up.”
High resolution photos available at:

Photos may be used with attribution to Portland Rising Tide. 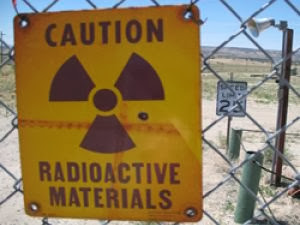 Live streaming video by Ustream
The Sacrifice Zone
Navajo Nation government and US EPA have failed to protect Dine' from strewn radioactive uranium tailings -- from the Four Corners region to western Navajoland -- in the same region where three coal-fired power plants poison the air, water and land

NAVAJO NATION -- The grassroots gathering at the International Uranium Film Festival on the Navajo Nation began this morning, with talks by Native Americans battling uranium mining in their homelands. The festival will also feature 21 films, many focused on the poisoning and disease of the Cold War uranium mining on Navajoland, known as a "sacrifice area" to the US.
Navajo President Ben Shelly spoke during the opening of the gathering, being held at the Navajo Nation  Museum, on Dec. 2 --4.
President Shelly said he is still "talking" with the US about cleaning up the Church Rock, N.M., uranium tailings spill that happened in 1979. Shelly said he is still "talking" about cleaning up the Tuba City dump site too.
The Church Rock spill poisoned the region of the Navajo Nation, and then flowed down the Rio Puerco toward Flagstaff, Arizona, poisoning more land and water and causing cancer and disease.
President Shelly, however, offered no guarantees that there would be no more uranium mining on the Navajo Nation. Speaking of the need for cleanup of the strewn radioactive tailings, Shelly said he told US officials that the US first must clean up the abandoned uranium tailings, then, Shelly added, "we might talk" about more uranium mining.

During the morning session, San Carlos Apache Wendsler Nosie began by speaking of his wife, Dine' from Cameron, Arizona. Nosie described how important women are to Apaches and how women are held in high regard in the family and community.
Nosie spoke of identity and about being who you are. Speaking of the struggle against the telescopes on sacred Mount Graham, he said when you challenge something that is bad, "they will come at you" with something greater.
Nosie spoke of the importance of working with the youths, and not getting pulled down by those who oppose you.
Nosie said the fight is over "if we lose our identity." Nosie spoke of the struggle to maintain identity, healing with the children, and the importance of giving back to Mother Earth.

Carletta Tilousi, Supai and Hopi, spoke on the protection of the natural resources and human life. Tilousi spoke on the importance of protecting the Supai homeland and Grand Canyon from uranium mining. She talked of the trade routes with Navajos, and how food has been grown in the region, as the people sustained themselves. She thanked Dine' medicine men for helping Supai with healing remedies.
The uranium mining has already been going on in the Grand Canyon region, which has resulted in cancer and death for Supai. Tilousi said the plants too in the Grand Canyon region have been poisoned, as can be seen in the yellow spots in the leaves.
"Those areas are not just sacred to the Havasupai, they are also sacred to the Navajo people," Tilousi said.
Duane 'Chili' Yazzie spoke on how the modern-day Navajo government is not the peoples own government, but one "imposed on us."
Jonathan Perry, Dine', Becenti Chapter Vice President, encouraged everyone to continue in the struggle to protect the water and life.

Petuuche Gilbert, Acoma Pueblo, Acoma Laguna Coalition for Safe Environment, spoke on the power of prayer to protect this sacred land. Petuuche spoke on the importance of the people advocating for no uranium mining. He said the struggle continues to persuade tribal councils to say 'No' to uranium mining, especially when tribal governments have that "carrot dangled" in front of them.
"It is up to us on how to protect our homeland," Petuuche said, pointing out the enormous amounts of water that mining companies are using.
He said there is now a 30 year lawsuit against Kerr McGee.
Further, there is currently a theft of Indian water rights underway in New Mexico.
"We have to work together," Petuuche said of the battle to prevent new uranium mining.
Nadine Padilla, Multicultural Alliance for a Safe Environment (MASE) coordinator, spoke of the importance of Native and non-Native groups working together, and revealing the unity and force strengthening them.

Photo above: Late Monday, row of tires burn for fracking blockade. Round dance as more RCMP arrive. Arrests today, including one brutal arrest of a woman. Twitter photo.

Native Voices United online radio
3 WOMEN HIT BY SWN, INJUNCTION EXTENDED, AND HIGHWAY 11 BURNS
https://www.facebook.com/NVURadio
DEC 2- Today along highway 11 things got rough. RCMP blocked off the road, arrests were made, there were reports of police dogs chasing people in the woods, and an SWN security vehicle hit 3 women. An ambulance was called and 2 women were sent to the hospital; meanwhile the RCMP did nothing.

In the court house, the Judge dismissed arguments made by Melissa Augustine of behalf of all Jane Does named in the injunction, as well as arguments of other defendants, calling them "opinions". SWN's injunction was thus extended until december 17. Protestors outside of the courthouse reacted by putting blue tape over their mouths and linking arms. Someone shouts that they will go join the protestors on the highway.

Footage emerges from the road of women being assaulted and arrested by RCMP. Soon after, highway 11 was set ablaze with flaming tires as protestors enacted their own permanent blockade. They now ask for support, people, and supplies. The burning tires have been called "smoke signals". 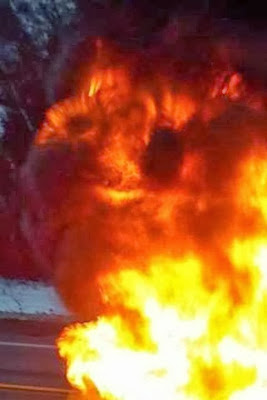 Elsipogtog message from blockade, photo above: "This is a grass warrior dancing in the fire on Hwy 11, our ancestors are with us." Photo courtesy of Tasha Sock 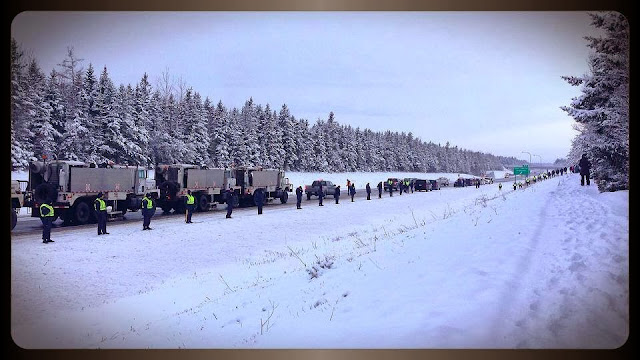