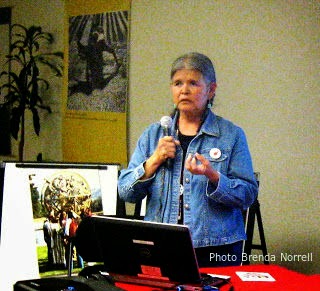 Whitehorse also described the abuse she suffered in boarding school, when she was punished for speaking her own Dine' language. Further, she was a victim of the United States government's forced sterilization program of American Indian women, carried out by the Indian Health Service in the 1970s.

Whitehorse said it is important to examine the content of children's books for the stereotypes of American Indians, including cartoons, mascots and images like headdresses and teepees.

Referring to stereotypes of Indians, she pointed out that each Indian Nation has their own language, traditions and culture and the people are teaching these to their own young children. During her presentation, she used as an illustration an inaccurate children's book that combined the specific traditions of Dine', Pueblo, and other Indian Nations as if they were all one in the same.

Whitehorse said she, like so many Native Americans, was punished for speaking her own Dine' language in boarding school. "If I talked in Navajo, I was punished."

She was taught to count with the stereotypical, "One little, two little, three little Indians ..." Today, she teaches her own great-granddaughter to count using this tune, but with the word "bilagaana" (white men) instead of "little Indians."

Today in the schools bias in children's books remains, including the words "squaw," and "papoose."

"We have come a long way," she said, pointing out that today many Navajos are lawyers, educators and doctors."

She said AIM West is about obtaining equal rights and "our voice being heard."

Whitehorse was sent here to the Bay Area at the age of 19 on relocation to Oakland. After four years, she decided it was time to go home to the Navajo Nation.

Whitehorse described how she was a victim of the United States government's forced sterilization of American Indian women in the 1970s. It was carried out by the Indian Health Service, and many times without the knowledge of Native American women.

"I was a victim of that after I had one daughter. I wish I had more children"

"There are a lot of Native American women out there who never had children because of this."

"Everything that the government put before me, I went over it. I just became stronger."

"Now I know who I am, I am teaching that to my daughter, my granddaughter and my great-granddaughter, because they are going to carry on the legends that we have as Native Americans."

Pointing out the stereotype of America's Thanksgiving, she said Americans need to learn the real history.

Watch videos of discussion sessions at Navajo Museum: http://www.ustream.tv/recorded/41369646
at December 04, 2013 No comments: