Earthcycles and Censored News will be live in San Francisco Friday, Saturday and Sunday
Schedule at www.aimwest.info
Share our link:
http://bsnorrell.blogspot.com/2014/11/aim-west-live-nov-21-23-2014.html 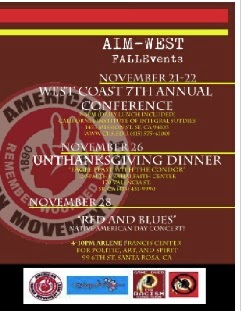 The 7th Annual AIM-WEST Coast Conference will be held at the California Institute for Integral Studies (CIIS), in San Francisco, on November 21-22, 2014.
The theme at this year’s Conference is “No Honor in Racism.”  The 7th annual conference will open with an introduction and prayer blessing followed by the “Sweet Medicine” women’s drum and song group, led by Mildred Wagner.

The purpose of the annual AIM west coast gathering is a multi-faceted opportunity allowing the inter-tribal nations and peoples to congregate and to share information relevant to their communities at local, regional, national and international levels.  It is an occasion to sharpen tactics and develop strategies in the struggle for social justice; to announce campaigns and issues of national significance, and to inspire the youth to know their history, to continue the struggle for self-determination, and to honor the Treaties, and Mother Earth. The Conference is intended to provide global news coverage by Brenda Norrell of Censored News, and by Govinda who will broadcast live-streaming both days at www.earthcycles.net

The two day conference will begin promptly at 9 am until 5 pm each day.  It will address topics with presentations on Friday, such as; Indian Child Welfare Act (ICWA), Prisoner Rights, and Leonard Peltier, Food Sovereignty/Security, Water, and Treaties.

A PRESS CONFERENCE is scheduled at CIIS on Saturday, November 22 at 11:15 am to bring attention to the upcoming National Football League (NFL) game between the SF 49ers against the Washington team on Sunday, November 23, at Levi Stadium, in Santa Clara. The press conference is intended to bring attention to how the Washington football team and its owner Dan Synder have used racism as a tactics intended to incite discrimination and perpetuate a racial slur disguised as entertainment, and the banner of tradition and honoring indians. The speakers before the press include Prof. Melinda Micco (Mills College), Dr. Jesse Johnson (Sacred Sites Protection and Rights of Indigenous Tribes), Jacqueline Keeler (MASCOTRY), Kris Longoria (Bay Area Coalition Against Racism in Sports), and Clyde Bellecourt (National Racism Against Racism in Sports and Media).  The press conference will be moderated by Bill Means.

During the lunch period on Saturday from 12 noon until 1 pm a film will be screened “In Whose Honor.”

A panel discussion, the "End of Peoples as Mascots in the 21st Century” and its implications, will be held from 1 to 4 pm.  The moderator will be Dr. Jose Cuellar, and known activists against racism in sports known in the bay area such as those who presented themselves during the press conference including Ms. Angel Heart, and Stanford student Dalton Brown.

The public is welcome to attend, and students and youth are encouraged to make every effort to attend.  Lunch will be provided both days.  Thank you all my relations. 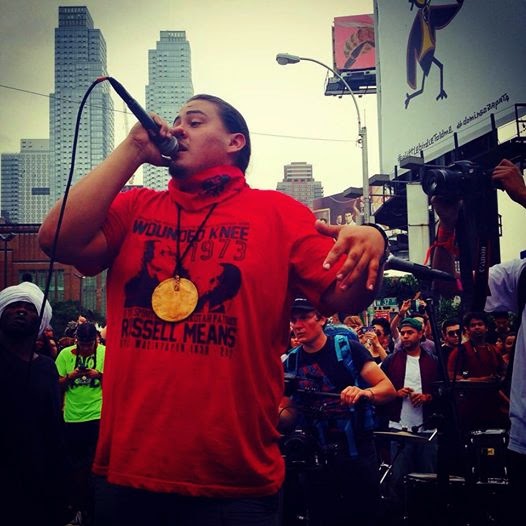 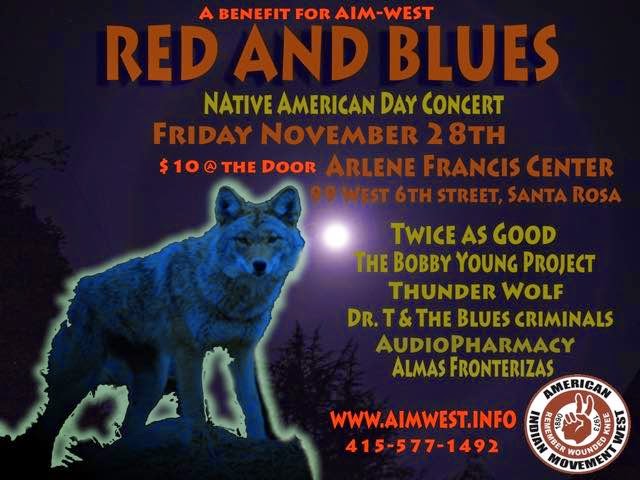 The Bay Area Coalition Against Racism in Sports is launching a Northern California grassroots campaign including a march and rally to end the use of the racial slur, name & mascot of the NFL team from Washington, D.C. when they play the San Francisco 49ers.

"Team Pride should NEVER outweigh my culture or identity, or that of my peers. It is time to end racist mascots!"- Dahkota Brown 16, Wilton Miwok

In celebration of our continued resilience and fight against racism and colonialism, we honor our culture and traditions with singing, drumming, and dancing. Traditional dress encouraged! Bring your hand drum and your poster/sign/banner!

*Ulistac is the Ohlone Village area near the stadium and means: uli a warrior and stac: place/land.

Change The Name: Protest Racism in Sports November 23rd, 2014 @ 10: 00 AM
by AIM West
What: Grassroots Indigenous Organizations to Hold March and Rally for Respectful Representation of Indigenous Peoples. The protest and news conference will coincide with the controversial Washington NFL team’s game versus San Francisco 49ers.
When: Sunday, November 23rd, 2014
8:00am - Prayer Gathering @ Ulistac Natural Area; 4901 Lick Mill Blvd, Santa Clara, CA
9:30 am - March to Levi’s Stadium; 4900 Marie P DeBartolo Way, Santa Clara, CA
10:00am - Rally @ Levi’s Stadium; 4900 Marie P DeBartolo Way, Santa Clara, CA
Where: Ulistac Natural Area-- Occupied Ohlone Territory*
Who: Sponsored by American Indian Movement-West, Bay Area Coalition Against Racism in Sports, Eradicating Offensive Native Mascotry, Indian People Organizing for Change, Sacred Sites Protection & Rights of Indigenous Tribes, ANSWER COALITION,Idle No More Bay Area CA, Black Berets Por La Justicia, and more TBA.
A Northern California grassroots campaign is being launched by the Bay Area Coalition Against Racism in Sports. A march and rally to end the use of the racial slur, name and mascot of the NFL team from Washington, D.C. comes to Santa Clara November 23rd at 10:00 AM, Levi’s Stadium. Grassroots community members & organizations will stand in solidarity to end the use of the racial slur as the mascot and name of the NFL team in Washington, D.C. November 23rd at 10:00 AM, Levi’s Stadium in Santa Clara, CA. The events will coincide with an NFL game at Levi's Stadium where the controversial Washington team will play against the San Francisco 49ers.
The campaign calls upon the NFL and Commissioner Roger Goodell to end the use of the racial epithet and its hurtful reminder to the Indigenous peoples of their ongoing mistreatment. The Bay Area Coalition Against Racism in Sports is organizing its largest grassroots demonstration in the San Francisco Bay Area, a continuation of many years of protesting racism in sports. Kris Longoria, co-organizer states, “The Bay Area has a large Native American Community, a lot of history for our people standing up for our rights, started here in the bay area. We are committed to our culture and traditions, but using our people as mascots is unacceptable. Let’s end this legacy of racism in sports.”
Eradicating Offensive Native Mascotry, a sponsor of the demonstrations, has issued a call for support of Native Americans, human rights activists, and others who believe Native Americans deserve the right to determine how our culture and identity is represented in media and who are concerned for the future of Native American youth. The California protests are part of a series of nationwide actions at NFL games to “Change the Name & Change the Mascot!” that have been held at the Washington team’s away games against the Cardinals, Cowboys, Vikings, and will occur at the Washington team’s home game on December 28th. Nicholet Deschine Parkhurst, Eradicating Offensive Native Mascotry member, was a coordinator of the kick-off rally against the Washington NFL team’s name at the October 12th Arizona Cardinals game. Deschine Parkhurst said, “Many grassroots groups and organizations seek to give voice to Native Americans who advocate for the Washington NFL team to change the team's name. San Francisco is a great backdrop to the November 23rd protest at the 49ers game because of the city’s historic ties to the Indigenous rights movement. The NFL leadership cannot continue to ignore our voice or the fact that Native American themed mascots harm Native American youth." Student Dahkota Brown 16, Wilton Miwok tribal member added, "Team Pride should NEVER outweigh my culture or identity, or that of my peers. It is time to end racist mascots!"
In celebration of our continued resilience and fight against racism and colonialism, we honor our culture and traditions with singing, drumming, and dancing. Traditional dress encouraged! Bring your hand drum and your poster/sign/banner!