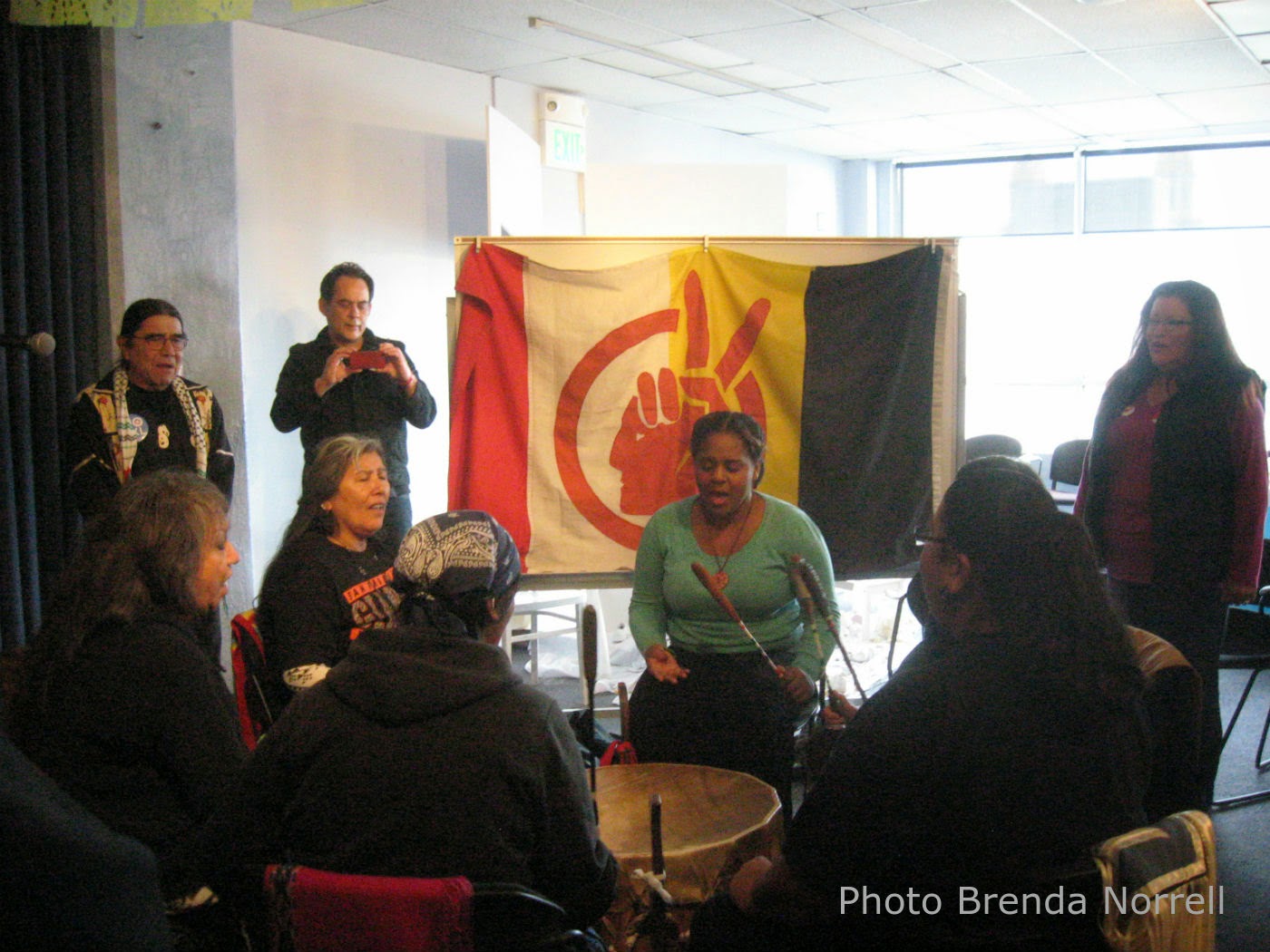 US Congressmen Michael Honda issued a statement of support for Native people protesting racist sports mascots and the Washington team, see below.
Jean Whitehorse, Dine', described the abuse by the United States in her younger years, in boarding schools and relocation to an urban area. The final assault was when she was sterilized without her knowledge by Indian Health Service after returning home to the Navajo Nation. Jean, present at the Occupation of Alcatraz, was one of many Native American women sterilized by the US government.
William Underbaggage, Lakota, spoke on the fight against the tarsands and the Keystone XL pipeline which is threatening the Ogallala Aquifer and the Lakota region's water supply. William created the Indigenous Nations Network, as an alternative to the current Indian country national news, which relies on plagiarism, deception, fraud and profiteering.
Lori Riddle, O'odham from Gila River in Arizona, told how she grew up on a Superfund site, and the sicknesses that her family suffered because of it. Today, Lori is fighting Loop 202 to protect the O'odham's sacred mountain and fighting against fracking. She described how the corn has become mutated from GMOs.
Wesley Elliott, Tuscarora, Iroquois Confederacy, spoke on the need for real action to halt the ongoing genocide against Native people. Wesley urged more support for the Winnemem Wintu and acknowledged the Ohlone, the first people on this land where we are.
Raquel Arthur, Paiute from Nevada, spoke on tribal and federal corruption, now threatening Paiute water rights to Pyramid Lake. She also spoke on the need to halt the Bear hunt, explaining that the Bear is sacred to the Paiutes. Raquel's father Webster Arthur, Nez Perce, said for Native people there were never any borders. Webster described how Native ancestors welcomed people to this land, and were slaughtered by the whites they welcomed.
Native Americans will protest racist sports mascots and the Washington Redskins at Levi Stadium in Santa Clara on Sunday.
The conference is free and open to the public at California College of Integral Studies, 1453 Mission St., San Francisco.
Read more from Day 1 and watch the videos at Censored News.
http://bsnorrell.blogspot.com/2014/11/live-aim-west-fri-nov-21-2014.html
Watch live today, Saturday, Nov. 22, 2014, with the livestream provided by Govinda at Earthcycles www.earthcycles.net
www.bsnorrell.blogspot.com brendanorrell@gmail.com
. To watch Friday's videos from AIM West, select a time block below and click on it:


Watch live streaming video from earthcycles at livestream.com
at November 21, 2014