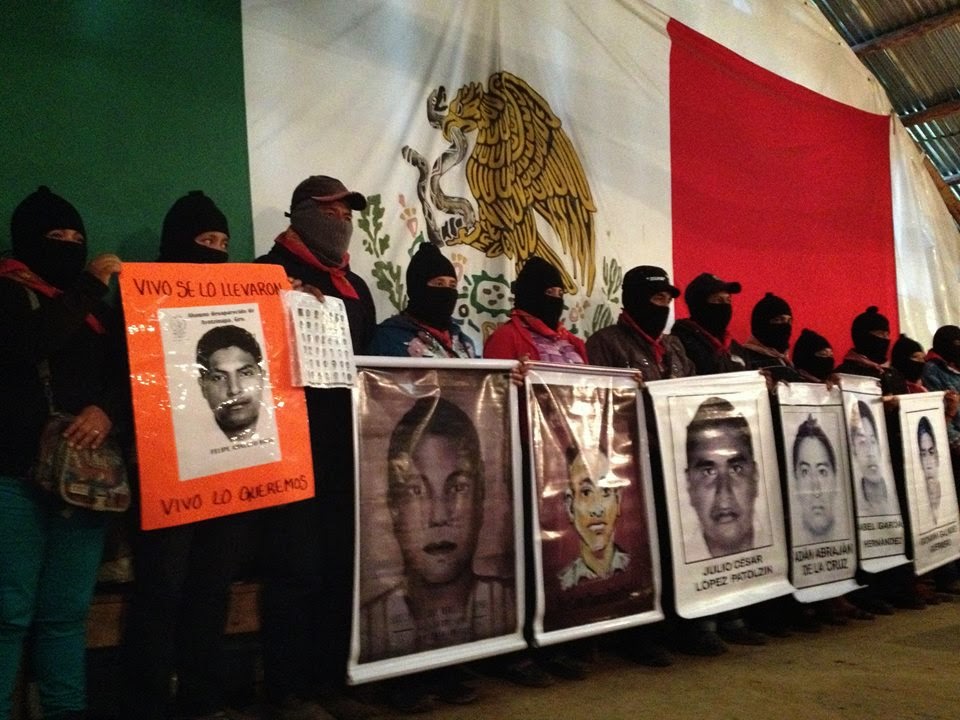 The Words of the General Command of the EZLN, presented by Subcomandante Insurgente Moisés, concluding the event with the caravan of the families of the disappeared and students of Ayotzinapa, in the caracol of Oventik, November 15, 2014.

Mothers, Fathers, and Family members of our murdered and disappeared brothers in Iguala, Guerrero:
Students of the Escuela Normal[1] “Raúl Isidro Burgos” in Ayotzinapa, Guerrero:
Brothers and Sisters:
We thank you with all our heart for sharing your word with us.
We know that in order to bring us your word directly, without intermediaries or outside interpretations, you had to travel many hours and endure fatigue, hunger, and exhaustion.
We also know that for you this sacrifice is part of the duty that you feel.
It is the duty to not abandon the compañeros disappeared by the bad governments, to not sell them out, to not forget them.

The Words of Comandante Tacho, at the opening of the EZLN Encounter with the Ayotzinapa Caravan, November 15, 2014

Fathers and mothers of the disappeared students from the Escuela Normal[1]”Raúl Isidro Burgos” in Ayotzinapa, state of Guerrero, Mexico.

To the students and to all of those accompanying this caravan, and everyone gathered here.

In the name of the boys, girls, young people, men, women, and elderly of the Zapatista Army for National Liberation, we welcome you to this Caracol of Oventik, Caracol II, Resistance and Rebellion for Humanity.

We the Zapatista Army for National Liberation want to hear your words of pain and rage, which we share.

We are not concerned with whether municipal presidencies are burning, nor with how many cars, doors, or palaces have been burnt.

What we want to hear is your pain, your rage, and the angst that comes from not knowing where your young students might be.

We also want to tell you that we Zapatisas have been accompanying you in the protests and mobilizations that have been held in Mexico and in the world. Though our acts of pain and rage do not appear in the paid media, we want you know that we have joined you with real and true actions.

If we had known a few days earlier that you were coming, there would have been many of us here to greet and listen to you, many more than are here now. You can’t imagine the number of people who would have come.

Those of us who serve as representatives here today receive you with all of our hearts to listen to your pain and your rage.

[1] The Escuelas Normales in Mexico are teaching colleges that principally train rural and indigenous young people to be teachers in their own communities.


The Words of Comandante Javier, welcoming the Ayotzinapa Caravan to the Caracol of Oventik, November 15, 2014

Brothers and sisters, parents of the 43 disappeared students, and Students and Teachers from the Escuela Normal[1]”Raúl Isidro Burgos” of Ayotzinapa, state of Guerrero:
A very good afternoon to everyone.
In the name of our thousands of compañero and compañera bases of support from the Zapatista Army for National Liberation, we warmly welcome you to this humble center Caracol II of Oventik, Resistance and Rebellion for Humanity, in the Highlands Zone of Chiapas, Mexico.
Those of us present here are representatives of our Zapatista communities, and we receive you with open arms in order to listen to your words.
Know that you are not alone! That your pain is our pain! That your rage is our dignified rage! And that with our actions we support the demand that the 43 students, disappeared by the bad governments’ criminal acts, be returned alive. May you feel at home here, because this place is home to all who struggle.
Thank you.
[1] The Escuelas Normales in Mexico are teaching colleges that principally train rural and indigenous young people to be teachers in their own communities.