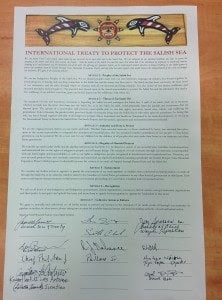 International Treaty to Protect the Salish Sea
COAST SALISH TERRITORY, NORTH VANCOUVER, BC; SEPTEMBER 21, 2014 – Today, First Nations from the lower mainland, Vancouver Island, and Washington State have come together to sign an historic treaty to protect the Salish Sea from tar sands oil and related threats, making the Kinder Morgan Trans Mountain Expansion Project illegal under Coast Salish Law.
The treaty prohibits the increased transport of tar sands products through the Salish Sea and specifically makes the Kinder Morgan Trans Mountain Expansion Project illegal in Coast Salish Law. The treaty contains a provision in which the signatories agree to take collective action, if necessary, to enforce the protection of the Salish Sea under Coast Salish, Canadian or International Law.
“By signing this treaty, we have agreed to mutually and collectively use all lawful means to stop this project”, said Rueben George, of Tsleil-Waututh Nation Sacred Trust Initiative. “”Kinder Morgan’s expansion project will never get built.””
Read article: http://twnsacredtrust.ca/coast-salish-nations-sign-international-treaty-to-protect-the-salish-sea/
Posted by Censored News, publisher Brenda Norrell at November 12, 2014