President Ben Shelly and Speaker Pro Tem LoRenzo Bates are demanding that the Hopi Tribe and the Bureau of Indian Affairs cooperate with a request issued by the Navajo-Hopi Land Commission Office to cease and desist from ongoing impoundment activities of livestock owned by Navajo residents in the Hopi Partitioned Lands.

In addition, Pro Tem Bates and President Shelly have issued an official request to Hopi Tribal Chairman Herman G. Honani for a meeting on Nov. 3 to discuss the ongoing livestock round-ups.
Numerous reports have surfaced from various HPL residents of ongoing livestock impoundments that have raised significant concerns for Navajo livestock owners in the area, several of whom have reported that authorities have brandished firearms during the livestock round-ups.

“Among many families, livestock is the main source of food,” said President Shelly. “Resolve is what we all want.”

“We have heard the concerns of our people, particularly those of elderly Navajos who rely heavily on their livestock for their livelihood,” stated Pro Tem Bates. “Impounding livestock of Navajo people is a deliberate violation of their rights to practice our culture and traditions and it must stop immediately.”

In an Oct. 24 memo from NHLCO executive director Raymond Maxx to Hopi Tribal chairman Herman Honanie, Maxx requested a ten-day grace period to allow for the opportunity to confer with residents to request removal of excess livestock from the HPL.

“If overgrazing is the major concern for Hopi officials, it is certainly an issue that we can address by sitting down and talking with one another,” added Pro Tem Bates.

NHLC members Council Delegates Dwight Witherspoon and Walter Phelps have met with Hopi and BIA officials and affected residents.
According to Delegate Witherspoon, further discussions between all parties are scheduled for this week. 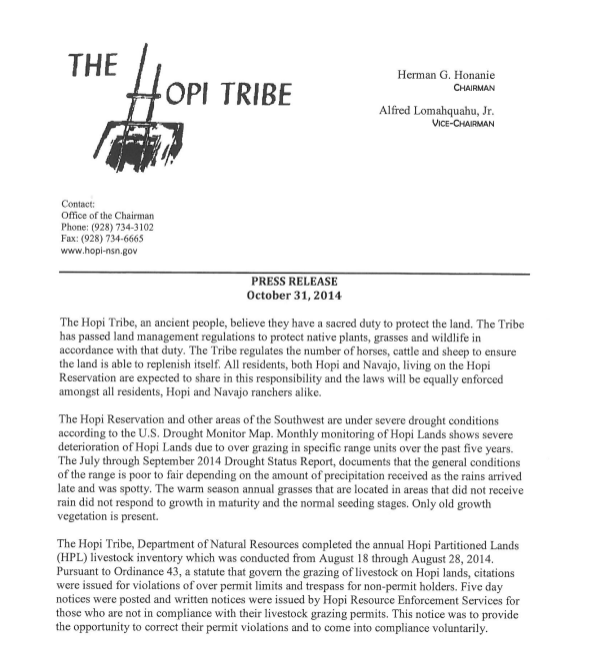 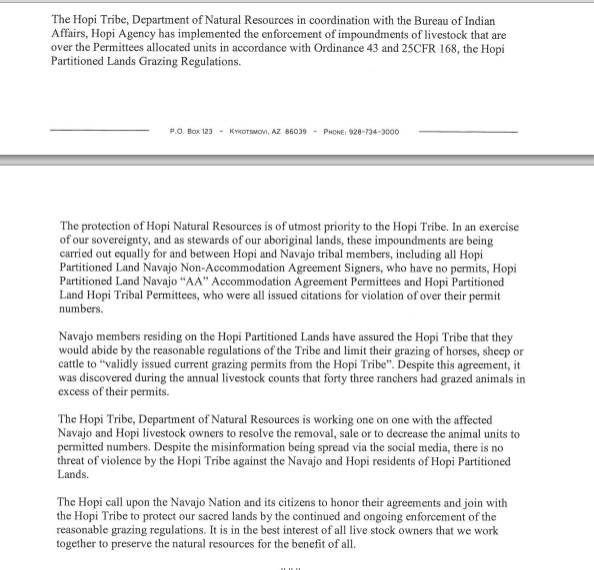 This kinda thing is getting out of hand maybe , some government officials need to check themselves . I think we the human race need to put a stop to gooberment over reach !!!!

The Rest of the world are supporting
the Hopi and Navajo Nation -
and all First Peoples and Elders, Indigenous
alike.

back to The People, not the
money, power, control, and heartlessness-
lovelessness throughout all central governments everywhere.

de-centralization is very key
these days - and that is the good news and beacon.


Emerge again Hopi and Navajo -
it is time :)

In Love and Freedom.