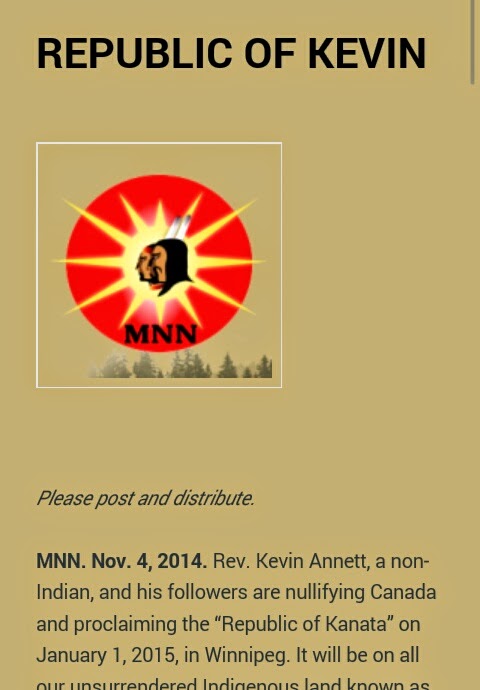 Please post and distribute.
MNN. Nov. 4, 2014. Rev. Kevin Annett, a non-Indian, and his followers are nullifying Canada and proclaiming the “Republic of Kanata” on January 1, 2015, in Winnipeg. It will be on all our unsurrendered Indigenous land known as “Canada”. The Iroquois Confederacy symbolism is being used without our permission, such as the Tree of Peace with the Eagle at the top and the roots spreading in the four directions. He is going to nationalize our land, restrict ownership to 160 acres each, establish a citizen’s militia, lower the voting age to 16 and abolish income tax.

Kaianerekowa: Wampum 45 provides that the Women are the progenitors of the Nation. They own the land and soil.
Rev. Annett did not ask us for permission to set up their new corporation or republic. He is recruiting settlers to join a new corporation or rogue state with a hierarchical corporate system. They do not plan to live by the law of the land, the Kaianerekowa, and the Guswentha.

Same old. Same old. Everyone’s going to get 160 acres of Indian land.
This could be another attempt to usurp Onowaregeh, Great Turtle Island. Only we are sovereign with all title and authority over Onowaregeh. Rev. Annett cannot legitimize himself by recruiting Indians to support his company to make it appear like he’s got Indigenous support. He can have authority only over those who give him their rights.  All traditional Indigenous nations in the Western Hemisphere adhere to the principles of the Great Peace. Those Indigenous who support him lose their claim to the land, Ongwehonweh name, clan and forfeit their birthright.
The Corporations of Canada and the US never resolved the issues of our land, which they know we can never give up. Hook and crook are the basis for their claims. Theft and murder have no statute of limitation in Kaianerekowa or Admiralty law.
A corporation has no authority beyond itself. It’s by-laws apply only to its employees. Onowaregeh is ours since time immemorial. We will protect our land and resources and stop another rogue state like this from continuing the genocide.

Jim Jones & his Rainbow Children.
Rev. Annett sounds like Rev. Jim Jones, with a different spin. Both want to set up their own country on native land. Stay away from Kevin’s Kool-Aid! We encourage everybody to chose right and follow the great law, Kaianerekowa, the supreme law of the land, based on the laws of nature.
As John Lennon says: “We all been playing those mind games forever/Some kinda druid dudes lifting the veil/Doing the mind guerrilla/Some call it magic, the search for the grail.. John Lennon. “Mind Games”.
MNN Mohawk Nation News kahentinetha2@yahoo.com For more news, books, workshops, to donate and sign up for MNN newsletters, go towww.mohawknationnews.com  More stories at MNN Archives.  Address:  Box 991, Kahnawake [Quebec, Canada] J0L thahoketoteh@hotmail.comfor original Mohawk music visit thahoketoteh.ws
Read: Kevin’s Republic of Kanata.
Watch video: Kevin did not consult the true Mohawks.
Canada is a rogue state. It is a party to this agreement, but never fulfilled its obligation to the international community. UN Declaration on Decolonization 1960.
at November 05, 2014

You know, sadly, I cannot help but chuckle a bit in support of your MNN commentary. First Nations wisdom, tradition and recall of history suffices to instruct and elegantly so on such matters, but so does citing Albert Einstein who warned that we cannot solve problems by using the same kind of thinking we used when we created them. In the case of Rev. Annett's proposal, that same kind of futile thinking should include - and I apologize for the lack of elegance - Jeffersonian populist pandering, shot-in-the-arm libertarian steroids, and jaded nation-state secessionist models. Future generations - First Nations and settler - deserve better. As do all our relations.