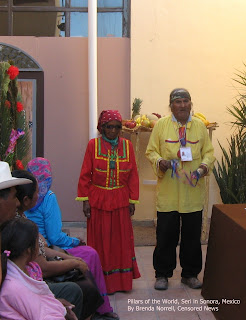 DESEMBOQUE, Sonora, Mexico -- Amalia Astorga, Comcaac (Seri) and upholder of traditions, passed to the Spirit World after a long life of living and sharing Comcaac culture and traditions on Seri land, on the coast in Sonora, in northwest Mexico.
Alejandro Aguilar Zeleny, a longtime friend of Amalia in Sonora, said, "Amalia passed away with Odile, that big storm, or cyclone. It is sad because the roads were closed. So she didn't have any doctor first and then later they could not bring a judge to provide a certificate of her death to bury her. So it was also sad and difficult."
"Adolfo is very sad and saying he is not going to sing anymore in any fiesta because she use  to dance with his singing. Some days ago also passed away Cleotilde Morales. Her husband Alfredo passed away in May." 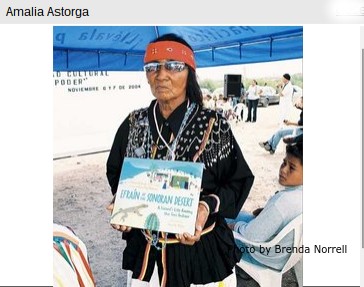 "So everybody is very sad because these old great people are no longer here."

Amalia Astorga is an internationally-renown herbalist of Seri and O'odham Indian descent. She and her husband, Adolfo Burgos, taught traditional songs and dances to the Seri children in Desemboque. In 1998, she was honored as a "Keeper of the Desert Treasure" by the Arizona-Sonora Desert Museum for passing on to younger generations the herbal knowledge, as well as the songs and stories of the Seri people. Her father, Jose Astorga, began the world famous Seri tradition of making carvings of native animals out of ironwood and stone. It is a craft tradition which she maintained.

Amalia's words and stories are featured in Efraín of the Sonoran Desert, A Lizard's Life Among the Seri Indians.

The top photo shows Amalia Astorga and Adolfo Burgos, Comca'ac (Seri) being honored as Pillars of the World during the Second Reunion of the Spiritual Guides of the Region in Hermosillo in 201. Indigenous People in Sonora are struggling to maintain their language and culture. The discussions centered on the spiritual well being of Sonora, including water, land, medicines, and all that is part of the culture, said Sonoran Studies Professor Alejandro Aguilar Zeleny.
at November 03, 2014 No comments: