Greg Grey Cloud, Crow Creek Lakota and co-founder of Wica Agli on Rosebud in South Dakota, was free last night after being jailed for sounding out in the US Senate the song of the people whose water and land is threatened by the dirty Keystone XL pipeline. The Keystone XL pipeline vote failed in the US Senate yesterday, after being passed in the US House.
Grey Cloud continued singing as he was knocked to the floor and against the wall and handcuffed with zip-ties. Read article and watch videos:
http://bsnorrell.blogspot.com/2014/11/greg-grey-cloud-free-after-lakota-song.html


Greg Grey Cloud of the Rosebud Sioux bellowed a tribal song wore a headdress, as he was knocked to floor. 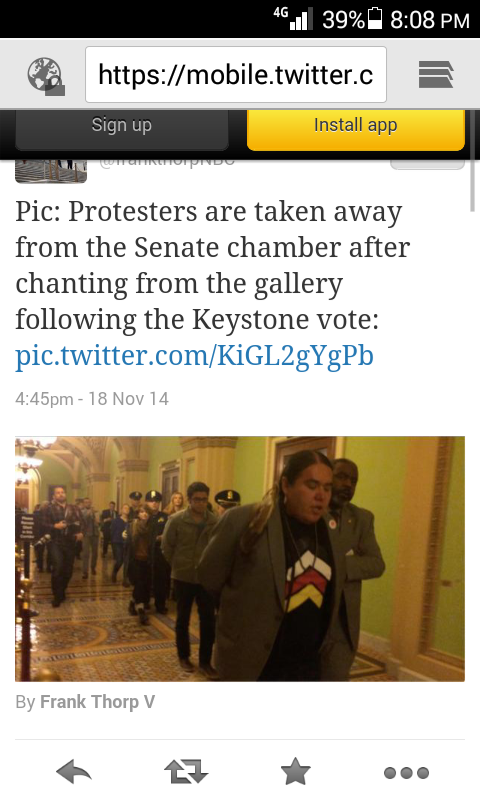 Wica Agli members are in Washington, D.C. to stand in solidarity with President Cyril Scott of the Rosebud Sioux Tribe and the multistate, activist organization, the Cowboy Indian Alliance. On November 14, President Scott issued a statement that declared the House vote in favor of the Keystone XL Pipeline an act of war. Scott said, “We are outraged by the lack of intergovernmental cooperation. We are a sovereign nation, and we are not being treated as such. We will close our reservation borders to the Keystone XL.”
Read more »
at November 18, 2014 No comments: