When Margene Bullcreek stood up to halt the nuclear dump on Skull Valley, her efforts led to new exposures of the nerve gas neighbors next door 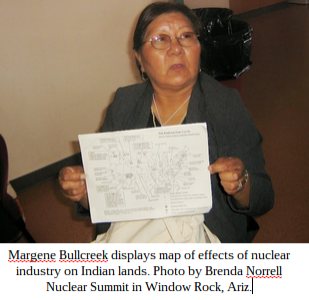 By Brenda Norrell
Censored News
French translation by Christine Prat
Also see KUER Utah news report by Judy Fahys
The passing of Margene Bullcreek, Goshute Shoshone, reminds us of the need to record the stories for future generations. Margene Bullcreek led the fight which halted the nuclear dump on Skull Valley Goshute land in Utah. As this fight was underway in 2005, it led to the exposure of the Goshute's nerve gas neighbors next door, the US Army.
By standing up to halt the desecration and contamination, Margene Bullcreek's efforts led to the following article, which I wrote in 2005. In memory of Margene, who passed to the Spirit World on Sunday, I'm reposting this article here as a reminder of the need to share the stories, to record the words for future generations, and as an example of the ripple effect of standing up for truth.
When the Nuclear Regulatory Commission approved the license for a nuclear storage facility on Skull Valley Goshute tribal land, it prompted new questions about the federal government’s use of the area as a U.S. Army test site for biological and chemical weapons, including nerve gas and anthrax.
From 2005:
Margene Bullcreek, Skull Valley Goshute tribal member and among those protesting nuclear and toxic dumping on Indian lands, said it is time for the government to stop dumping its nuclear waste on Indian people and stop treating them as if they are expendable.
“There is no gain to our prosperity when there is poison spilled. The radioactive waste would bring harm to our medicine wheel in four areas: physical, mental, emotional and spiritual,” said Bullcreek, founder of the community group Ohngo Gaudadeh Devia Awareness.

Please post & distribute. Nia:wen.
MNN. Mar. 3, 2015. The incident in Moscow that killed Boris Nemstov reminds us of the events of one hundred years ago. Archduke Franz Ferdinand of the Hapsburg Dynasty was heir to the Austro-Hungarian throne. They occupied Serbia which had always been a part of the Russian Federation. On June 28, 1914 Ferdinand and his wife Sophie were on their way to visit a hospital in Sarajevo. A young Serb shot and killed them. One month later Austria-Hungary declared war on Serbia. The Serbs called Mother Russia for help. Tsar Nicholas arrived, killed 300,000 Austro-Hungarians and World War I began.

Events were set in motion that led to a war between Germany and her allies and Russia and its Western allies.
Throughout history, Russia, as the mother of Christianity, has constantly been attacked by the same Vatican Khazarian forces. She is continually being called upon to defend her offspring from the forces of the West that are anxious to exploit every inch of the lands they occupy.

“Hey! We only wanted one cub [at first]!”
On February 28, 2015, Nazi Opposition critic in Russia, Boris Nemtsov, was killed. The West instantly blamed his death on Russian President Putin. Like the many current “suicided” bankers, dead men don’t tell lies. Nazi corporatist, Nemtsov, signed up for such an eventuality of being sacrificed on the alter to the gods of corporate war. Those who know the history have always seen the Russians defend themselves and their families.
The Warmongering Harper government pretends to represent the people of Canada. Canadians only want peace. The Ongwe’hon:weh great law of peace is being breeched. Canada has joined the U.S., Britain, France, Germany, Italy and Japan in economic sanctions and expulsions of Russian diplomats. Fighter jets, a naval frigate and military officers have been deployed to train Eastern Europe NATO allies to intimidate and eventually attack Russia.
We Ongwe’hon:weh continue to offer the key to replacing corporatism and war with peace, Teiohateh/Two Row. Get rid of the 51% corporate matrix dictating to 49% so war never ends. When the colonial settlers invaded Ono’ware:geh/Great Turtle Island, we did not take sides. Their greed has no part in the Peace here.