In Memory and Honor of 77 Apache Freedom Freedom Fighters 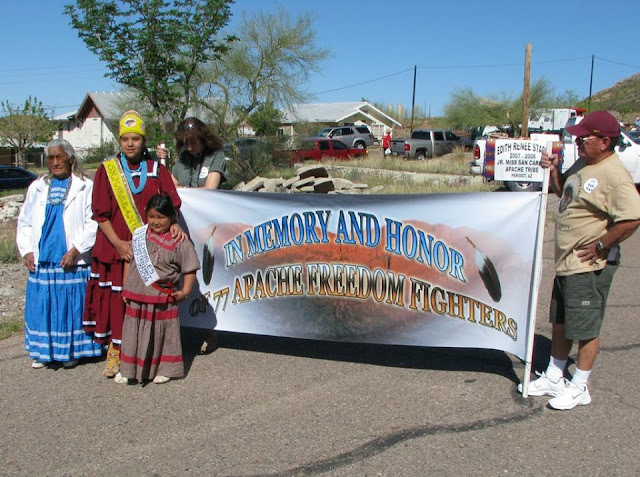 77 APACHE FREEDOM FIGHTERS jumped to their death in the 19th Century at Apache Leap cliffs from Superior, AZ. APACHES OPPOSE DESTRUCTION of Apache Leap, Oak Flat and Ga'an Canyon by the British/Australian mining consortium that destroys the land surrounding holy ancestral and sacred land along with its historical, cultural, environmental and recreational values. PROTECT OAK FLAT! Occupation continues at Chi'Chi'Bilda'Goteel. Edith Starr and her sister, Lorraine Cooley, still protesting today as they were nearly ten years ago. Thank you Edith and Lorraine!
at August 04, 2015 No comments:

Women Never Forgotten: The Murals and Memorials of Ciudad Juarez

Women Never Forgotten: The Murals and Memorials of Ciudad Juarez

By fnsnews | Published August 3, 2015
By Frontera NorteSur
Posted at Censored News with permission
Editor’s Note: As one of our last stories, Frontera NorteSur is proud to publish this photo essay on a quiet cultural revolution that is visually transforming Ciudad Juarez while ensuring that memories and demands of justice for murdered and disappeared women are not swept under the rug.

Near the intersection of Vicente Guerrero and Lopez Mateos in Ciudad Juarez, local artist Maclovio describes a hypnotizing mural that honors three female victims of disappearance and homicide-Esmeralda Castillo Rincon, Rosa Virginia Hernandez Cano and Adriana Sarmiento. Conjuring up a sweeping and turbulent landscape, Maclovio and his helpers place the short lives of three girls and women in a world of militarism and nuclear bombs, migration and femicide, or feminicide- the systemic killing of women.

New Photos! Apache Stronghold at US Capitol by Sandra Rambler 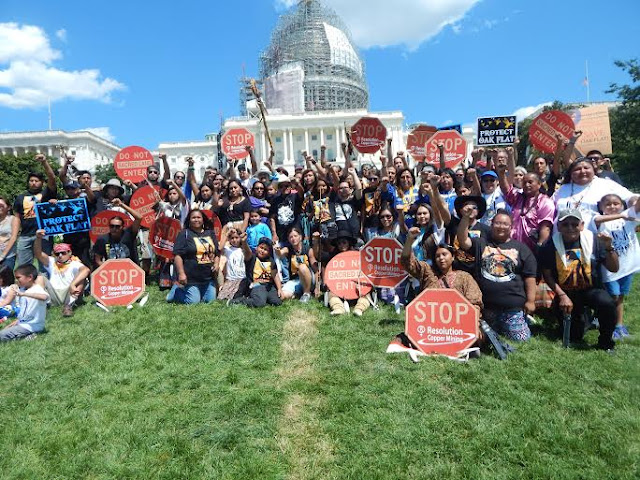 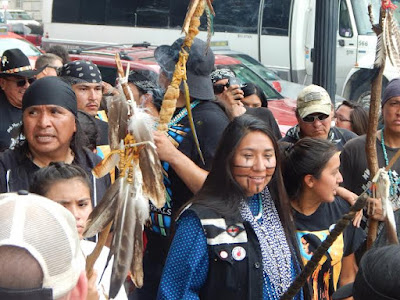 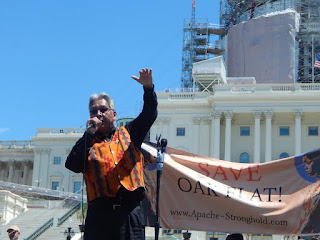 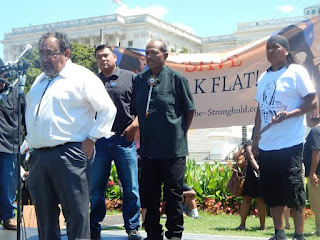 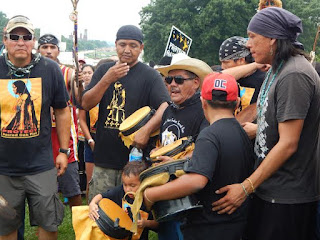 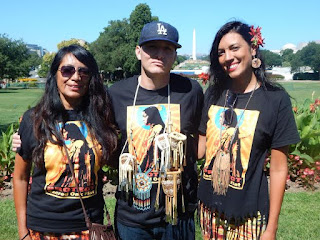 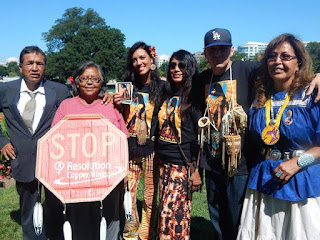 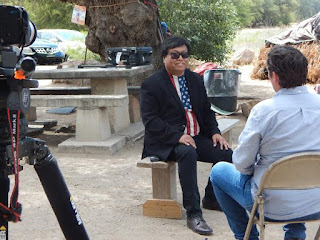 Photo captions from top to bottom:

On 7-21-2015: Members of the San Carlos Apache Tribe are joined by other native tribes in the U.S. and Indigenous Peoples in their march with the Apache Stronghold to from Lafayette Park to the U.S. Capitol in their efforts to repeal the Southeast Arizona Land Exchange which allows U.S. federal land to be handed over to a foreign company, Resolution Copper Company--BHP--Rio Tinto based out of Australia.

On 7-22-2015, U.S. Arizona Congressman, Raul Grijalva addresses the American people gathered for a press conference at the U.S. Capitol in Washington, D.C., while he talks about the H.R. Bill 2811 which he co-sponsored with 17 other Members of the U.S. Congress to repeal the SE Oak Flat Land Exchange.  Joining him on stage were members of the San Carlos Apache Tribal Council, Wendsler Nosie, Sr. (Peridot District); Jonathan Kitcheyan (Bylas District); Mitch Hoffman (Seven Mile District) and present but not pictured were Bernadette Goode (Seven Mile Wash District) and Allred Pike, Jr. (Bylas District).

On 7-22-2015, San Carlos Apache Tribal Chairman, Terry Rambler, praised the "Apache Stronghold" for their successful spiritual journey from sacred and holy Apache land to the U.S. Capitol in an effort to keep protecting ancestral holy Apache land at Oak Flat in Arizona.

On 7-22-2015, members of the Apache Stronghold gathered for a picture at the U.S. Capitol, prior to going to visit AZ Congressman, Paul Gosar's office in Washington, D.C.

On 7-22-2015, San Carlos Apache tribal members, Julia Bekinnie (Bylas), Justin Burshia (New York) and Nanna Farrell (Hawaii) joined the Apache Stronghold in their caravan to Washington, D.C. to urge members of the U.S. Senate and U.S. House of Representatives to repeal Section 3003 of the $585 million National Defense Authorization Act passed last Dec. 2014 which gives away federal land revered as holy and sacred ancestral land to the Apaches and Indigenous Peoples in Southeast Arizona.

On 7-21-2015, members of the San Carlos Apache Tribe were joined by various Native Tribes throughout the U.S. and Indigenous Peoples while joining the Apache Stronghold in their spiritual march from the west lawn of Lafayette Park to the U.S. Capitol in Washington, D.C.

On July 29, San Carlos Apache Vice-Chairman, Tao Etpison was interviewed by an Australian network, Channel 7, at Chi'Chil'Bilda'Goteel (Oak Flat) where Vice-Chairman Etpison gave an overview of the unjust manner in which a rider was snuck through the NDAA which was passed last December 2014, and that the San Carlos Apache Tribe continues to uphold their position in opposing the Southeast Arizona Land Exchange and wholeheartedly supports the efforts of the Apache Stronghold who recently traveled by caravan to Washington, D.C.