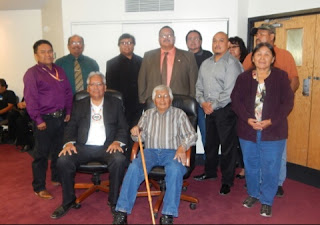 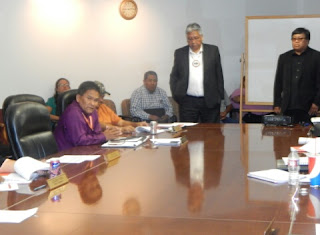 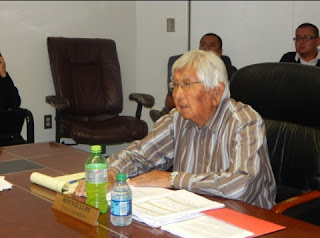 WHITERIVER, Ariz. – On Aug. 5, during their regular meeting, the White Mountain Apache Tribal Council met with San Carlos Apache Tribal Chairman Terry Rambler, and Vice-Chairman Tao Etpison, and reaffirmed their standing resolution passed in May of 2006 to oppose the Southeast Arizona Land Exchange Act, voted to support the repeal of the Land Exchange Act and prohibited tribal departments from accepting donations from Resolution Copper Mining Company.

Prior to the vote, Chairman Rambler gave a power point presentation on the land transfer approved by Congress to give the Oak Flat area, ancestral lands deemed holy and sacred to the San Carlos Apache Tribe and other tribes, to foreign mining conglomerates Rio Tinto PLC (United Kingdom) and BHP LTD (Australia).

“Thank you for allowing us to meet with you today.  Oak Flat is an area considered sacred by Apaches and an area of irreplaceable beauty.  Our elders teach us that the strength of our prayers and ceremonies depend on the land’s health, and our ability to treat everything with respect.  We have always lived by these prayers.  To this day, our lives depend on them.  Apache people have lived, prayed and died in the Oak Flat area since time immemorial,” pointed out Chairman Rambler in his native Apache language.

“In June, Arizona Congressman Raul Grijalva sponsored a bill titled “Save Oak Flat Act,” which will repeal the Land Exchange Act.  Since that time, we have had other Congressional legislatures join as cosponsors and we now have about 29 members of the House of Representatives that are co-sponsoring the bill.  We appreciate Congressman Grijalva and his colleagues that have co-sponsored this bill.”

“Under the Land Exchange Act, the U.S. Dept. of Agriculture must conduct an Environmental Impact Statement (EIS) which is a government-to-government consultation with tribes that are impacted by this Act. Even though the Act says this, in the end, Congress has already approved the land transfer no matter what anyone says.  So, the best option is to just repeal the Act.  The EIS will take some time and it may be up to 15-20 years before the mine will even begin full operation.  We want this process to be transparent so everyone can see the damages this block caving mining method will cause the land, water, and air in the immediate and surrounding areas.”

Chairman Rambler concluded by stating, “Once the mine is constructed and once the mining operation starts, the mine will produce only 342 direct mining jobs in the copper triangle area, which includes San Carlos.  Our new hospital will have 485 direct health care jobs, more than what the Resolution Copper Mine project will produce.  So the question is, is it worth it to destroy the Oak Flat area for only 342 direct mining jobs?”

Vice-Chairman Tao Etpison, also added in his native Apache language, “It is an honor to stand before you and to meet with you on this highly important issue.  We appreciate your continued support.  As our elders have told us, there are certain aspects of our Apache religion that we cannot discuss and make it open to the public.  However, now that we must protect the Oak Flat area from becoming a 2-mile crater, we are forced to disclose the sacred significance of Oak Flat and Gaan Canyon.”

“Chi’Chil’Bilda’Goteel (Oak Flat) has hundreds of emery oak trees that produce acorn which our Apache people have used for decades.  This area produces medical herbs for our Apache People.  There is also wildlife in the area that need to be protected as well.  We continue to conduct our religious ceremonies at Oak Flat.”

“The block-cave mining that is proposed by Resolution Copper Company will be too deep to mine.  Due to this, Resolution Copper has indicated that it will utilize robotics rather than human resources.  This will result in the destruction of Oak Flat area caving into a 2-mile crater.”

“Not only have other tribes joined us to repeal the land exchange, but many American people are contacting their Representatives and Senators urging them to support the repeal of the land exchange.”

“On November 9, 1871 the Apache reserve was established that encompassed Oak Flat on the western end of the reservation.  Copper was then discovered and illegal mining occurred in this area.  In an attempt to legalize this mining, on April 27, 1876 President Grant reduced the reservation that eviscerated Oak Flat from the Apache reserve.  However, Oak Flat was not a complete loss because it became a federally protected area by the National Forest Service.  Apaches were thus able to continue to use Oak Flat for ceremonial and other purposes.  If the land exchange is not repealed, Oak Flat will become a 2-mile crater and no longer available to our Apache people.”

Councilwoman Larzelere said in her native Apache language, “We recently had an Apache Alliance meeting and we passed a resolution supporting the repeal of the land exchange.  We, as Apaches have been hurt for too long and we have been robbed not only of our land, water but also of our natural resources.”

Councilman Declay added, “Thank you, Chairman Rambler and Vice-Chairman Etpison for enlightening us with the history of Oak Flat.  As I recall, the White Mountain Apache Tribe was the first tribe to support the San Carlos Apache Tribe in their opposition to the land exchange on May 17, 2006 when we passed the resolution.”

“Recently, there was publicity about our kids receiving money from Resolution Copper Company and I went to see the Education Director who is the Lead Advisor to our Youth Council.”

“We have had non-Apaches planning to take away our natural resources, our water and our land for a long time and this is what our ancestors warned us about.”

“The largest Native American organization, NCAI, supports our sister tribe, San Carlos Apaches, so I recommend that we continue to support them.”

Councilman Beach also pointed out in his native Apache language, “Thank you, Chairman Rambler and Vice-Chairman Etpison.  I stand with Councilman Declay.  We were the first ones to support you when the Oak Flat controversy began in 2006.  It was a unanimous vote with no opposition.”

“We are related like brothers and sisters and I am voting to vote to support you.  Thank you.”

Vice-Chairman Valesquez said, “I support the resolution that is presented.  We all know the passion Congressman Grijalva has in helping us and we appreciate it.”

“As representatives of the White Mountain Apache Tribe, we need to stand strong with the San Carlos Apache Tribe.”

“I wanted to point out that I have not talked to any of Resolution Copper Company’s representatives.  This is detrimental to us as Apaches.”

“In 20 years, none of us will be serving on the Tribal Council but it will be our children and grandchildren that will be here and we don’t want to make things any tougher for them than it already is.”

“We, as Apaches, we love our land, especially our water because we are taught that water is life and water is holy.”

“Our beliefs include the importance of preserving and promoting our Apache language, songs and culture just as you do.”

“I have seen you all lobbying in Washington, D.C. and I will take the lead in making the motion and thank you, once again.”

Councilman Kasey spoke briefly about the Bureau of Indian Affairs and said, “It is important that we support one another as Apaches and I will be ready to second the motion.”

Councilman Alsenay said, “I want you to know that I support you, our Apache relatives from Sen’Gaa (San Carlos) and that we need to keep helping each other out.”

“There is already a resolution in place and I support you.  In the Apache way, there is sand painting done that comes with our religious Apache way of life and that is something sacred to us.  And Oak Flat is sacred to us in that way.”

Chairman Lupe said in his native Apache language, “This is how leaders help each other out.  This is what we advocate for in our Apache Alliance meetings, to stand with one another, with no negativity.”

“We have to think about the future of our children and grandchildren.  And we pray for their future as well.”

“In good faith, when we stand united, we are a strong force that you cannot reckon with.”

“I appreciate you, Chairman Rambler and Vice Chairman Etpison, for coming here and let’s keep our doors open to one another.”

“As Apaches, we should have one voice as one people and one nation!”

“I did not like reading the recent op-ed article in the Arizona Republic about Oak Flat and it’s that type of negativity that causes dissension and it is not healthy for us.” 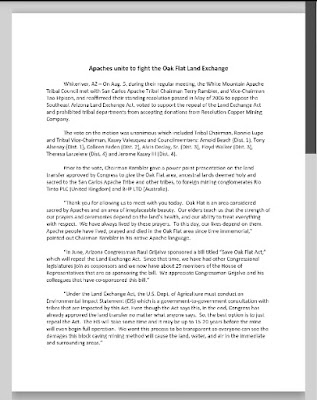 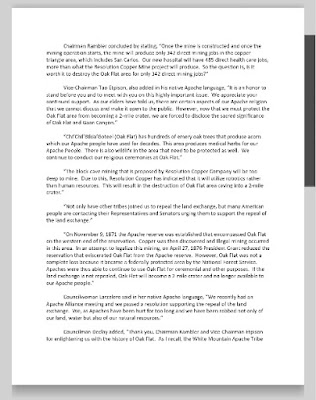 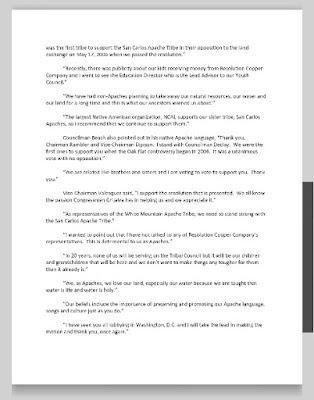 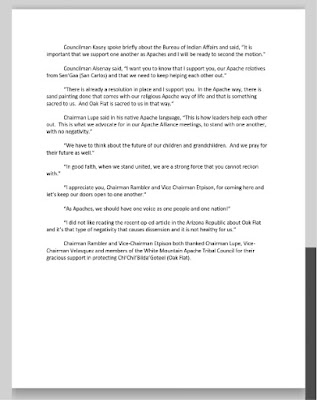 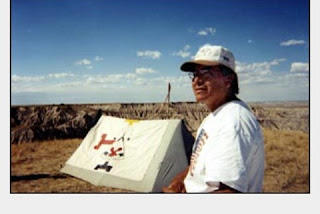 Although I wrote this article 12 years ago, I'm republishing it now in memory of Ed Two Bulls, who passed to the Spirit World in 2011. Photo: Ed's son Tony on the Stronghold where his grandfather was a Ghost Dancer.


BADLANDS, S.D. – When the Ghost Dance arrived in 1890, Lakota danced to bring back the buffalo and a good way of life. They were persecuted and fled to the Badlands to a place Lakota call "Oonakizin" or the Stronghold.


"Here they made their last stand. It was the last pocket of resistance for our ancestors and their families," said Ed Two Bulls, Jr., Oglala Lakota.


Men, women, children and old people were fired upon by the Home Guard, now the South Dakota National Guard. When the bullets stopped, at least 70 Ghost Dancers were dead.


"It is said that the militia went upon this plateau and threw frozen bodies off of the sides of the Stronghold Table.


"My grandfather was a Ghost Dancer and for that he along with Kicking Bear was sent to prison," Two Bulls said.


From his home on Red Shirt Table, seated in his wheelchair, Two Bulls faces the Badlands, where his grandfather was a Ghost Dancer. Today his wife Lovey and sons carry on patrols to protect the massacre site and the Ghost Dancers resting in shallow graves from the onslaught of a fossil dig.