Houston! We have a problem!

This morning Diane Wilson was arrested after locking her neck to a tanker truck attempting to enter the Valero Refinery in Houston.

“All my life the Gulf Coast has been an environmental sacrifice zone, and enough is enough. Keystone XL will bring the dirtiest fuel on the planet right down to the Gulf, where already overburdened communities like Manchester will be forced to suffer even more. After decades of toxic air in Manchester, I refuse to just let them continue to punish this community. I won’t eat until Valero divests from Keystone XL.”

See more photos and updates on our blog: http://tarsandsblockade.org/13th-action/ 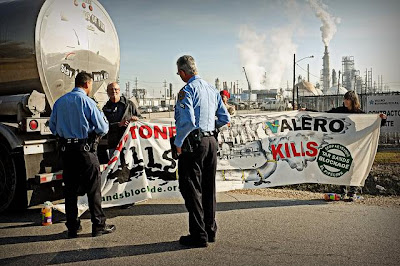 Tarsands Blockade
http://www.tarsandsblockade.org
UPDATE: 10:40AM – Community Rallies in Support
Residents from the Manchester community rally to support Diane and Bob who have locked themselves to trucks entering the Valero refinery. They chant: “What do we want? Clean air! When do we want it? NOW!” and “Shut down Valero! Protect Manchester!”
UPDATE 11:30 AM – Diane and Bob Launch Their Hunger Strike in Jail to Get Valero to Divest from KXL
“Keystone XL will bring the dirtiest fuel on the planet right down to the Gulf, where already overburdened communities like Manchester will be forced to suffer even more,” said Diane. “After decades of toxic air in Manchester, I refuse to just let them continue to punish this community. I won’t eat until Valero divests from Keystone XL.”
Read Diane and Bob’s full bios here. See more photos from today’s action here.
UPDATE 11:00 AM – Diane Has Been Removed From the Truck and Arrested
Diane Wilson, who locked her neck to a tanker truck entering the Valero oil refinery, has been arrested for her heroic act. Houston Police and Fire Department cut the lock around her neck off with hydraulic ”jaws of life.”
Community residents chanting nearby: “Arrest Valero! Pollution is a crime! Arrest Valero, Not Diane” and “Valero, Valero, what do you say? How much cancer did you cause today?”
UPDATE: 10:30AM – Bob Has Been Declared “Under Arrest”, Holding Strong
Bob and Diane have locked themselves to trucks entering the Valero refinery in Houston and have blocked access to the polluting facility. Valero is one of the largest investors in Keystone XL. About a dozen police are on the scene and have declared Bob under arrest for “blocking a roadway”, but he is holding strong and remains locked to the truck.
UPDATE: 10:00AM – About a Dozen Police Are on the Scene
UPDATE: 9:30AM – Houston Police and Fire Department Arrive on the Scene
Houston Police Department has bolt cutters out and is threatening to cut Bob from the Valero truck. Follow the action live on Twitter.
UPDATE: 9AM – Diane Wilson and Bob Lindsey Jr. Lock Themselves to Trucks Outside Valero’s Houston Refinery

Activists Begin Sustained Hunger Strike, Demand That Valero Divest from Keystone XL Pipeline
HOUSTON, TX – THURSDAY, NOVEMBER 28, 2012 8:00AM –-Longtime Gulf Coast activists Diane Wilson and Bob Lindsey Jr. have locked their necks to oil tanker trucks destined for Valero’s Houston Refinery in solidarity with Tar Sands Blockade’s protests of TransCanada’s Keystone XL pipeline. Valero Energy Corp. is among the largest investors in TransCanada’s toxic tar sands pipeline that will terminate near the community of Manchester, located in the shadow of Valero’s refinery. Not only are Wilson and Lindsey blockading the Valero refinery, the two lifelong friends have also vowed to begin a sustained hunger strike demanding that Valero divest from Keystone XL and invest that money into the health and well-being of the people of Manchester.
With a 90% Latino population, Manchester’s relationship with the Valero refinery is a textbook case of environmental racism. Residents there have suffered through decades of premature deaths, cancers, asthma and other diseases attributable to the refinery emissions. With little financial support for lawsuits and without the political agency necessary to legislatively reign-in criminal polluters like Valero, the community suffers while Valero posts record profits.
at November 29, 2012