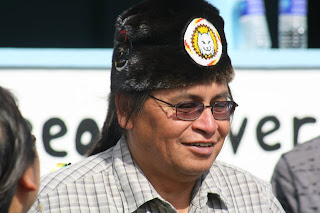 First Nation Terrance Nelson exposes Canada's abuse of First Nations, floods and mouldy housing
By Terrance Nelson
First Nation Roseau River Ojibwe
Censored News
http://www.bsnorrell.blogspot.com
Nazanin Afshin-Jam made a big deal of my going to Iran and slammed my trip as covering up the Iranian Human Rights record. She has asked for an invitation to Manitoba to talk to the Chiefs who support me. She wants to tell the Chiefs about Iranian Human Rights record.
I invite Nazanin to Manitoba. Come and see for yourself Canada's human rights violations and by the way bring your husband Conservative Minister of Defence Peter McKay with you. You can visit Dakota Plains, one of the poorest First Nations in Manitoba and you can visit Lake St. Martin. Both communities are flooded. You can see for yourself the mouldly housing that people are forced to live in and the evacuees who are living on allowances of around $200 a month.
Talk about covering up human rights records. Is Nazanin really a champion of human rights or is she just a pawn who only cares to beat up on Iranians? Will she actually tackle Canada's human rights record on Indigenous peoples.
I will be speaking at the protest organized by the Lake St. Martin evacuees today at 1 p.m. at the Manitoba Legislature. I will inform them that the Ministry of Human Rights in Iran has a open invitation to indigenous women from Canada to visit Iran. The trip can be paid for by NGOs and the three powerful women in the Ministry of Human Rights in Iran have promised to take indigenous women from Canada to the United Nations to present a joint statement on the six hundred murdered and missing indigenous women in Canada. The Iranian Human Rights Ministry has also been very open on the Human Rights record on women in Iran and invites indigenous women in Canada to visit Iran and see for themselves, how Iranian women are treated, don't just rely on the western media to tell you about Iran.
at November 02, 2012